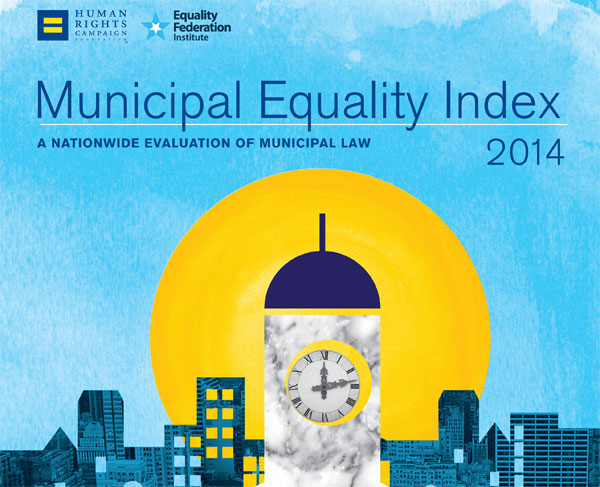 When the Human Rights Campaign released its annual Municipal Equality Index (MEI) last week, many in San Antonio’s LGBT community were puzzled as to why the city’s score had gone from 86 last year to 72 this time around.

Now in it’s third year, the MEI scores cities on their nondiscrimination laws, their recognition of LGBT relationships, their LGBT policies, the services they offer to LGBT citizens, the police department’s relationship with LGBTs and the “city leadership’s commitment to fully include the LGBT community and to advocate for full equality.”

San Antonio came in fourth among Texas cities with Austin getting a score of 100, Dallas a score of 91 and Ft. Worth a score of 83. A total of 22 Texas cities were rated in this year’s MEI. Four of them Irving, Lubbock, McAllen and Mesquite got scores of zero.

San Antonio, with its long history as a conservative bastion, might have received a much lower score in 2012 if not for the fact that it had a gay-friendly police chief, mayor and several LGBT-friendly City Council members.

Then-Mayor Castro was alarmed by San Antonio’s ranking. “While there is no doubt that San Antonio has made significant strides toward LGBT equality in recent years, the HRC’S Equality Index is a reminder that opportunities for improving our outreach and inclusiveness still exist,” he told QSanAntonio at the time. Castro immediately appointed, Adam Greenup, one of his staffers, as the LGBT liaison to his office.

“Last year San Antonio took a major step toward full equality by granting domestic partner benefits to our gay and straight city employees. It is my hope that by working together, we can continue the progress into the coming year by revisiting our Non-Discrimination policies to include protections for gay, lesbian and transgendered residents throughout our city in employment, housing and public accommodations,” Mayor Castro said.

Then-Mayor Castro was even asked to contribute an essay for the MEI. In it he wrote, “. . . San Antonio is the new face of the American Dream. As the nation’s largest city (as well as one of the fastest growing cities in the United States), San Antonio has taken steps to ensure that there are no second class citizens . . . By taking a proactive approach, we have made it perfectly clear that San Antonio is a welcoming and inviting city that is ready to compete in the 21st century global economy.”

The 2013 score put San Antonio in third place in the state behind Ft. Worth which scored 91 and Austin which scored 100.

The lowering of San Antonio’s MEI score appears to be due in part to a revision of the Municipality as Employer and Municipal Services sections. In all other areas, the city’s score was identical to last year’s.

In 2013, San Antonio scored 22 out of 26 points on the Municipality as Employer section. This year’s score was 20 out of 29. In this part of the assessment, the city got zero points for “transgender-inclusive healthcare benefits”, “equivalent family leave”, and “city contractor benefits ordinance.”

In the Municipal Services section the city scored 5 out of 15 points compared to 15 out of 18 points in 2013. The city got zero points for not having a human rights commission and zero for a lack of “enumerated anti-bullying policies.”

Some of the criteria in the sections noted above were changed or weighted differently than in the past. Some points the city got in these sections last time were lower or scored at zero.

Below are the comparisons for the past three years of San Antonio scores.

Tired of waking up to the same old stuff day after day? The only cure for that is reVAMP, San...