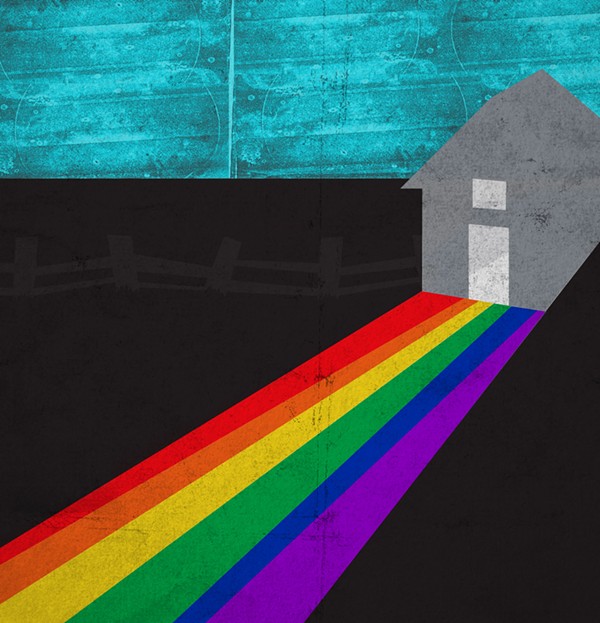 The mass shooting at an Orlando gay club this month killed 49 people, wounded at least 50 others, and, in the minds of many within the LGBTQ community, violated a sacred space. In his comments following the tragedy, President Barack Obama called the Pulse nightclub, the site of the massacre, a “sanctuary,” a place to sing, dance, “and most importantly, to be who you truly are” that had been violated by a horrific act of violence.

While a hideous reminder of unvarnished hate, the shooting also underscored another stark reality for many in the LGBTQ community: Safe spaces are really hard to come by. That’s especially true for gay, trans and queer teenagers who are homeless or at risk of ending up on the streets, oftentimes because of family rejection or parents who kick them out because of who they are. According to researchers, LGBTQ youth are vastly overrepresented in the homeless population; according to one national survey, they comprise about 40 percent of people served by agencies that work with the homeless. The national outreach organization Stand Up For Kids estimates that out of about 1,000 homeless youth in the San Antonio area, half identify as LGBTQ.

The need for a safe space for the most vulnerable kids from an already marginalized group is what led to the creation San Antonio’s Thrive Youth Center, which houses and helps LGBTQ youth who would otherwise be on the streets. It’s one of just four shelters in the country specifically geared toward helping them, despite research that hints at the much larger need.

The single hallway on the ground floor at Haven for Hope, San Antonio’s sprawling homeless services campus, has become a refuge of sorts, says Thrive Center director Sandra Whitley, who many of the shelter’s eight residents affectionately call “Miss Sandy.” “These kids don’t have anywhere else to go, and most, especially the transgender ones, would simply not make it in a regular homeless shelter,” she told the San Antonio Current. “Many other places, if you show up and you’re trans, they’ll just say they’re full, even if they’re not.”

The U.S. Department of Health and Human Services has acknowledged that LGBTQ kids live in a society that “discriminates against and stigmatizes” them, making gay, trans and queer kids more vulnerable to, say, depression and other mental illnesses. According to the U.S. Centers for Disease Control and Prevention, one national survey found that “lesbian, gay, and bisexual youth were more than twice as likely to have attempted suicide as their heterosexual peers.” While there’s a dearth of good studies on transgender youth, one suggests that as many as a quarter of trans kids report suicide attempts. Researchers worry that many of those who flee family or are kicked out of their homes because of rejection are eventually forced into “survival sex” in order to get food, clothes, or a place to sleep.

Whitley says homelessness exacerbates other problems LGBTQ youth already face. “There’s an additional stigma that comes with being homeless,” she said. “Imagine you’re trans and homeless … It’s easy to feel like no one will ever look at you like a normal person.”

Which is probably why many of the young people who have landed at Thrive say it’s not just a shelter, but rather a safe space where they can explore and discover who they truly are.

While Jessica Zuniga didn’t start to transition until she was a teenager, she knew she didn’t feel like a boy growing up.

When Zuniga was 10, her mother forced her older brother to ask if she was gay. Zuniga said yes, not really sure what she was. “I found out from a very early age that who I was upset my mother, that I wasn’t going to be the son she wanted,” Zuniga told the Current. “I found out early on that a mother’s love is not unconditional.”

While Zuniga’s mother was distant from then on, her father bounced in and out of lockup. By the time she was a teenager, she’d started to come into her own, at first just dressing more androgynous. The change didn’t exactly attract good attention in the Rio Grande Valley, where she grew up for most of her childhood. The year before Zuniga’s senior year in high school, she was raped. While she’d hoped for some sympathy from her mom, she remembers being at home one day, crying with a friend not long after the assault.

“You choose to act the way you act, to dress the way you dress,” Zuniga recalls her mother saying. “You deserve what you get.” Years later, Zuniga’s mother would tell her she was afraid to let her be around her little sister. One time, when her father visited after getting out of prison, he told her, “You know you’re going to die of AIDS one day, right?”

Researchers say family rejection appears to be the main reason many LGBTQ kids end up in some incredibly volatile and vulnerable situations, cycling in and out of homelessness or staying with people who might take advantage of them. Aiden Schmidt, a 20-year-old trans man now living at the Thrive shelter, says he bounced in and out of shelters and for a while lived out of his car. “I didn’t have anywhere to go,” he said. “My family’s not understanding of who I am.”

Zuniga floundered her last year of high school and eventually enrolled in a community college program in the Valley. That’s when she became aware not only of the rejection LGBTQ people face, but also the violence they’re often subjected to. She remembers reading for the first time about the death of Matthew Shepard, the 21-year-old gay man brutally beaten, tortured, and left to die in Wyoming in 1998. “I started to feel this anxiety because I realized people were being murdered because they were like me,” she says.

Zuniga eventually moved to San Antonio after her first year of college, saying her mother’s rejection had put her in a deep depression. She was mid-transition, didn’t have a place to stay, and reached out to aunts and uncles in the area for help. They wouldn’t return her calls. Things got harder when finding a job mid-transition proved to be more difficult than she’d imagined.
“I was wearing makeup and skirts, but my hair was still short,” she says. “I was trying to be my true self, but the problem is I wasn’t ‘passable’ enough for people.” Most employers would look at her paperwork and insist on calling her by her “actual” name, she says. One asked if she could come back in pants and stop wearing nail polish. When she finally found one part-time job, her boss wouldn’t let her use the restrooms on site, instead directing her to a building next door that had a private one.

Without anywhere else to go, for a while Aiden Schmidt bounced in and out of one of the city’s remaining homeless shelters, Prospects Courtyard, a part of Haven for Hope that many say takes on a prison-like atmosphere at night. Schmidt said he felt like a sitting target.

“I’m still biologically a girl, but I look like a young boy,” he said. While transitioning, he didn’t feel comfortable using the men’s restroom and shower — “I’ve had grown-ass men beat on me because of what I look like … You think I’d be safe in there?” he says. The couple times he accompanied his girlfriend, another homeless woman, into the women’s restroom, he says other men chased and tried to assault him.

Zuniga, on the other hand, says she knew she couldn’t live in a place like Prospects. So she did what she says many other women like her are forced to do: sex work.

“I did it to survive,” she says. “And I hated myself after every time.” Now on hormones, her appearance was becoming less androgynous, more feminine. However, the depression grew worse when she realized her identity was a fetish for some people. “Guys will hit on you and say you’re beautiful until they realize you’re trans,” she says. “As soon as they realize that, I’m a sexual object.”

It was sex work that ultimately led to Zuniga’s arrest two years ago. She didn’t have a place to stay and had gone two days without eating. It had been days since she’d taken a shower since, as a trans woman, she didn’t feel she was safe taking one in any of the city’s homeless shelters. While she was walking near San Pedro Park, a guy pulled over and flagged her down. “After talking for a while, he said he’d give me money if I just showered with him,” she says. “I didn’t really have another option that night.”

The car ride was taking too long, and Zuniga couldn’t figure out where he was taking her. Eventually she saw the lights from a police cruiser in the rearview mirror.

By the time Athena Rose started to transition, she was 16 and had just been put in a state-licensed treatment center for foster kids. It’s unclear why she was put there, other than possibly her volatile family background — taken into state custody at age 4, she was ultimately abandoned by the family that adopted her and her sister before cycling back into state care.

“I was just starting to dress feminine, I wasn’t even that confident yet,” Rose said. She started experimenting with more androgynous clothes and a bit of makeup — eyeliner, mascara, maybe a little lipstick. “They stopped that real quick,” she said of the facility staff. “Basically, they were like, ‘You can’t be doing that shit here.’” Eventually, she entered a group home for kids about to age out of foster care. With nowhere else to go, Rose says she was about to end up on the street before she found the Thrive center. At 18, she says she feels lucky to have found a place so early on in her life that supports her transition.

“So many people transition so late in life,” she says. “I found a place to discover myself early. I get to be myself for most of my life now.”

Sandra Whitley, the center’s director, says it’s not just that LGBTQ kids are more vulnerable and likely to end up on the street because of who they are, but also that homelessness can make it difficult for them to process and understand that identity. As Rose put it, “Growing up, I had a lot of other stuff going on, so I didn’t have a lot of time for self-reflection.”

“I feel like I’ve always been a girl, but the places I’ve been wouldn’t let me acknowledge that,” she said. “I can do that here.”

Not long after her arrest for prostitution, Zuniga ended up back at the Thrive center. It was there she found help not only expunging her criminal record, but also legally changing her name and gender markers.

More than that, Zuniga says the Thrive center gave her a safe space to process her transition and realize who she truly is. Before, she says, she contemplated suicide, at risk of becoming yet another statistic.

Zuniga has since found a steady marketing job and plans to go back to college to finish her degree in psychology. The Thrive shelter, she says, “gave me someplace safe, a place to work on myself.”

Michael Barajas is editor of the San Antonio Current

A transgender woman says she was left wondering if the pharmacist at the Walmart store in San Marcos, Texas is...