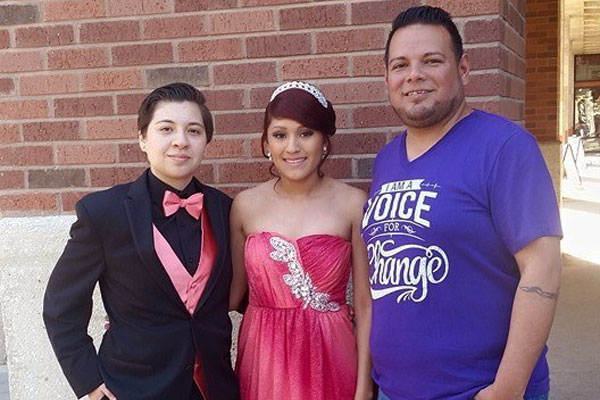 Samantha Arielle Lopez and her prom date pose for a photo with Robert Salcido of the S.A. LGBT Chamber of Commerce and Equality Texas, before going into the Southwest High School prom at the Pearl Stable on May 2. (Courtesy photo)

The parents of a lesbian student, with help from a representative from the San Antonio LGBT Chamber of Commerce, were able to convince the principal of Southwest High School to change the school’s prom dress code so the student could attend the event wearing a tuxedo.

Samantha Arielle Lopez, an 18-year-old senior, was told by school officials that she could not wear a tuxedo to the Southwest H.S. prom on May 2. In fact, when she purchased her prom ticket last month she was asked to sign a form which said she promised to wear a dress to the event. Lopez refused to sign the form and told her mom about the dilemma.

Lopez’s mom, Patricia Olivo, says she supports her daughter one hundred percent. She told Out In SA that she tried to discuss the matter with the school’s principal, Paul V. Black, but was referred to a counselor who told her that if Samantha did not want to wear a dress, she would have to wear a woman’s suit or something that was gender appropriate.

Olivo contacted GLAAD and the LGBT Chamber of Commerce to ask for help. Robert Salcido, the chamber’s vice president who also works for Equality Texas as a field organizer, got back to Olivo and told her that her daughter should be able to wear a tuxedo to the prom.

Olivo and her husband (Lopez’s stepfather), Lopez and Salcido met with Principal Black to discuss the policy. Olivo says, “I told him my daughter is a good kid. She’s never gotten in trouble. She gets good grades and is well-liked by her classmates. The only trouble she’s had with bullying has come from teachers and staff. A teacher once asked Samantha, ‘Are you him or her?'”

Black told Lopez’s parents the school’s rules were a matter of community standards — that the community was not ready for this type of change. However, Salcido insisted the school reconsider its decision.

Salcido cited a passage from the Lambda Legal web site that says “. . . not allowing a female student to wear a tuxedo or a male student to wear a dress may subject the school to legal liability, including a sex discrimination claim under state education laws, antidiscrimination laws, Title IX or the U.S. Constitution. The right to express gender identity through otherwise appropriate clothing is also supported by the First Amendment . . .”

On April 29, just three days before the prom, Principal Black phoned Olivo to tell her the school had changed the dress code and Samantha could wear a tuxedo to the prom.

“You have made a huge impact on my daughter just by your presence and support,” Olivo told Salcido in an email. “Because of your help my daughter feels more confident within herself and now is more secure to be a voice not only for herself but other students too.”

Olivo says her daughter was overjoyed by the decision, adding that the only downside was the school did not share their decision with the student body. As a result, some lesbian students who had hoped to wear tuxedos to the prom ended up attending in dresses because the school never let them know the rule had changed.

Dr. Delia Bullock to SAAF board: Explain why David Ewell was fired

Dear San Antonio AIDS Foundation Board Members, My name is Delia Bullock and I am a local internal medicine doctor...