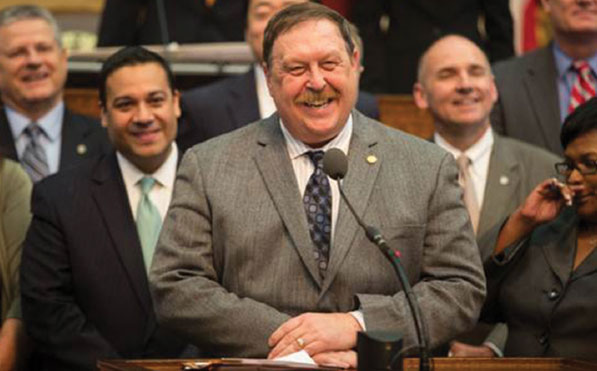 State Rep. Cecil Bell Jr. has submitted a bill to the Texas House that would deny marriage licenses to same-sex couples.

Perhaps anticipating that marriage equality could soon be a reality in Texas, a member of the state House of Representatives has submitted a bill that would deny the funding and issuing of marriage licenses for same sex couples.

State Rep. Cecil Bell Jr., a Republican from Magnolia, Texas is the author of House Bill 623, cited as the Preservation of Sovereignty and Marriage Act.

The bill would forbid the use of state and local taxpayer funds to support the licensing of same-sex marriage. It would additionally forbid state and local government employees from issuing licenses under the threat of losing their salaries and pensions.

Under Bell’s bill, courts in the state could dismiss any legal action that relates to couples seeking licenses declaring that, “The State is not subject to suit in law or equity pursuant to the eleventh amendment of the United States Constitution for complying with the provisions of this section, regardless of a contrary federal court ruling.”

In a press release, Bell defended his bill saying:

When I was elected, I made a promise to my constituents to fight to protect our traditional values and to stand strong in the defense of our constitutional rights as Texans and Americans. Texas is a sovereign state and our citizens have the right to define marriage. We as Texans voted in 2005 to define marriage as being solely between a man and a woman. In Texas marriage is sacred and traditional families are recognized as the fabric of our society.

Federal Courts have increasingly found that state prohibitions on the freedom to marry violate constitutional protections of equal protection under the law. In anticipation of federal courts finding Texas’ anti-marriage laws unconstitutional, HB 623 punishes state employees who would follow the law by issuing marriage licenses to loving couples. The bill would also attempt to exempt the State of Texas from Constitutional requirements.

Tell Cecil Bell that Texas and Texans respect the constitution, respect the rule of law and respect the right of loving couples to make their own decisions absent unnecessary government intervention.

The bill is the latest anti-LGBT legislation to be submitted for consideration in the State Legislature.

On November 10, State Senator Donna Campbell (R-New Braunfels) proposed a constitutional amendment that would make it legal for Texas businesses to fire LGBT employees and turn away LGBT customers if their religious beliefs compel them to do so.

On December 10, Rep. Jason Villalba (R-Dallas) filed House Joint Resolution 55, which is similar but not identical to Campbell’s bill.

In commenting on his bill, Villalba told WOAI Radio, “It is time for those who support the First Amendment to step up and confront those who seek to eliminate every vestige of our religious heritage from our town squares and public schools.”

Even if these bills are passed, they will face a legal challenge and most likely be struck down in the courts. The larger question is why are state lawmakers focusing on anti-LGBT legislation when there are more important issues at hand?

After reading the bill, San Antonio attorney Justin Nichols commented, “Besides being poorly written and patently in violation of the Texas Constitution, Rep. Bell’s bill is a waste of legislative time and priorities. If the House were a classroom, the teacher would be tapping the chalkboard calling on Mr. Bell to pay attention to his classwork and stop passing notes. Speaking of classrooms, I must wonder if Rep. Bell has any plan on how we’re going to fund those.”

“Hey, a girl’s gotta eat!” Rene announces as we hop in my car and speed off to Ramona’s Café to...