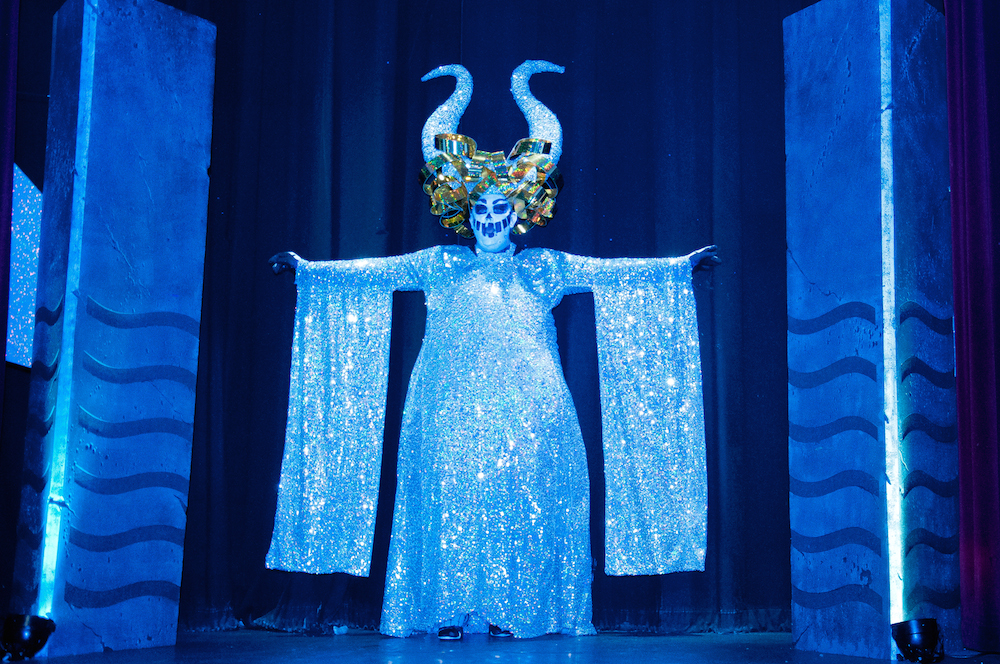 Rene announces as we hop in my car and speed off to Ramona’s Café to talk about the wild success of his epic San Antonio ball. Yep, I’m talking about the the Annual Dia de los Muertos Ball Presented By Rene Roberts. You know the one, right?

Rene has been my hair guy forever (and the reason I wear a hat in public when I don’t have the patience for styling it; I’m not allowed to be bad advertising for him!) I’ve been attending his ball every year and having a blast, but never heard the full story of how it came into being.

Rene had been involved with Cornyation for 10 years and a business owner in town for 15  when people started asking him and his friends to show up for Dia de los Muertos parties in full drag. He would show up and realize he was the only one having this much fun and decided to make an event of it … one that gave back the community that raised him.

Rene credits many of his own costume ideas to the strong women in his family who have passed over the years. Dia de los Muertos became the time to honor their strength and their spirit in performance. This may sound a bit maudlin, but the show is anything but. Rene infuses his shows with political commentary, satire, and heckling … but also an enormous amount of fun.

For the record, he is the only person alive who is allowed to throw Chiclets at my head (or dye my hair a color he’s seen on America’s Next Top Model the night before). 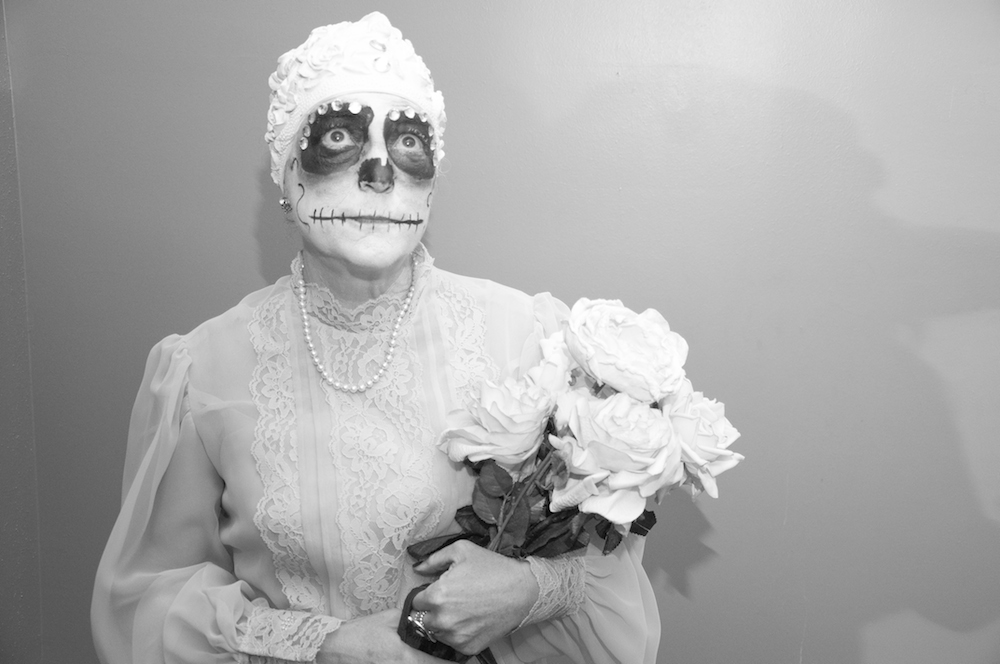 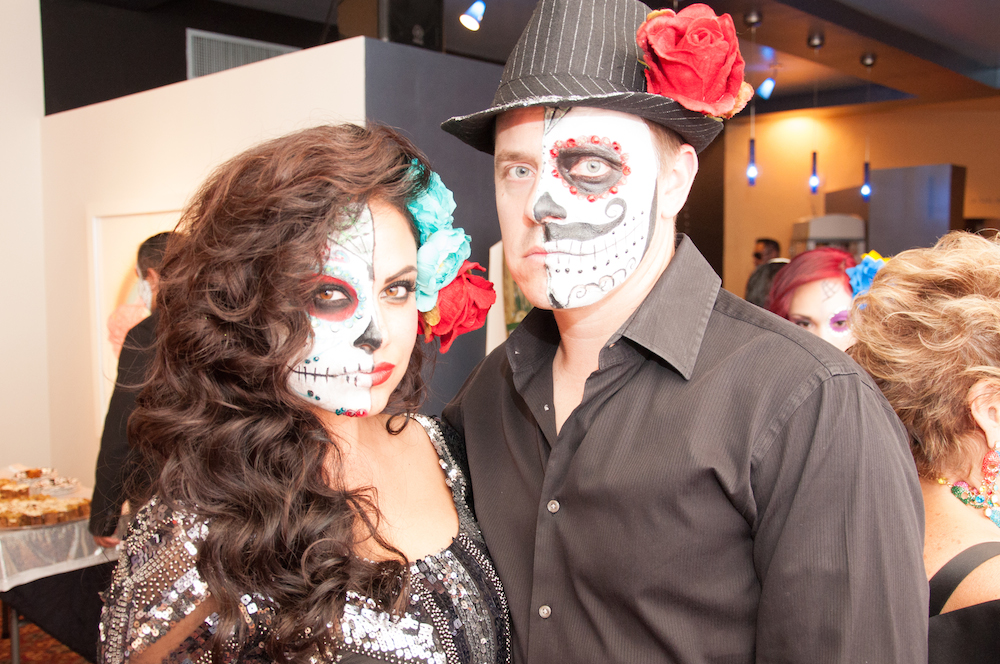 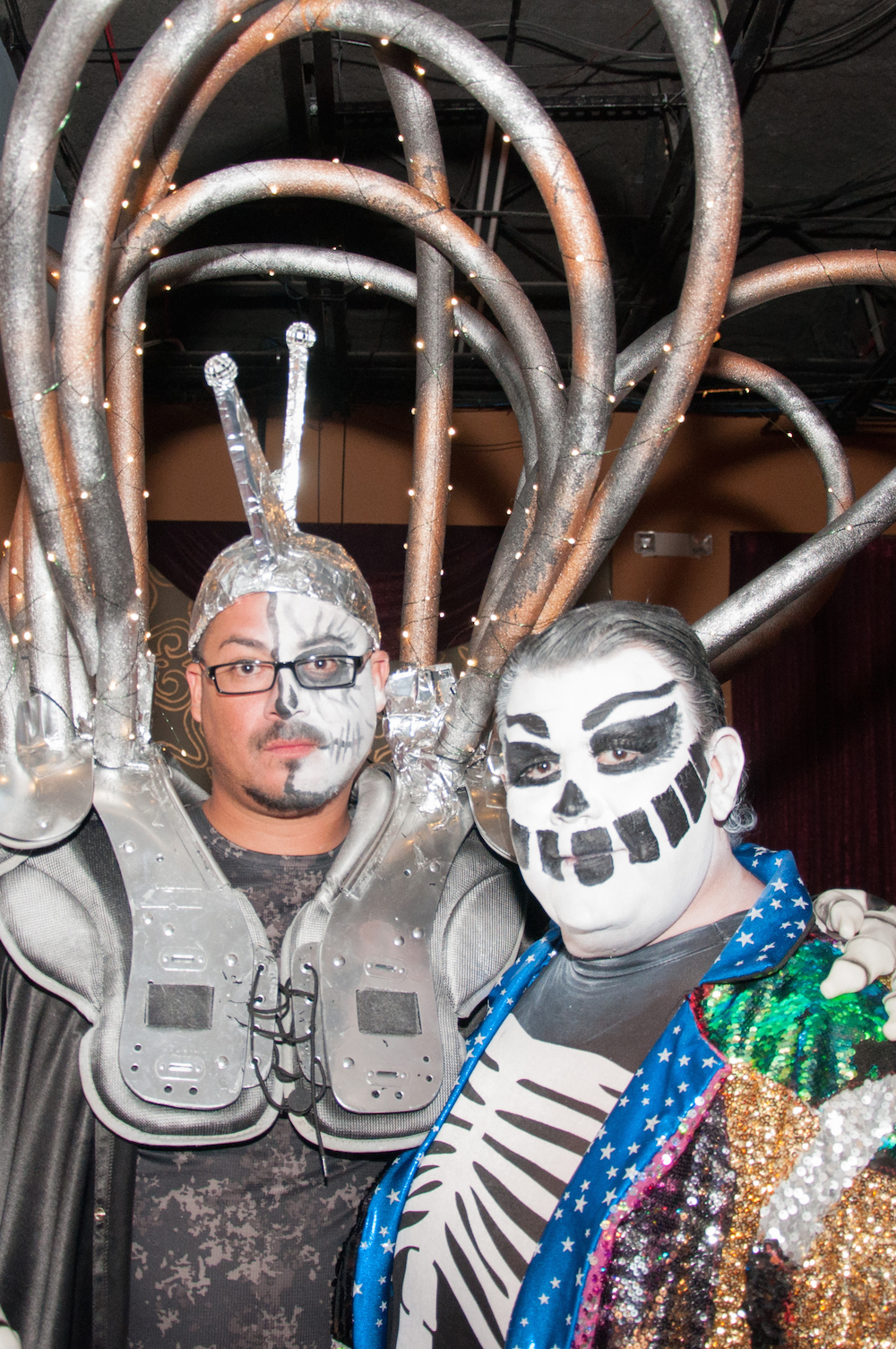 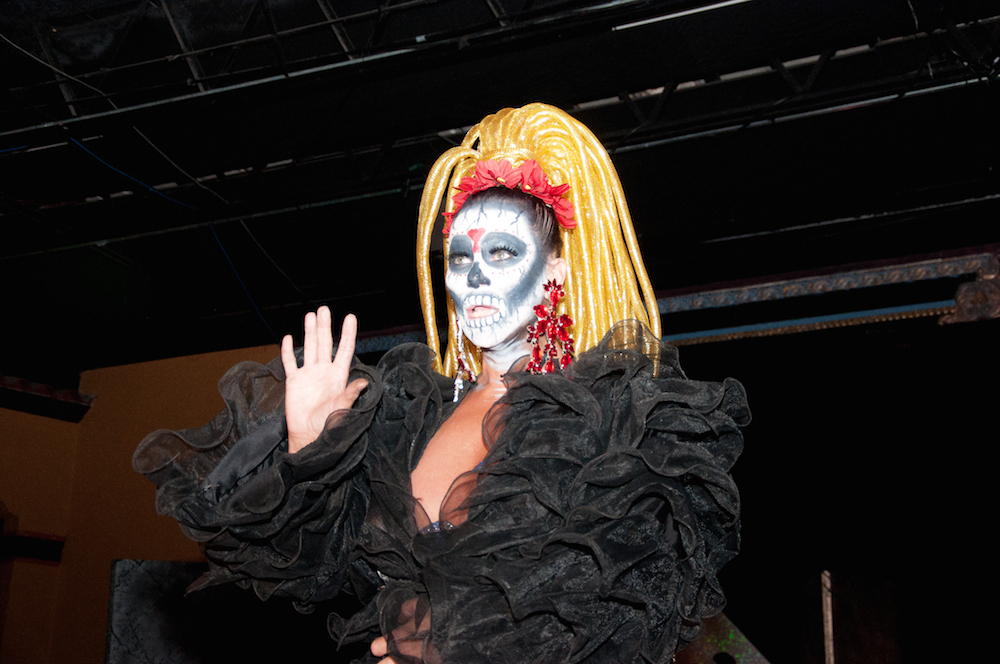 This year he performed on a recently replaced hip. Thanks to the Affordable Care Act (“God bless Obamacare!” he says) Rene as well as other members of his family are able to get much needed medical treatment. But as a small business owner, your income suffers when you are on bed rest. He was back on that hip 10 days after surgery, and dancing in heels to an almost-20 minute routine just months later. I hurt just thinking about it but he laughs when I wince and says, “I’m like a red oak, I just keep getting stronger.”

The pain is well worth it. Rene lists off all of the amazing people who have been associated with the ball over the past five years. His fellow performers consist of “drag queens, trans folk, and straight allies … and everyone is so talented!” Rene is also quick to share credit with the people who have been helping behind the scenes over the years. Maria Chavez makes brilliant costumes and tamales (and has been commissioned to do my wedding dress for next summer!). Tim Campion, a VP at GLI Distributing, supplies the beer, Abel Sanchez does amazing stage backdrops, Marie Ericsson and Ruben Lizalde have been covering graphics and music, and Rudy Lopez created the first two posters and programs. Rene’s mom, the amazing Irma Gonzalez, has been a huge part of the process from the very beginning, also having cooked for the crowd over the years.

Rene also credits so many of his audience members and contributors, community professionals who know how to have a good time, he says. The audience is full of state reps, judges, lawyers, doctors, and even a stray intimacy therapist or two (or as Rene would say … “you know, the common folk”) who enjoy the show each year. Rene says one of his biggest supporters is Leticia van de Puete, who recently threw her hat into the ring for San Antonio mayor.

There has also been some frustration with being a large and in charge (yep, that’s a big-girl joke; Rene doesn’t mind!) member of the arts community in San Antonio without getting a lot of press and recognition. After all, the more publicity the show gets, the bigger it gets … and the more people in the community he can serve. “I guess it took a lot of faith on my part to get an article published about the ball,” he laughs (and if you don’t catch the joke, check out the article byline).

A little faith, and a lot of talent. And a lot of belief in giving back.

Many readers may be surprised to hear that while Rene has supported the San Antonio AIDS Foundation and the Jump-Start Theatre over the years, his primary focus has been local area food banks and education scholarships.

The first year, he and fellow performer Lady Tiffany brought five truckloads of food to Sacred Heart Catholic Church through the show and the office of state representative Justin Rodriguez. This made all the performing in pain worth it. There was nothing but baby food in the pantry when they arrived. And watching a little 3-year-old boy hug a box of Cheerios to his chest will only make you work that much harder the next year. If Rene has anything to say about it, no one will go hungry on Thanksgiving in his town.

This was Rene’s second year at the Guadalupe Theatre, after three at the Jump-Start, and he will be back there next year. It feels comforting to be in the house of the virgin mother, he notes. The 2014 show sold out, with 500 people packed in the theatre. So far, he has donated $850 to the Mission Espada Church, $500 to St. Mary’s, $200 to the Metropolitan Community Church, and another $500 to the West Side Inner City Development.

Last year’s $1,000 student scholarship went to a Brackenridge High School graduate and was named after Erica Andrews, the first person who put Rene in drag and who passed away that year. This year’s scholarship is named after Shirley Temple, and will benefit another graduating senior with $1,000.

But churches? Many people have asked, what happens when a group of drag queens stock the food bank. Rene rolls his eyes “I did my baptism and first communion at Sacred Heart. I have always been a member of the church family.”

He continues, “I’m not sure about churches on the north and east side of town, but on the west and south side and central part of the city, the churches are very accepting of the LGBT community. I have never felt discriminated against when I go and worship in these churches. It’s the Republican politicians that poison the holy water by creating lies and scare tactics trying to separate us. But God loves all of us! And I will always use the talents He has given me to help any way I can.”

Rene notes that he grew up in this community as a fourth generation Texan and loves that he has been part of breathing life back into Dia de los Muertos by creating a fusion of tradition and fun. Parties with the same theme are popping up throughout the community, and it’s flattering.

But despite the lookalike shows, Rene will always be San Antonio’s original gangsta’ of Dia de los Muertos balls. Next year’s theme is Warriors Come Out To Play because, “That’s who I am…a warrior and a fighter.

“Hey, it’s community … gay, straight, everything in between.”

I, for one, am proud to have Rene on our side. Because God knows you don’t want to piss off the Gay Mafia.

On January 9, the plaintiffs in the Texas marriage equality lawsuit will head to New Orleans where the U.S. Court...