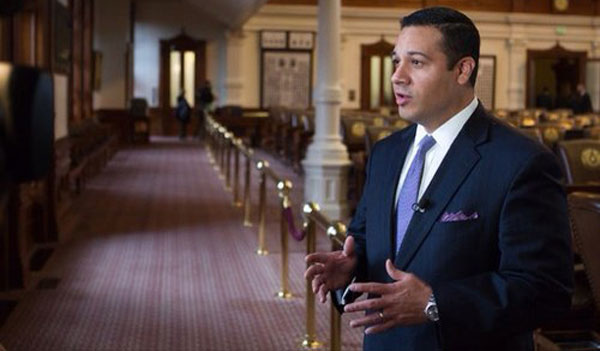 State Rep. Villalba says he has reconsidered filing a bill he authored which would have made it legal for businesses and organizations to deny services to LGBT Texas based on their religious beliefs. (Photo: Twitter)

State Rep. Jason Villalba (R-Dallas) announced on March 9 that he has “reconsidered” filing a bill he authored (HJR55) that proposed a state constitutional amendment to the Texas Religious Freedom Restoration Act (RFRA) which would have eroded the rights of LGBT Texans.

Villalba’s now defunct bill is similar to a bill (SJR10) submitted by state Sen. Donna Campbell (R-New Braunfels) that would bar the state and local municipalities from “enforcing laws that would burden an individual’s or religious organization’s freedom of religion or right to act or refuse to act in a manner motivated by a sincerely held religious belief unless the government proves that the burden is in furtherance of a compelling governmental interest and is the least restrictive means of furthering that interest.”

Last Sunday, the San Antonio Express- News published an editorial that denounced both bills saying, “It’s clear that the targets are predominantly Texas’ gay community, which some cities have correctly seen fit to protect with non-discrimination ordinances, San Antonio among them. But the harm would not be limited to this group in any broad reading of these proposed constitutional amendments . . .”

According to a statement by Equality Texas, “For 15 years the state RFRA has worked well to protect religious freedom for all Texans. HJR 55 would lead to abuse of the law, allow people to use religion as an excuse to harm others, undermine the fundamental principle that laws should apply to everyone equally, and result in harm to Texas businesses and the Texas brand.”

It appears that Texas business leaders may have pressured Villalba into taking back his bill.

Bill Hammond, CEO of the Texas Association of Business, said Villabla was doing the right thing. “Representative Villalba has always been a strong supporter of and thoughtful advocate for Texas businesses. We need more of his brand of common-sense conservatism in the Texas Legislature,” Hammond said in a statement. “The Texas Association of Business is grateful for Villalba’s careful re-consideration of HJR 55 and we look forward to working with him to ensure that Texas businesses and jobs are protected.”

In response to Villalba’s announcement, Terri Burke, executive director of the American Civil Liberties Union of Texas said, “We congratulate Rep. Villalba in reconsidering his proposed state constitutional amendment, HJR55, which would allow anyone, including business owners and public officials, to use their personal religious beliefs to discriminate.”

GLAAD TO KNOW YOU at the Overtime Theatre