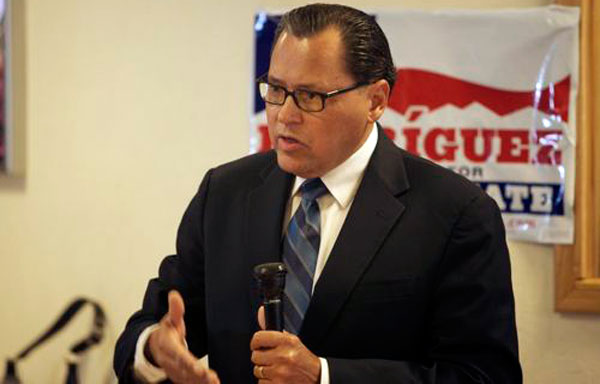 On March 2, Texas Independence Day, five Democratic state senators introduced Senate Bill 856 that would prohibit discrimination in the areas of employment, public accommodation, housing, and state contracting based upon sexual orientation, or gender identity or expression.

In announcing the bill, Equality Texas said in a press release, “Senator Rodríguez is filing this legislation so that all Texans—including those who are lesbian, gay, bisexual, or transgender—can live out their independence in our great state without fear that they will be denied employment, housing, or access to public spaces or state contracts because of who they are or whom they love.”

“I chose today—Texas Independence Day—to file this important legislation,” Senator Rodriguez said in a statement, “because Texas values—such as hard work, opportunity, and the Golden Rule—are the reason why Texas remains strong 179 years later. That is why we must act definitively to ensure everyone in the Lone Star State is treated fairly and equally.”

The bill’s co-authors each issued a statement as well.

“Every Texan deserves to be treated fairly, and this legislation will make our state stronger by protecting this important ideal,” Senator Watson said.

“Discrimination of any form has no place in Texas. Not in our schools, our government, or our services. I am proud to co-author this legislation and proud to stand strong for the fair treatment of all Texans especially our friends in the LGBT community who for too long have been the target of discrimination,” stated Senator John Whitmire, Dean of the Texas Senate.

“I’m proud to coauthor legislation to prevent fellow Texans from being discriminated against due to who they love, ” said Senator Ellis. “All hardworking Texans, including our LGBT neighbors, should have the chance to earn a living, provide for their families, and live like everyone else without fear of getting fired or evicted solely because of who they are. ”

“All Texans should enjoy equal protection under the law. This important legislation would ensure that our LGBT brothers and sisters can express who they are without fear of discrimination. It would also send a message to the rest of the world that Texas welcomes anyone that wants to contribute to our great state, regardless of sexual orientation,” said Senator Garcia.

The new bill would provide protections that are available now in only a few of Texas’ largest cities. According to Equality Texas, it is estimated that 35.5 percent of Texans live in a city where discrimination against sexual orientation is prohibited. 33.9 percent live in a city where gender identity is protected.

“Equality Texas applauds Senator Rodríguez and his four co-authors for the filing of the omnibus non-discrimination bill SB 856. Every Texan deserves to be treated fairly and equally, including gay and transgender Texans,” said Chuck Smith, Equality Texas’ executive director . “This legislation would help ensure that every Texan has the opportunity to work hard, earn a living, and provide for their families in the great state we proudly call home.”

I love "queer." I see "queer" as meaning that which deviates from the script. Political resistance is "queer." You live...