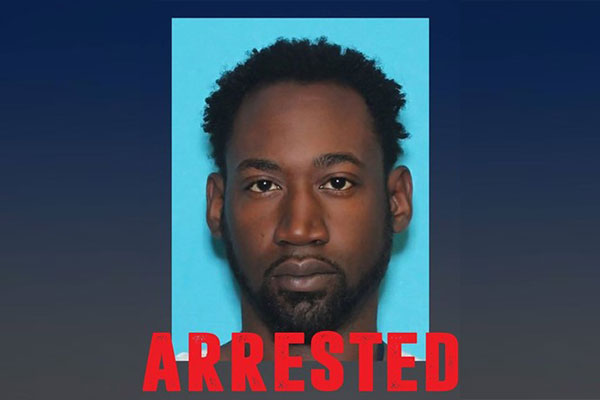 Police have identified this man as Otis Tyrone McKane, who they say gunned down a veteran SAPD detective in broad daylight Sunday.

San Antonio police have arrested a suspected cop killer less than 48 hours after a detective was gunned down in broad daylight outside the city’s police headquarters.

Earlier in the day, police had released video showing a man who they now say is McKane entering the San Antonio Police Department’s downtown headquarters early Sunday morning before quickly walking back out. Police say McKane pulled up behind Marconi at around noon Sunday while the detective was conducting a routine traffic stop near SAPD’s headquarters on Santa Rosa. According to police, McKane walked up to the drivers side window of Marconi’s vehicle and shot the 20-year SAPD veteran twice in the head.

McManus said police surveilled the suspect for roughly three hours before a SWAT team pulled him over on the city’s far east side. He said McKane was a passenger in the car, a woman was driving, and that there was also a child in the vehicle when the McKane was arrested without incident. McManus added that McKane has “a history with the department.”

McManus told reporters that the overriding sentiment among area law enforcement Monday afternoon, following a 30-hour manhunt by local, state and federal police, is one of relief. “A lot of relief,” he said. “I don’t think anyone slept last night, and I think everyone’s looking forward to a good night sleep tonight.”

In her remarks at the press conference, Mayor Ivy Taylor said the city can “breathe a little easier knowing that the suspect who maliciously killed one of our SAPD officers is in custody.” Bexar County District Attorney Nico LaHood wouldn’t comment on whether his office plans on pursuing the death penalty, saying they’ll make that decision once police finish their investigation.

McManus said the motive behind Marconi’s slaying is still unknown.