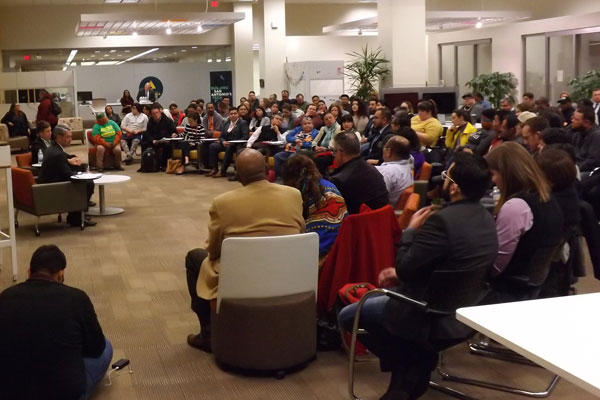 (All photos by Sam Sanchez)

Approximately 150 people packed into a meeting room at the Central Library for a Town Hall hosted by Mayor Ron Nirenberg and his LGBTQ Advisory Committee. During the gathering, the mayor answered questions on a variety of topics, from affordable housing to education, historic preservation, HIV issues, the advantages of Pre-K and LGBTQ homelessness.

Even though the meeting was sponsored by the Mayor’s LGBTQ Advisory Committee, the only people on the dais were the mayor and Zan Gibbs, equity manager for the city’s Office of Equity, who served as moderator. Members of the committee sat in the audience and were introduced by the mayor at the start of the meeting.

Before the formal proceedings, Mayor Nirenberg said he wanted to “brag a little on our city” noting that this year, San Antonio scored 100 on the Human Rights Campaign’s Municipal Equality Index. 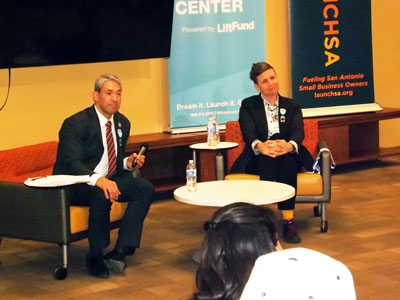 The agenda of the town hall was mostly unstructured. Members of the audience were given the opportunity to ask questions. In many cases, the queries had to do with services and policies that were already in place with both the mayor and Gibbs offering replies and referrals.

One question the mayor did not answer had to do with city-wide employment nondiscrimination, a component missing from the city’s NDO which was passed in 2013. LGBTQ city employees and LGBTQ employees of city contractors are covered but elsewhere in the city, private businesses can still fire employees for being LGBTQ.

When the question was posed, Mayor Nirenberg seemed unprepared replying, “City-wide employment nondiscrimination? That is something that has not come across my desk. Zan can you speak to that?”

Gibbs replied, “[The NDO] does not include private business employment right now. The committee has talked about it a little bit. It’s a little bit unclear if it’s a lift that they would want to take on. It would require a large shift in the current ordinance. So, it’s probably not something we’ll see soon but I think it’s a great opportunity for everyone to say maybe this is a priority or maybe something else is a priority. You know, this is a great place to take notes about what you’re bringing up to the table and want the committee to look at further, because you’re right [the NDO] does not have protections for private businesses.” 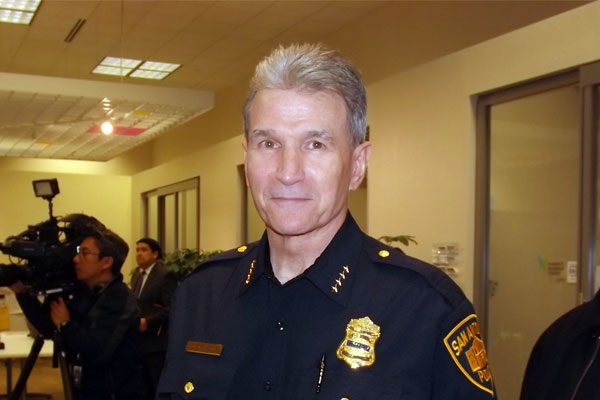 Also in attendance was Police Chief William McManus who stood in the back of the meeting room until questions about how local law enforcement interacts with the LGBTQ community were posed. At that point, he came up to the front and answered several questions.

Chief McManus even garnered a bit of praise when former City Councilwoman Elena Guajardo stood up to remind the audience that McManus was the first SAPD chief to initiate LGBTQ sensitivity training for police cadets.

Nirenberg is extremely popular with the city’s LGBTQ community as evidenced by the crush of people who gathered around him after the meeting to take pictures. Earlier this week, a community-based group of LGBTQ voters held their first meeting of the newly-formed Rainbow Coalition to Re-elect Mayor Ron Nirenberg.

One Advisory Committee member told Out In SA the purpose of the town hall was to give the LGBTQ community access to the mayor, adding that other groups in the city hold similar gatherings. This meeting was meant to be the first with more to follow in the future.

Originally published in the San Antonio Current. Lee Haines, the Bonham Exchange's general manager, wants patrons to know it will...