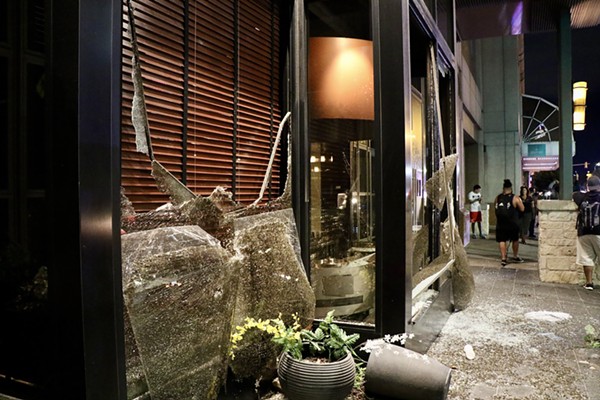 The San Antonio LGBT Chamber of Commerce issued a statement on June 1 condemning the violence and vandalism that broke out during an anti-police brutality protest in downtown San Antonio on May 30.

The protest was in reaction to the killing of George Floyd, a black man in Minneapolis who died after a local policeman, who during an arrest, kneeled on Floyd’s neck until he passed out and died. There have been numerous protests across the nation. In many cases those peaceful protests have devolved into riots marked by violence and property damage. 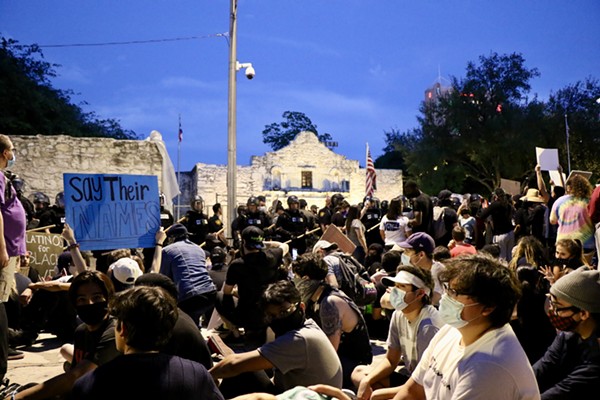 Anti-police brutality protestors sit down in front of the Alamo as armed TITFF members and police stand in the background. (Photo: James Dobbins)

According to reporting by James Dobbins in the San Antonio Current, the local protest began with peaceful group who assembled in Travis Park and marched to Alamo Plaza where they encountered members of This Is Texas Freedom Force, a right wing group who stood heavily armed in front of the Alamo and the Cenotaph. Members of the group traded insults with the protestors.

Dobbins writes that “the scene dissolved into insults, death threats and punches.” From that point protestors splintered off with some departing and others engaging with police who fired pepper balls.

“I witnessed young men smashing windows, damaging cars, tipping over and breaking flowerpots. Angry, armed cops advanced. The potential for deadly confrontation was thick in the air,” Dobbins reports. “. . . for all the property damage that night, San Antonio avoided a far more painful outcome. Lives could easily have been lost.”

The events of Saturday night have weighed heavily on local citizens who are unaccustomed to such violence on the streets of San Antonio. It is with these sentiments in mind that the board of directors of the LGBT Chamber issued the following statement.

We, the San Antonio LGBT Chamber of Commerce, are deeply saddened by all the events that have happened over the weekend in San Antonio and throughout the country. We mourn the loss of George Floyd, who was a close friend of former Spurs, Stephen Jackson, with his family and friends.

Ironically, as we approach the first week of Pride Month, we remember the historical Stonewall riots 51 years ago. One would hope that we no longer lived under the same circumstances. Yet, we find ourselves ending the month of May 2020 with riots and violence because of discrimination and inequities where we fight for not only LGBTQ plus rights and equality, but for all people.

We condemn the senseless acts of violence and killings especially towards the African American Community, all communities of color, and LGBTQ people. Ahmaud Arbrey, Breonna Taylor, and other victims of racial violence; names we have heard and those we have not. All lives matter!

The LGBTQ plus people know what it is like to be condemned and racially discriminated against first hand and this is why we will continue to stand in support of our African American, all communities of color, and LGBTQ plus and ally owned businesses.

Use this link to view a slideshow of James Dobbins’ photos of the May 30 protest in San Antonio.

This commentary was originally published in the San Antonio Express-News. It is being republished here with the permission of the...