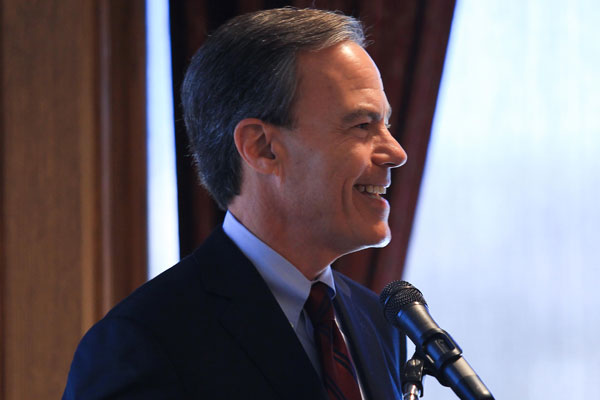 Texas House Speaker Joe Straus says that a transgender bathroom bill “. . . isn’t the most urgent concern of mine . . . I know the lieutenant governor is very enthusiastic about this idea. Let him run with it. We’ll see what the House wants to do.”

Straus, a Republican who represents San Antonio’s District 121, made the statement at a Texas Tribune event on Tuesday.

Straus’ comments are in direct opposition to statements made by Lt. Governor Dan Patrick who has said he plans to propose a bill like the one passed in North Carolina that bars transgender people from using the bathroom that matches their gender identity.

“I don’t know what the bill is. I don’t know what’s going to be in it,” Straus told the Texas Tribune. “Let’s look at the details, but if it creates a situation as North Carolina went through my enthusiasm level would not be high for that.”

Strauss is referring to the NCAA’s policy that requires cities which host championship tournaments to explain how they would provide an environment that is safe and free from discrimination. In September, the NCAA yanked seven championship games from North Carolina in protest of laws targeting the transgender community.

If the Texas Legislature passes a bathroom bill it could risk the City of San Antonio losing the NCAA Final Four basketball tournament which it is scheduled to host in 2018.

Patrick has been critical of the NCAA’s decision saying in a statement this summer, “The NCAA is attempting to be politically correct. This issue has nothing to do with discrimination. What about a woman’s right to privacy and security in a ladies’ bathroom, locker room or shower? What about male sexual predators — the ones who use the internet to go after children — who will use such policies as a means to enter a women’s dressing room, as we have seen.”

Additionally, Patrick has opposed the Obama administration’s guidance urging schools to respect trans students’ identities. “I will be sending a letter to every superintendent in the state of Texas letting them know that they should not move forward on the President’s guidelines,” Patrick said in June.

In September, the Texas Association of Business came out against “bathroom bills” opposing any “legislation that is seen as discriminatory and would impact workforce recruitment and/or cause a negative economic impact on the state,” according to the group’s president, Chris Wallace.

On Dec 22, the Paper Tiger will play host to the third installment of Queers and Beers, “a big gay...