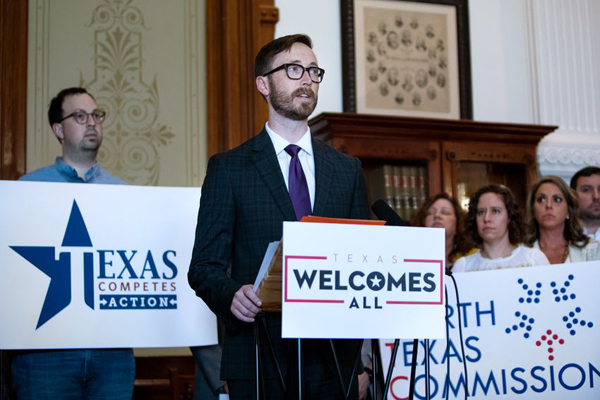 Dave Edmonson, Executive Director of Texas and the Southeast region for TechNet, speaks against discriminatory legislation during a press conference on March 27, 2019. (Photo: Emree Weaver / The Texas Tribune)

The bill passed on a 19–12 vote, with one Republican voting against it and one Democrat voting for it. It requires one more approval in the Senate before it heads to the Texas House.

After emotional testimony, a forceful show of opposition from leaders in the state’s business community and more than an hour of floor debate, the Texas Senate on Tuesday gave preliminary approval to a sweeping religious refusals bill, a priority proposal for Lt. Gov. Dan Patrick that LGTBQ advocates have called a “license to discriminate.”

The measure, Lubbock Republican Charles Perry’s Senate Bill 17, would allow occupational license holders like social workers or lawyers to cite “sincerely held religious beliefs” when their licenses are at risk due to professional behavior or speech. It would also prevent licensing boards from enacting regulations that burden “an applicant’s or license holder’s free exercise of religion.” The bill does not protect police officers, first responders or doctors who refuse to provide life-saving care.

After a heated debate, the measure passed on a 19–12 initial vote, with one Democrat, Sen. Eddie Lucio, voting for it, and one Republican, Sen. Kel Seliger, voting against. It requires one more vote in the Senate before it can be sent to the Texas House for debate.

Perry said the bill provides a defense for licensed professionals who find themselves before credentialing boards based on conduct or speech motivated by their “sincerely held religious beliefs” — a pre-emptive protection for religious employees at a time when, he claimed, religion is under attack.

But LGBTQ advocates and Democrats have criticized the bill as an attempt to give cover to those who would deny critical services to members of the LGBTQ community. Last week, leaders from major businesses like Amazon, Facebook and Google, as well as tourism officials from some of the state’s biggest cities, came out in force against the bill. Discriminating against LGBTQ communities is bad for business, they said.

Patrick, who has tagged Perry’s bill as one of his top 30 legislative priorities, defended it in the face of the business community’s criticism.

“Senate Bill 17 will ensure that anyone can practice their profession in Texas without being forced to compromise their religious faith,” Patrick spokesman Alejandro Garcia said last week.

Equality Texas, an advocacy group, called the bill this session’s “number one threat to the LGBTQ community.”

“Dan Patrick has doubled down on his attack on the LGBTQ community, moving out of bathrooms and into every single licensed profession in Texas,” said Samantha Smoot, the organization’s interim executive director. “SB 17 would create a religious litmus test, and open the doors to discrimination and to real harm to LGBTQ Texans. Dan Patrick has launched a whole new war against LGBTQ people.”

During a lengthy floor debate, six Democrats and one Republican echoed those concerns.

And Sen. Royce West, D-Dallas, pointed to history, when “the practice of faith has been tied to a lot of hideous practices” — like prohibiting interracial marriages.

“The reality is that a lot of people have done things that were not consistent with being a Christian” while claiming religious motivation, West said.

Perry insisted that “this bill does nothing to promote any illegal or discriminatory activity.”

“It’s not licensing discrimination at any level,” he said later in the debate.

In what he characterized as an effort to codify that, Sen. José Menéndez, a San Antonio Democrat, proposed an amendment to the bill that would explicitly prohibit professionals from refusing service based on gender identity or sexual orientation. Perry put it to a vote; the amendment failed 12–19.

“You know that saying, ‘You can put lipstick on a pig?’” asked Sen. Borris Miles, D-Houston. “Sen. Perry, this is a discrimination bill.”

When it came time to vote, Miles’ answer was clear: “No!” he shouted from the back of the chamber.

Disclosure: Amazon Web Services, Equality Texas, Facebook and Google have been financial supporters of The Texas Tribune, a nonprofit, nonpartisan news organization that is funded in part by donations from members, foundations and corporate sponsors. Financial supporters play no role in the Tribune’s journalism. Find a complete list of them here.

Daniel Hinojos: On Struggling to Come Out as Gay and Finding His Calling in Fashion

Originally published in Profiles in Pride. From a young age, Daniel Hinojos knew he was attracted to boys. But being...