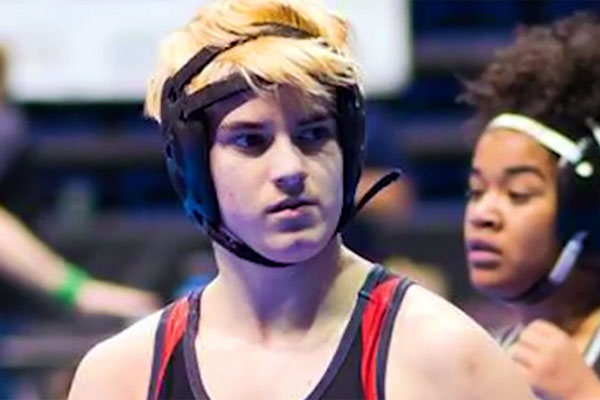 Mack Beggs, an 18-year-old trans boy on the wrestling team at Trinity High School in Euless, Texas has completed the voice-over for a YouTube video which pushes back on the anti-trans bathroom bills being debated during the state legislature’s Special Legislative Session.

The video was produced by Athlete Ally, “a nonprofit organization that provides public awareness campaigns, educational programming and tools and resources to foster inclusive sports communities.”

“Transgender athletes are not cheating. They’re not choosing. We belong,” Beggs says in the video. “Transgender people are not to be feared.  We deserve the same rights and protections as everyone else . . . If you’re a legislator thinking of passing a bill that denies who we are and makes people fear us, stop. We exist and so do our rights.” Beggs has faced his share of push back as a trans athlete.

Last May during the regular legislative session, Senate Bill 2095 would have allowed the University Interscholastic League to disqualify student athletes on steroids, including trans boys taking testosterone for gender dysphoria. The bill received preliminary approval but was left pending in committee.

During the last school term, Beggs racked up an undefeated season and won the UIL regional title in his bouts against girls, prompting his opponents to say he had an unfair advantage because he is taking testosterone. Beggs feels he should be able to compete with boys but the rules don’t permit that option.

In championing Beggs’ cause, Equality Texas says the state should “should look to other states like Utah, Florida, and Colorado, and the many sport governing bodies that make accommodations for transgender teens going through medical transition to bring its policy into alignment with science.”

In July, Beggs was one of the Grand Marshals of Pride San Antonio’s Pride Bigger Than Texas Parade.

“We’re honored to have partnered with Mack Beggs to speak out about the discriminatory debate unfolding in Texas related to transgender inclusion and equality,” Athlete Ally executive director Hudson Taylor said in a statement about the release of the video. “Transgender Texans deserve equal respect and protection both in sport and under the law, and Athlete Ally is proud be mobilizing the athletic community to stand up and speak out for LGBT equality at such a critical moment.”

Meet the owner of a gay bar who is challenging Texas Gov. Abbott