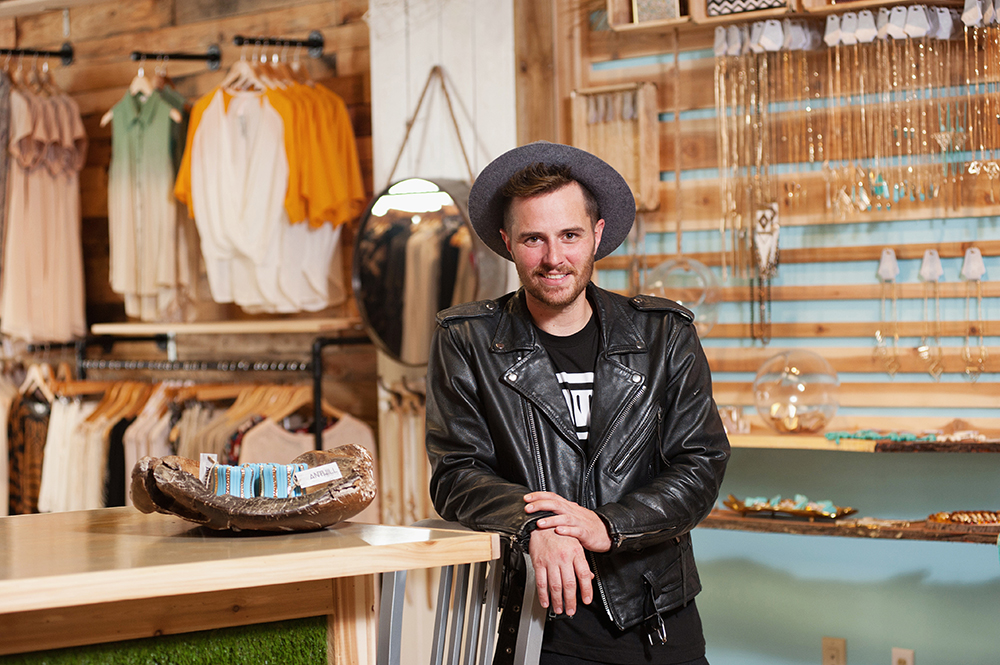 “Fashion is how you put it together.”

Anthony Ryan Auld has made a name for himself in the world of fashion through his appearances on Project Runway Season 9 and Project Runway All Stars Season 2. Auld, who has lived in Baton Rouge for several years, recently made the move to San Antonio. In April, the former reality-show contestant opened a new “lifestyle” concept boutique called the Anthill.

The Stone Oak boutique specializes in women’s clothing, art, and home décor. Everything in the store is “curated” by Auld. He plans to sell clothing by local designers, past Project Runway designers, and even some of his own designs. The shop will also be available to host special events such as bachelorette parties and other gatherings. “It’s a culmination of everything that I love,” Auld says.

The Anthill stands apart from other nearby shops. Auld plans to offer one-on-one consultation on how to dress for your body type both in-store and off-site. He said he saw a need for this type of business after doing research in the area.

“Customers come in because they know they are going to get a full-on look and take away a little bit of knowledge.”

“There’s really nothing like what I’m bringing to the table,” he says. “Yes, there are women’s boutiques, but what I’m trying to bring to the community is a little bit of my experience throughout the U.S., whether that’s a little bit of New York or L.A. I’m kind of bringing a higher sense of fashion in a boutique-type setting. I’ve always been very proud of the fact that I’ve done this since I was 16 years old; I’ve been in either retail or fashion. Customers come in because they know they are going to get a full-on look and take away a little bit of knowledge.”

But don’t expect to break the pocket book at the Anthill. Auld’s vision for the boutique is more than just name brands and high-price-tag items.

“I was always that kid in college who shopped at thrift stores, so everything in the store at this moment is under $125,” Auld says. “I have always been a firm believer that fashion is what you make it. So, if you can go to the thrift store and pair it with a Marc Jacobs bag and throw on some Michael Kors shoes, and you’re mixing that vintage with label–I’m all about that because that’s what fashion is. Fashion is not going to Neiman Marcus or Saks Fifth Avenue just because it’s got the label on it. Fashion is how you put it together, and that’s kind of what I’m doing.”

The biggest challenge so far? Getting the word out. Auld sees word of mouth as the most valuable form of exposure.

Future plans include expanding into men’s fashions. There is already talk of opening a second location in San Antonio or Houston.

“I had to shut off my emotions. The only emotion was anger.” Erika Land’s memories of her deployment at a...