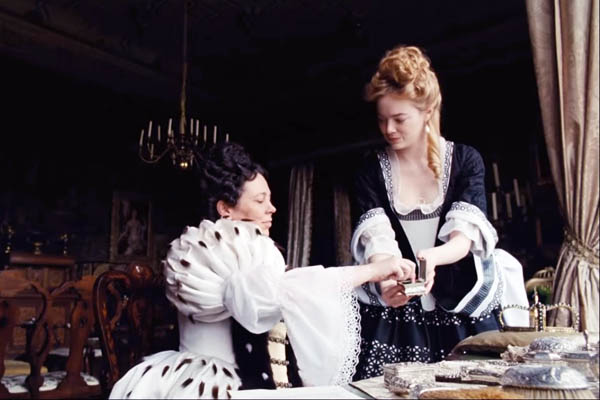 It matters little that the “prime minister” isn’t really prime minister – that title was first used officially after the events of the film – or that the actor playing the opposition leader is too young (and bad) for the part. For The Favourite is a triumph of aesthetics, not narrative.

Filmed mostly at Hatfield House, a 17th-century country estate north of London, The Favourite depicts the courtly world of Queen Anne (Olivia Colman), the gout-suffering, childless monarch who reigned from 1702 to 1714. Americans might know her only by the lacy weed named for her, but her years on the throne were actually quite remarkable, remembered for the creation of Great Britain by uniting England and Scotland, the rise of two-party politics, and a resolution to the War of Spanish Succession. But Lanthimos instead presents the other side of Anne: an insecure, ill woman easily swayed by the opinions of her best friend, Sarah Churchill, the Duchess of Marlborough (Rachel Weisz). (Sarah’s husband led English troops to victory in the aforementioned war, earning him and his wife Blenheim Palace, which still stands as a UNESCO World Heritage site.)

Into this romantic friendship – history neither proves nor disproves the sexual involvement – steps Abigail Hill (Emma Stone), a cousin of Sarah’s who has fallen on hard times. Reduced to servant status, she slowly connives her way into the royal bedroom, becoming the monarch’s “favourite” or closest companion. The ensuing jockeying for privilege, influence and queenly affection between Sarah and Abigail becomes the film’s meat and potatoes, and mead.

But this is a Lanthimos movie, and The Favourite isn’t content to be a straightforward historical re-creation. Instead, it’s filled with humor, sensuality, stylistic and verbal anachronisms, and askew observations about the nature of feminism and power. It never embraces surreality or absurdism on the scale of The Lobster or The Killing of a Sacred Deer, but it uses other devices to hold your attention: eye-popping cinematography (complete with fisheye lenses), old-fashioned dissolve shots, sets pretty enough to eat and a score that often eschews melody for percussive bursts of sound.

But the film is also peppered with pretentious chapter titles that fail to disguise the fact that the story just isn’t that emotionally involving, despite good performances by Stone and Weisz, and a superbly manic one by Colman. Indeed, if you were to snuff out the candles and strip off the costumes, the movie would become plodding, even tedious – an oddly unfulfilling amalgamation of Stanley Kubrick, Wes Anderson and Luis Buñuel. Yet despite those faults and the decision by writers Deborah Davis and Tony McNamara to excise Anne’s husband and instead focus on the female character triangle, Lanthimos’ production is one of the most beautiful and intriguing of the year – though it’s unlikely to be your favorite.