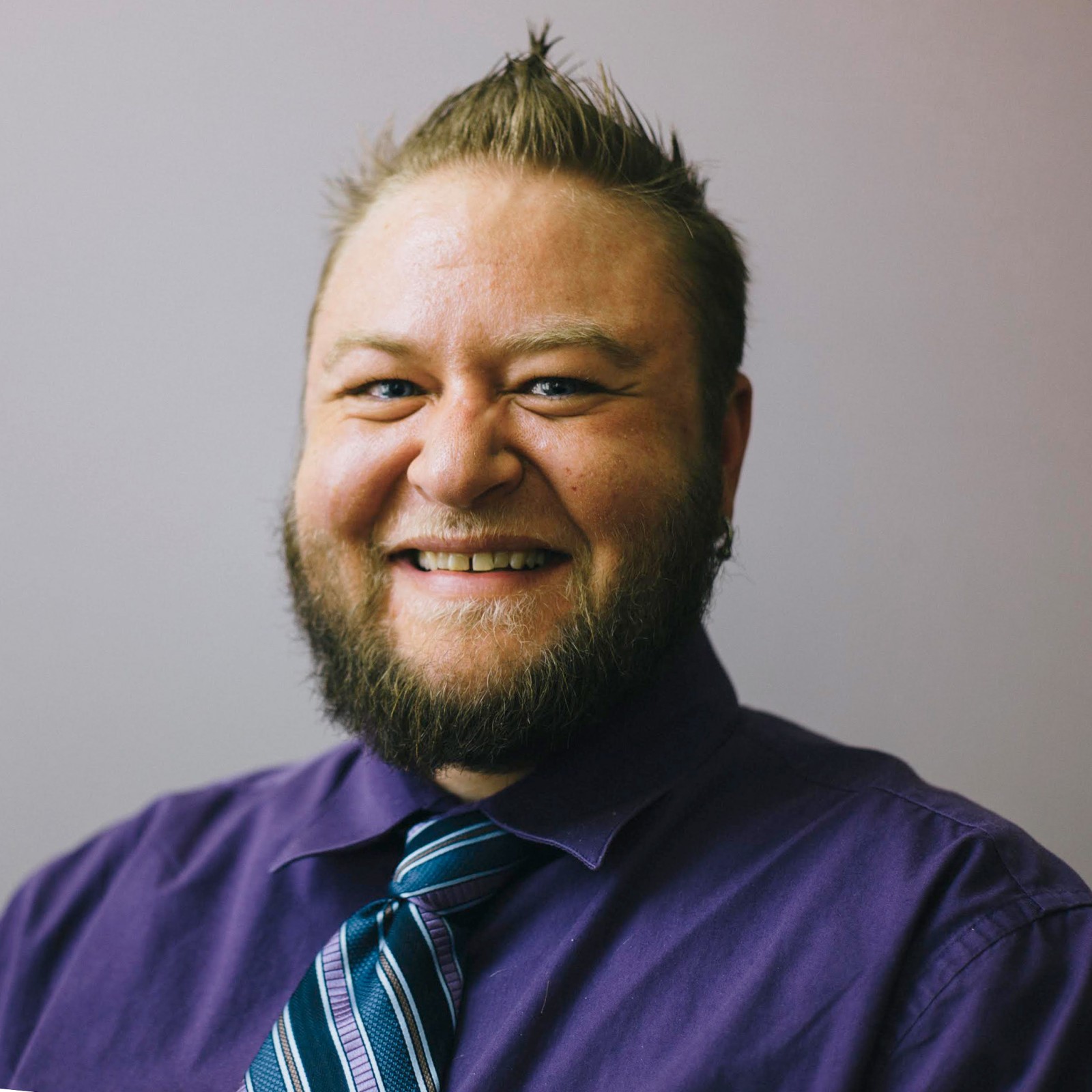 When his kindergarten teacher asked the students to line up by gender, Brandon L. Beck was confused. Did he belong in the line for boys or girls? He was assigned female at birth, but preferred acting like the boys, despite the ridicule. It was the late 1970s, and very little was known about being transgender.

Fortunately, Beck’s supportive parents let him be what he calls “gender creative.” Growing up, he was the only girl on the boys’ baseball team and the only female in the martial arts studio. While he knew he was different, Beck wasn’t familiar with the concept of being non-binary or transgender until his early 30s. “As soon as I met a trans man, I knew exactly what that meant to me, and I started my transition then,” he says. He was around 31. He’s now 39, living in San Marcos with his wife Marcia.

As Beck developed expertise on transgender issues and interest in social justice, he was constantly asked to speak to other classes, schools and organizations. Through this side work, Beck found a passion for teaching outside the classroom, so he obtained a PhD in adult, professional and community education from Texas State.

Delving into community work while holding down his day job, Beck’s bandwidth was running thin. “I wanted to give my best to what mattered most to me, so I gave up the elementary education professorship to pursue the community education path,” he says. Starting this spring, he’ll begin working full-time as an independent community educator.

Despite his community work being a part-time job thus far, Beck has left a major footprint across Texas by advocating for trans people at schools, places of worship, workplaces and hospitals.

One of his proudest moments involved working with a corporation in Austin that wanted to better support transitioning employees. Beck educated them on the needs of their trans workers and helped them build a strong workplace ally program.

Beck also loved speaking to Austin middle school students in an Advancement Via Individual Determination class, a college readiness program. “The teacher wanted his students to know more about trans students in his own school so they could use the leadership skills they were learning in the AVID program to be social justice advocates for their classmates,” Beck explains. He spoke about what it’s like to struggle with gender identity in middle school and how cis students can be allies for trans students.

Other accomplishments include speaking to current and future doctors at Texas A&M College of Medicine and UT Health Science Center about transgender healthcare needs. He’s also proud to have helped the San Marcos Unitarian Universalist Fellowship obtain accreditation as a welcoming fellowship; he was part of a group of trans people that educated the church on transgender needs and issues.

Beck himself is a Christian, and one of his personal missions is building bridges between the LGBT and Christian communities. “Part of my story is that I am Christian and queer and trans. Part of what I do is help people see that it’s possible to be both,” he says.

“I understand there are some extremists in each community, but I really work to build the love that I think both communities represent,” he says. Beck also recently became involved with the annual Austin Pride Interfaith Celebration, which brings together people of all faiths, including atheists, during Pride week.

While Beck is paid for speeches and professional development work, he volunteers in an astonishing number of ways, and has received awards for his impactful work. He’s chair of the board for Transgender Education Network of Texas, vice president of PFLAG San Marcos, a board member for GLSEN-Austin, and a community advisor to Transcend at Texas State. He’s also a scholarship reader at two organizations and is applying to be a volunteer counselor at Camp Aranu’tiq, a summer camp for transgender youth and their families.

As if that wasn’t enough, Beck views a critical piece of his volunteer work as mentoring Texas trans youths and their families. He helps parents learn how to support their trans children and connects them with local resources. Under parental supervision, he mentors the youth. “A lot of times, these trans kids feel like they’re all alone, especially in the state of Texas,” he says. “I interact with the kids as a trans role model; they can see this is what a successful trans person looks like,” Beck says. If needed, he’ll speak to students’ principals, counselors and teachers to ease their transition at school.

Giving back to the community is a family affair: Beck’s wife speaks about being a supportive cis spouse, and his parents, John and Amy Beck, speak in the community about trans issues. Brandon Beck and his wife Marcia photographed by PM Lewis

Beck also advocates across the state for trans students facing discrimination at school. Since it’s often a legal issue, he works in partnership with ACLU advocates. Depending on the circumstances, Beck may write letters, speak to schools or work with families to support students who aren’t permitted to use the bathroom aligning with their gender identity.

“The safety concerns that we hear about restrooms are misinformed and misrepresented,” Beck says. “The people who are not safe in school restrooms are trans kids. If we normalize the idea that everyone goes to the restroom based on their gender identity and really step up the idea that attacks against trans people are hate crimes, and that bullying is a zero-tolerance issue in schools, then we protect everyone.”

How You Can Get Involved

The Transgender Education Network of Texas, which Beck volunteers with, has regional volunteers across the state. Beck credits Lauryn Farris, a volunteer for San Antonio, with teaching him how do community work well. He recommends locals learn about the organization (transtexas.org) and connect with Farris.

Beck also urges the LGBT community to be cognizant of proposed legislation affecting them, especially following the recent election. “We all need to be together looking at these bills, talking to our congressmen and senators, lobbying when it’s possible to get up to the Capitol, and sitting in their offices and talking to them about what matters to us as an LGBT community,” he says. “We need to make sure something like what happened in North Carolina doesn’t happen in Texas, because there’s a real potential for that to happen in this upcoming legislative session.” He recommends Equality Texas (equalitytexas.org) as a resource for information.

Through education, Beck hopes we can make the world safer and more just for trans people.

A local television broadcaster is sponsoring a town hall discussion about Senate Bill 6, also known as the bathroom bill,...