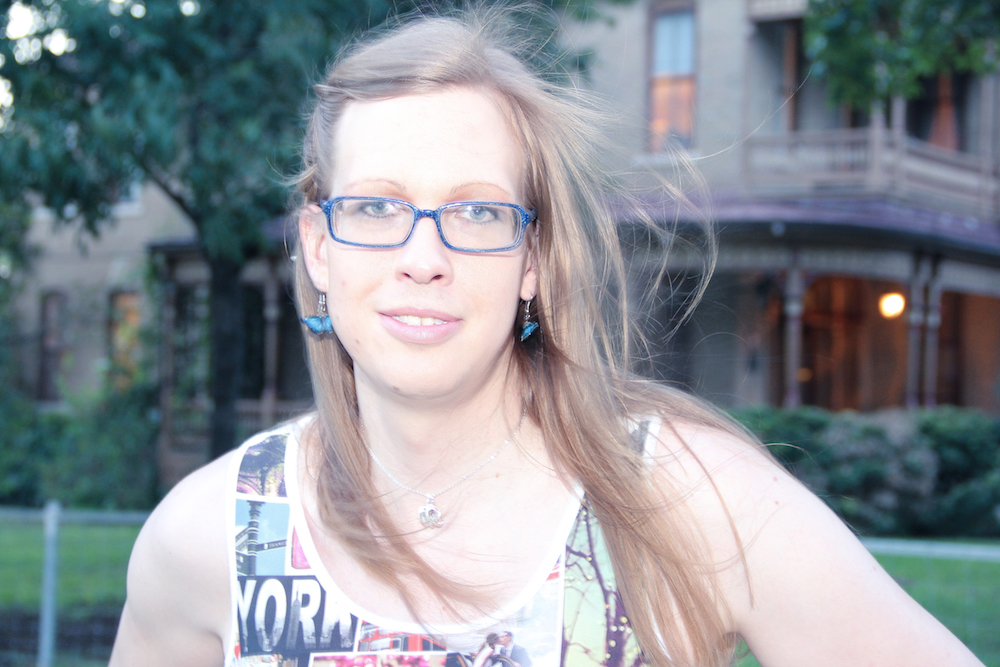 “I want to end the torture and abuse of all incarcerated transgender
people.”

A chief technology officer for a health-care consulting firm, Mikia Storm oversees the IT Department as part of her new life since she was released from federal prison and subsequent time in a San Antonio halfway house after a conviction for conspiracy to commit mail fraud.

Storm alleges that while she was in the federal prison system, she was subjected to continuous harassment, unfair treatment and, in one instance, rape because of her transgender status. She says harassment and unfair treatment also occurred at Crosspoint Inc. of San Antonio.

The suspects were accused of participating in “title washing,” in which they disguised the title history of salvaged vehicles that could only be used for parts or scrap metal in order to sell or trade them as regular cars.

“I took a job with someone who ended up taking car titles that were supposed to be mechanics’ liens,” the 35-year-old Alabama native explained. “I was the buyer/seller for these vehicles. My name was on the paperwork. I didn’t know [that what he was doing was illegal] until the end.”

“I see myself as having more of a genital dysphoria.”

On January 10, 2013, she began her three-year prison sentence with an additional three years of probation, first beginning at the Federal Correctional Institute Jesup in Georgia. After eight months, Storm was transferred to FCI Miami to serve out the remainder of her sentence. She then was placed at Crosspoint Inc. in San Antonio, which, among other services, provides a structured residential environment for individuals referred by the Federal Bureau of Prisons, the U.S. Probation Office, or U.S. Pretrial Services.

“None of my concerns were ever truly addressed,” Storm said of time spent in the federal prison system. “Concerns for my mental and physical well-being, and concerns with the Prison Rape Elimination Act. It states that as a transgender person I am supposed to be evaluated on a case-by-case basis whether I’m to be housed in a male or female facility, and it’s not to be based solely on status of genitalia. But the Federal Bureau of Prisons said it’s solely based on status of genitalia.”

According to the National Center for Transgender Equality (NCTE), being transgender or gender non-conforming in an American jail or prison often means daily humiliation, physical and sexual abuse, and fear of reprisals for using the available legal remedies to address underlying problems.

Many transgender prisoners are placed in solitary confinement for months or years just because of who they are, the NCTE states. In recent years, these issues have gained national attention. For example, regulations to implement the Prison Rape Elimination Act include specific provisions aimed at protecting transgender prisoners.

During a recent interview, Storm claimed staff at both prisons belittled her with rude comments and slurs by calling her “tranny.” “They would ignore proper pronoun usage,” she said. “They would call me ‘mister’ instead of ‘miss,’ but say it in a derogatory manner.”

Neither would staff honor her request to have a female correctional officer conduct body searches or strip searches, she added. Male inmates also taunted and harassed her, which came in the form of name-calling and inappropriate touching.

“Staff did nothing to stop it,” she said. “I would go to Psychology as well as to the person who oversaw compliance for PREA. I filed grievances against the Federal Bureau of Prisons all the way up to Washington. That was a year ago. I still have not received a response from Washington.”

“Second, it provides for a ‘knock and announce’ practice when an opposite gender staff member enters a housing unit and, more generally, provides that facilities are to implement policies and procedures that enable inmates to shower, perform bodily functions, and change clothing without nonmedical staff of the opposite gender viewing their breasts, buttocks, or genitalia, except in exigent circumstances or when such viewing is incidental to routine cell checks.

“Third, the standard also provides protection from intrusive searches for the purpose of determining gender for transgender or intersex inmates.”

It further states: “[Department of Justice] is aware that a prohibition on certain cross-gender searches and viewing will not solve the problem of sexual abuse in totality. DOJ is hopeful that adequate training of staff on conducting searches in a professional and respectful manner will decrease the likelihood of reports of sexual abuse due to an intrusive or improperly conducted search.”

As this story went to press, email requests for comment from FCI Jesup and FCI Miami regarding Storm’s allegations were not answered.

The harassment and verbal abuse culminated one night in sexual abuse, Storm said, when she was raped by her cellmate in Miami. “I didn’t say anything until he went to the [segregated housing unit],” she said. “Then I was afraid they were going to throw me into segregation as well. You fear retaliation from staff or from inmates if they feel you are the reason someone went to the SHU.”

Storm was released from Crosspoint on August 20, when her probation ended. She claims staff and residents made her life miserable during the six months she lived there. This included derogatory remarks by residents and staff’s refusal to use correct pronouns.

“I complained to [President and CEO Kevin Downey]. He said all my complaints were unfounded,” Storm said. “Therefore, for a little while, I got moved to the women’s house for a month. But apparently someone filed a complaint saying they were uncomfortable with me being there, so I was moved back to the men’s facility.”

Moreover, Storm claims that Joseph Shaffer, director of operations, told her she could not wear dresses or skirts while on the premises. “He said so I wouldn’t draw attention to myself,” she said.

In an email, Downey wrote: “First, I need to tell you that Crosspoint is not permitted to confirm or deny that any individual is here as the result of a FBOP referral nor can we disclose any information about said residents. Crosspoint is proud to have provided bias-free services to San Antonio citizens for over 50 years.

“This local, nonprofit organization does not and shall not discriminate on the basis of race, color, religion (creed), gender, gender identification, age, national origin (ancestry), disability, marital status, sexual orientation, or military status, in any of its activities or operations. These activities include, but are not limited to, hiring and firing of staff, selection of volunteers and vendors, and provision of client services. We are committed to providing an inclusive and welcoming environment for all members of our staff, clients, volunteers, subcontractors, vendors, and clients.”

Storm said she contacted Out In SA because of the injustice of the American judicial system regarding its treatment of transgender prisoners. She hopes her story will call attention to the problem and force the Federal Bureau of Prisons to implement policies to ensure that transgender inmates’ complaints are addressed, and that they are protected from possible retaliation for speaking out.

“I want to change the system and end the torture and abuse of all incarcerated transgender
people,” Storm said.

Now that she has completed her sentence and probation, Storm will relocate to Florida to continue working for the medical consulting firm at its headquarters. Aside from work, her goal is to start an organization to advocate for transgender prisoners, as well as transgender youth and those of the older population in the judicial system.

“I think trans prisoners should be placed where they feel most comfortable, male or female facility,” she said. “Not all [trans women] feel comfortable being placed in a male facility.” Storm believes placing transgender women  in male facilities can have a negative impact emotionally, mentally and socially.

“One of [the Federal Bureau of Prisons’] solutions was to put me in lockup or segregation, so I could be protected,” she said. “But I’m not able to move forward in reestablishing myself in the community as a productive citizen by being isolated like that.”

As for being labeled transgender, Storm doesn’t see herself that way.

Mayor Ivy Taylor lost the support of SA’s gay community in 2013 when, as a councilmember representing District 2, she...