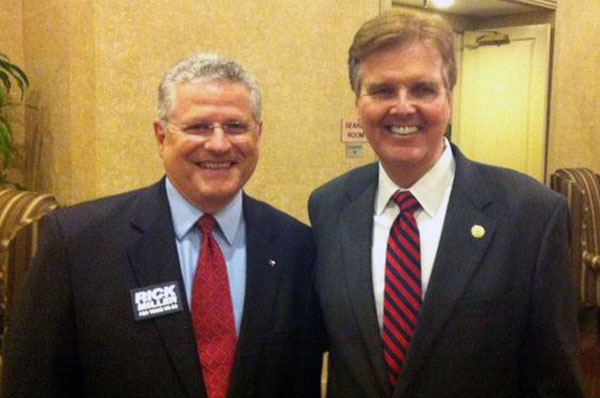 I’m writing to express my very serious concern about your proposed bill (HB 1556) undoing LGBT protections that have passed in cities with a combined population of more than 7.5 million, including Austin, Dallas, El Paso, Fort Worth, Houston, Plano and San Antonio.

When I read of your gay son Beau’s very moving response to your not quite understandable action I was motivated to write you. I am a fifth generation Texan – in one county alone! We are ranchers. I’m also a published author, recently inducted into the Texas Institute of Letters, a Board member of the Texas Historical Foundation as well as Board Member of the Greater Edwards Aquifer Authority. I am a proud Texan and I love my state just as you do.

I’m also a GAY, tax paying citizen. I pay taxes in FIVE Texas counties, Rep. Miller – Atascosa, McMullen, Duval, Bexar and Jasper. Am I now to be treated as a second-class citizen as a result of your impending bill? Why? My tax dollars are of course worthy – but basically I need to pay up and then shut up? Is that a fair way to treat fellow Texans? Taxation without representation? We fought very long and hard here in San Antonio to achieve our non-discrimination ordinance. I don’t really understand what the stated goal of your bill is about other than returning millions of Texans to an unprotected, uncertain and deeply divisive existence.

For MILLIONS of Texas this is indeed a very, very serious concern. Your proposed bill seeks to eviscerate discrimination protection on the basis of sexual orientation and gender identity. I think we can safely say that Marriage Equality will be the law of the land by summertime. Why now, Rep. Miller – why now are you lashing out against your fellow Texans? What is your purpose other than to placate bigotry and foolishness?

And why does ones individual religious preference and beliefs supersede my rights as a fellow citizen? Can you explain that one? We’re not asking that someone stop believing in their faith – far from it.

WE’RE ASKING TO BE TREATED FAIRLY, EQUALLY AND WITHOUT BIAS – THE SAME AS ALL TEXANS DESERVE.

San Antonio Mayor Ivy Taylor and the city's business community are not among those who signed amicus briefs asking the U.S....