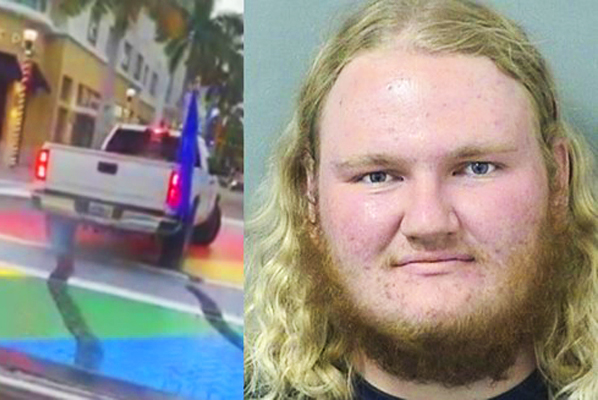 A Donald Trump supporter is accused of intentionally defacing an intersection painted in rainbow colors to celebrate Pride Month in Delray Beach, Florida. (View the complete video at this link.)

A video posted to Facebook shows the truck of 20-year-old local Alexander Jerich pulling burnouts in his truck to leave long skidmarks over the freshly painted intersection. The corner had been painted for two days before Jerich defaced it while participating in a birthday rally celebrating former president Trump’s birthday. Jerich turned himself in to Delray Beach police on Thursday. He faces misdemeanor charges of criminal mischief. The charges carry an enhancement based on evidence of prejudice that makes them a felony. The arrest report shared by Delray Beach police makes clear that they believe Jerich intentionally damaged the Pride Month artwork as a hateful act.

Jerich is currently being held at Palm Beach County Jail.

Jennie Livingston’s cult documentary Paris Is Burning and — like it or not — the music video for Madonna’s derivative...