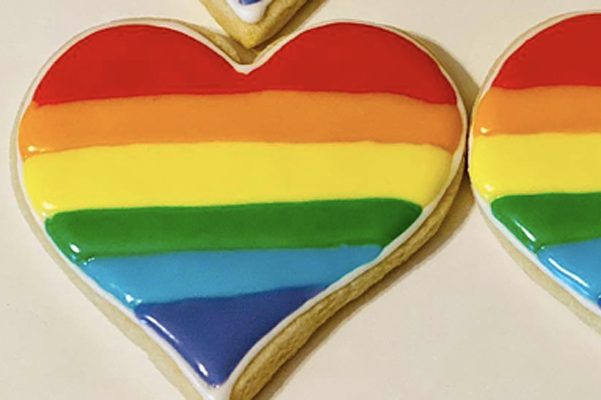 When Lufkin, Texas bakery Confections posted to Facebook to spread a message of “More love, Less hate,” owners Dawn and Miranda Dolder weren’t expecting to receive the latter in spades.

But after a post highlighting the shop’s special rainbow-striped Pride Month sweets, the Dolder sisters revealed that they’d gotten backlash in the form of lost social media followers and cancelled business.

“Today has been hard. Really hard,” reads a Facebook post from Thursday. “… My heart is heavy. Honestly, I never thought a post that literally said ‘more love, less hate’ would result in this kind of backlash to a very small business that is struggling to stay afloat and spread a little cheer through baked goods.”

Confections received hateful messages in response to the Pride cookies, and one customer even cancelled an order of five dozen cookies that had already been produced and were awaiting pickup, according to its posts.

However, when news of the negative response spread, the community rallied, lining up around the block to purchase sweet treats in support, according to the owners’ posts. The outpouring was so great that the business was forced to close early to meet demand. “We’ve sold out,” Dawn Dolder wrote via Facebook on Saturday. “All this attention on our small business is very humbling… in the 11 years we’ve been open, we’ve never seen anything quite like this.”

After the bakery ran out of items to sell, customers instead donated to local animal rescues in its name, the owners also said. The sisters — and their “fabulous baker Felicia” — are still baking the rainbow cookie, they added.

Community members and businesses across the city are offering events and fundraisers for San Antonio's LGBTQ+ community, including new ones...