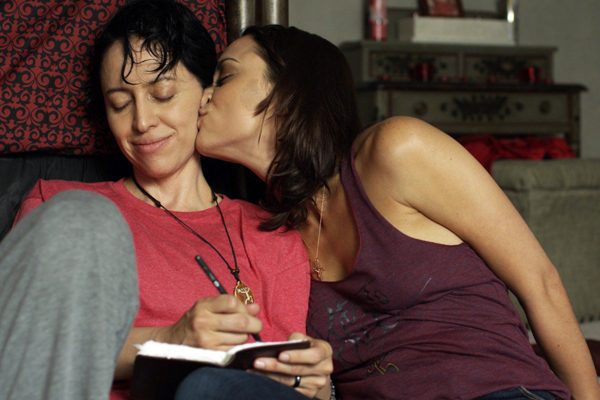 Adelina Anthony and Carolyn Zeller in "Bruising for Besos," which was screened on February 25 at Cine Festival.

CineFestival, which runs from February 24 to March 4 at the Guadalupe Theater, will present Brusing for Besos (2016), written and directed by Adelina Anthony, on February 25 and Go Fish (1994), directed by Rose Troche, on March 2. Both women will be present for the screening of their films.

Anthony is a Chicana actor, playwright and director. She was born on San Antonio’s West Side and now lives and works in the San Francisco Bay area.

Bruising for Besos was originally a one-woman show Anthony developed in 2003 while she was a graduate student at Stanford University. Using humor and pathos, the plot explores the psychology of two women involved in an abusive relationship.

The play premiered in 2009 at the Los Angeles Gay and Lesbian Center earning Anthony a nomination for Best Solo Performance from LA Weekly. The screenplay for Bruising for Besos was selected for the 2014 Sundance Writers Intensive workshop. The film premiered in 2016 at the Frameline Film Festival in Berkeley and San Francisco.

In writing about the film in Remezcla, Pili Valdés explains, “If you’re a 27 Dresses type of gal skip Bruising for Besos. The montages in this one are rough. The drama follows Yoli (Anthony) and Daña (Caro Zeller) as they fall in love. It is passionate and it is violent. Considering that 35% of women in same-sex relationships have experienced domestic violence in their lifetime, this is not your Blue is the Warmest Color lesbian film. Adelina Anthony deals in reality, hoping to open up a conversation about these issues.”

During an interview with Dino Foxx for Out In SA, Anthony says she especially is proud the cast of her movie is almost exclusively composed of LGBT actors. “While this may be the first time an out Xicana lesbian actor plays a Xicana lesbian protagonist in a feature film, it is equally important to note that almost all of our major supporting roles have been cast with out queers and a trans people of color,” she said. The cast of “Go Fish”

Troche, who was born in Chicago to Puerto Rican parents, launched her career making independent gay films and has gone on to work in Hollywood where she’s made her mark in television, directing episodes of Six Feet Under, Ugly Betty, Law & Order, The L Word and numerous other projects.

For Go Fish, Troche and her partner Guinevere Turner, who wrote the screenplay with Troche, took a minuscule budget and produced a film in 1994 that grossed $2.5 million. The movie was one of many LGBT films said to usher in the era of the New Queer Cinema of the 1990’s.

Go Fish is a movie about a circle of lesbian friends living in Chicago. One of the main characters, Max, is a young coed who becomes involved with an older woman despite having a long distance relationship with another woman. A secondary plot follows Max’s roommate, Kia, whose girlfriend is struggling with tough times at home.

In his review of Go Fish, film critic Roger Ebert wrote the film “is like one of those underground movies of the 1960s in which the purpose was to show a small group of friends celebrating a lifestyle which the audience could, or should, emulate. It is casual, unsensational, meandering, talky, and possesses a certain warm charm. There’s a documentary sense to it: We feel the characters are drawn from life, and that the filmmakers are uninterested in plotting except in the mildest way.”

Go Fish is being presented at CineFestival as a “Throwback Thursday” feature.

At the turn of the 21 century, San Antonio could boast of immensely talented artists whose bodies of work illustrated...