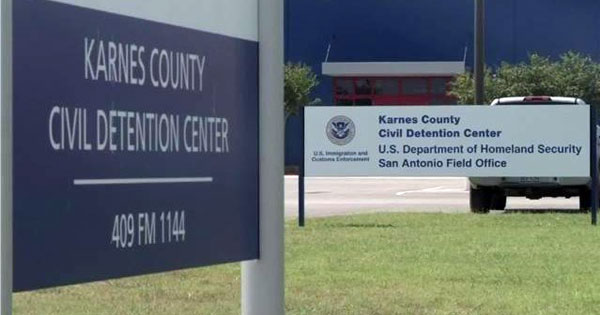 Two groups are staging a vigil on Thursday, January 22 at the Karnes County Civil Detention Center, where undocumented immigrant families are housed and where evidence has emerged of ongoing sexual assaults of women detained in the facility.

UltraViolet, a national group that is “mobilized to fight sexism and expand women’s rights, from politics and government to media and pop culture,” and GetEqual, whose mission is to “empower the lesbian, gay, bisexual, transgender, and queer community and our allies to take bold action to demand full legal and social equality,” are organizing the protest.

The UltraViolet web site describes what is believed to be occurring at the for-profit facility in Karnes, “Male guards at Karnes County Residential Center have open access to women detainees’ cells at any time of the day or night. Women detail an environment of rape and harassment, in which they are often told that they will receive assistance with their cases or money in exchange for sexual favors.”

The groups say they will present 40,000 petition signatures calling for the closure of Karnes and an investigation into the sexual assault of women detained in the facility. Speakers at the protest include Patrick Fierro of GetEqual Texas and  Melissa Byrne and Gabriela Garcia of UltraViolet.

According to a press release, there will be dozens of Texans with giant lights spelling out ‘Stop Rape’ and ‘Close Karnes’ in addition to signs calling for the investigation and closure of Karnes.

“We are horrified by the sexual assaults of women occurring at the for-profit Karnes Detention Center” Shaunna Thomas, co-founder of UltraViolet said in a press release. “Women across the country are watching the Department of Homeland Security on this issue, and we demand action to investigate this reprehensible facility. The for-profit detention of women, children, and families has proven to be a complete disaster, and these abuses must end.”

“Until the U.S. stops inhumanely detaining undocumented individuals and families, systemic, institutional abuses like those at Karnes will continue,” said Patrick Fierro of GetEqual Texas. “For years, both government-run and privately-run detention facilities have proven unable to safely detain folks — and the abuses against women and LGBTQ individuals are particularly grotesque. Undocumented women, men, and children are human — and deserve to be treated with respect.”