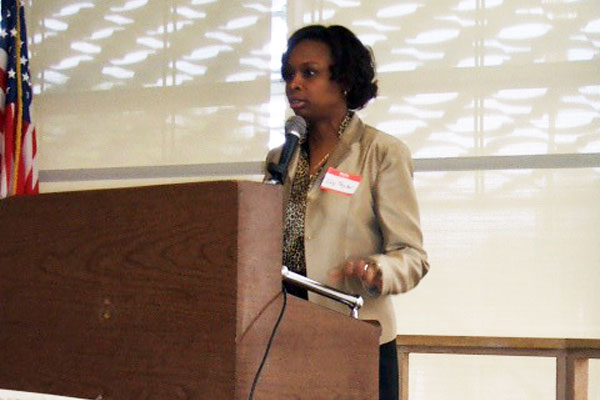 The interview was published on Wednesday, January 13. In it Estrada and Taylor discuss her time in office and the issues she’s been dealing with since she was appointed mayor. She also tells him that she still doesn’t know if she’ll run for mayor next spring.

Toward the end of the interview, Taylor and Estrada recall her “no” vote last year on the nondiscrimination ordinance and what she said before she cast her vote.

. . . Within the online LGBT community, her original statement, which was attached to her vote against expanding the Non-Discrimination Ordinance to include sexual identity and orientation, went viral.

“‘You got the wrong sister’ . . . really spoke to the fact that regardless what the issue is, I think people nowadays expect political correctness, and that is very frustrating to me,” she says. “I had been told that, ‘You’re black, it would look bad for you if you don’t vote this way.’ And I didn’t like that at all. This is supposed to be nonpartisan government, right?”

. . . She remembers the vote as challenging. “I did the best that I could do given the information that I had. And [with] my personal beliefs and convictions … I didn’t see a path at that time. I believe in equality, [but] those issues—however [LGBT people] live their lifestyle—that shouldn’t come into [a] public forum as far as whether I’m going to vote for you.”

The mayor’s tongue-tied explanation, filled with unsteady clauses and gaps, may be a sign that she is still uneasy addressing LGBT concerns.

In 2011, the Current noted then-City Councilwoman Taylor’s apprehensiveness when she attended the Stonewall Democrats endorsement forum:

Perhaps what was most surprising about the day’s discussion was that a sitting councilmember like Ivy Taylor would expose herself as being so uncomfortable about LGBT issues. In response to a candidate’s survey, Taylor said that if she were endorsed by Stonewall she would not carry that endorsement on her website or campaign literature. “Many in our area would look at that as something that would be divisive,” Taylor told the group. She added that she’d be happy to meet with her gay, lesbian, and transgender constituents, but she wouldn’t be marching in the annual Pride Parade . . .

The complete San Antonio Current interview with Mayor Taylor can be read at this link.

A San Antonio transgender man, who helped raise two boys while in a committed relationship with their mother, is seeking...