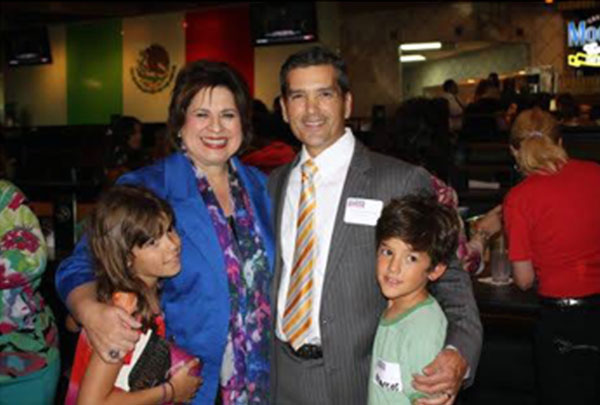 Before they were mayoral opponents: State Sen. Leticia Van de Putte and State Rep. Mike Villarreal with his kids. Both politicians have announced they will run for Mayor of San Antonio.

State Senator Leticia Van de Putte ended weeks of speculative chatter and confirmed on November 19 that she is running for Mayor of San Antonio. The San Antonio Express-News reported:

For months, there had been growing speculation that she would enter the fray, and more recently, she had said she was “praying for guidance” about whether to tackle a mayoral race.

Van de Putte, a third-generation San Antonian and West Side Democrat, told the San Antonio Express-News on Wednesday that since entering elected office in 1990, she has fought for the people of San Antonio.

“I think any leader has to have a basis of a character and of that makeup that makes them strong — and not strong physically and maybe not strong emotionally, but strong in the sense of commitment — and for me, that strength comes from a faith and family,” she said in an interview at the newspaper. “And so the decision that our family has made and that I want is to be the next mayor of San Antonio.”

Van de Putte is the second politician to throw a hat into the mayoral race. State Rep. Mike Villarreal announced his candidacy on November 9. At a press conference, he said he would be leaving the state legislature, having just won the mid-term election by default because he had no opponent.

The announcement by Van de Putte will pose a challenge for LGBT voters considering that both she and Villarreal are strong allies to the community. Both politicians have proposed pro-LGBT legislation during their tenures in the State Legislature and both are regularly seen at community events. Another ally, County Commissioner Tommy Adkisson, also has expressed his interest in running.

Last year, Van de Putte proposed Senate Bill 237 in the Senate Committee on Economic Development making her the first Texas senator to ever sponsor an inclusive non-discrimination bill. SB 237 prohibited employment discrimination on the on the basis of sexual orientation or gender identity or expression. The bill was left pending in committee.

In a straw poll being conducted this week by Out in SA, Villarreal and Van de Putte have so far garnered the most votes with Tommy Adkisson,  Ron Nirenbeg and “Other” bringing up the rear.

“On our first date I told Chad that I would be moving back to Texas in five years,” Anthony says....