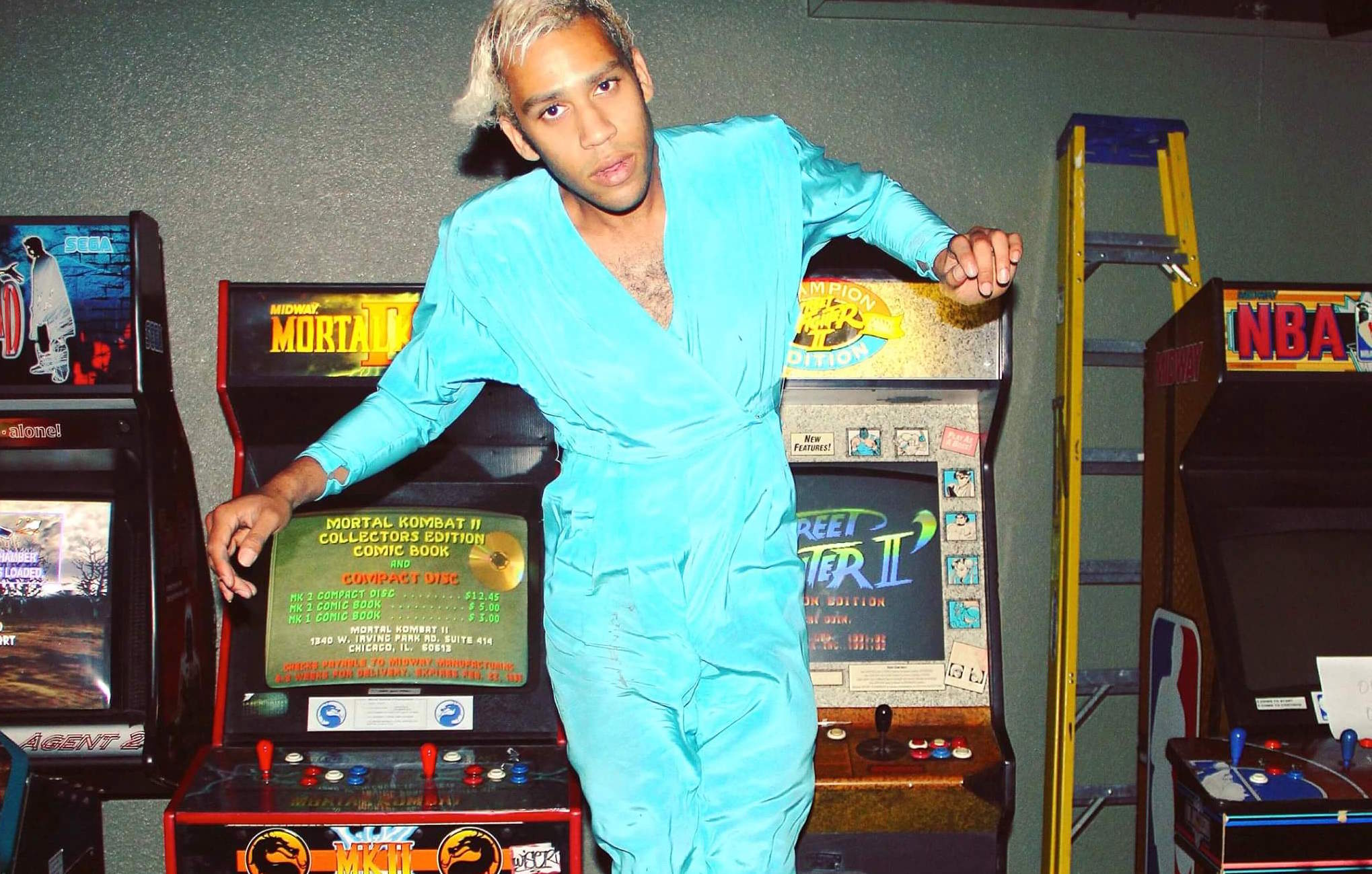 I’d met Wayne Holtz the photographer, shooting indie bands at Limelight and Hi-Tones. And I’d met Wayne Holtz the fashionista, kicking it with the vogue troupe House of Kenzo. But I’d never met Wayne Holtz the “pop star,” until he descended on Paper Tiger this summer, captivating an unsuspecting crowd with baritone crooning and a choreographed performance complete with backup dancers and costume changes. Amid a shower of rainbow lights and pulsing drum kicks, a surprise element suddenly upstaged all else firing through my consciousness: Holtz started jump-roping on stage. I wasn’t ready. No one was ready. But we got ready and all wanted more. I recently caught up with the androgynous multitasker and social-media maven to find out more about his artistic trajectory and what else is cooking in the Haus of Holtz.

So, basic shit: Where are you from?
I’m from San Antonio; I’ve lived here my entire life, actually.

Is that where you got into photography?
Yeah, I was historian for my class [for three years]. But … there were obviously photo triggers because it was an artsy school.

What did that entail?
I just had to take pictures of everybody … Com-Arts was just an extremely liberal school and I was having a ball with all the fantastic-looking people and all the crazy stuff we were doing … so I just started taking pictures constantly, just to hold onto those memories. I was taking so many pictures that someone suggested I run for historian — so I ran, and basically just took pictures of everyone hanging out. I categorized it well and my job was just to be at all of the events, document [them] and, at the end of the year, put together a slideshow for everyone to view. It was kind of an obsession, and really just a way to connect with people. I remember when we first met, I was playing a set with my band at the time … You were shooting pictures and hanging out with Roxy [Eguia] from House of Kenzo, who was on the bill as Rainbow Starchild. How did you first connect with House of Kenzo?
I initially met Roxy Eguia years before at a house party … she had pink hair and we were in line for the bathroom and I was like, “Bitch, I’m triggered … who are you?” I thought she was so sexy that I had to get to know what she was doing …  I found out she was a designer and we just started hanging out all the time. I was working at a crazy antique store called Cesar Vega Decor.

Where is that?
Off Fredericksburg and Woodlawn, but it’s not there anymore. The owner retired. But it was a wild antique store … it was the kind of place that, when you walked in, you were literally like …

Triggered?
[Laughs] Triggered by a ghost, girl, ‘cuz you literally felt like you were possessed. You know where Woodward Lumber is now? … It was that.

That place! Okay. How long did you work there?
I worked there for a year and a half, and there was a beautiful man — Jaime Cesar Vega … I drove by it one time, and I was just mesmerized by a birdcage that was sitting out front. I went in, and it was one of those places where you walk in and you can’t even move from the front of the door for a good 30 seconds. Wayne Holtz photographed by Chris Conde for Out In SA

That’s when you know it’s good.
Jaime was the only person working there. After a while, we got to know each other and I got fired from IHOP the first time — the second time I quit — and I asked him, “Do you need help?” And he was like, “Do you want to work in the shop?” So I ended up being there 60 hours a week for a year and a half.

Sixty hours a week?
Yes girl, I was the only person working. He literally wanted someone to take over so he could do other things outside like really bring things into the store, have time to shop around, etc.

Was that where you started to explore fashion more?
Well, that place was wild. And I gotta say: I was in a huge rut after high school … I went to college for half a semester. But I was just like, school is so goddamn boring and I hate math, so … I just stopped going. And I got depressed. But, I mean, listen, bitch, the whole time I was working. From the second I turned 18, I was out of the house [and] I had my own apartment. But I was feeling un-cute ‘cuz I wasn’t doing anything … I felt like everybody was just passing me by.

How old are you now?
I’m 26 … So when I went to work at Cesar Vega, it really just ignited a passion in me. Nobody knew about this place at all — only rich people and random antiquers knew this place existed … it was like mondo crazy house. So I started taking pictures again and started [their] Instagram. That’s when people started noticing who I was in this city, because of the Cesar Vega Instagram … When I first started working there, I threw an event with the Pastie Pops … Roxy was throwing fashion shows, so we were like “Let’s just do a show here. It’s the place for a show.” And that’s when some of the House of Kenzo members were first in front of me. There was Karma, who’s now in New York. He’s in Sia music videos. He’s performed with Lil Mama. He’s living right now. So we just put together this wild show and it was so gorgeous. We had 25 models. We put it together in two weeks and it was lit. Everyone had a fantastic time. It was pouring that night and we probably had 60 people there in that space. But really just being there and getting the chance to decorate — I was constantly decorating, moving things around everyday … So that place just reawakened Wayne. Wayne was dormant … But I went back to IHOP … I just wasn’t making enough money. I was homeless for a little bit and was living in the store for six months. It was crazy … Around the fall of 2014, [Roxy] brought the dancers in — that’s when I first met Breezy and Tony [from House of Kenzo] and when Ted from This Is Where Two Oceans Meet approached me about doing a show.

That show at Paper Tiger was probably the best local show that I’ve ever seen in San Antonio.
Oh my God, I appreciate it. At what point did you decide to transition to performing?
I really wanted to get on stage [after] I saw Westbound Departure, which is a local group. They’re on a hiatus … but [they] really showed me how to start a song, finish a song, bring it back together … keep everything moving and monumental the entire time and … love that you’re playing every time … But, girl, I’ve been trying to do a band for like four years. Bitches are lazy or busy … I only started writing songs in the last year.

How did you meet [bandmate/producer] Bobby Rivas?
I met Bobby when he was playing with Michael J. and the Foxes … I went to go see them and shoot their show at Sam’s Burger Joint … and he was playing lead guitar. I saw him again when I was covering Fuzzland Productions … Bobby was hot, so I was just keeping an eye on him. You know what I mean?

As we do.
Mhmm … So he saw my Facebook post [about wanting to start a band] and I needed someone who was ready … I really liked that Bobby came to me and was ready to just produce some fucking pop music … I really started writing music avidly … The two songs people liked the most were inspired by the podcast Straight Talk with Ross Matthews … [It’s] such a fun, uplifting podcast and … it triggered me hard … I wrote two songs for them [and] they premiered both of them on their show … So from there, I was just like, let’s go … People are bored and they’re fucking hungry for some good stuff — and I don’t write trivial music. Anytime that you hear a song from me, or see me perform, it’s going to be something that has a meaning — a clear meaning. No interpretations bitch, you’re gonna know what I’m talking about.

To keep up with Holtz and his projects, visit instagram.com/wayneholtz_ and wayneholtz.bandcamp.com.

Lady Base Gallery, a group created in 2013 to support local women and LGBT artists, unveils a new show on...