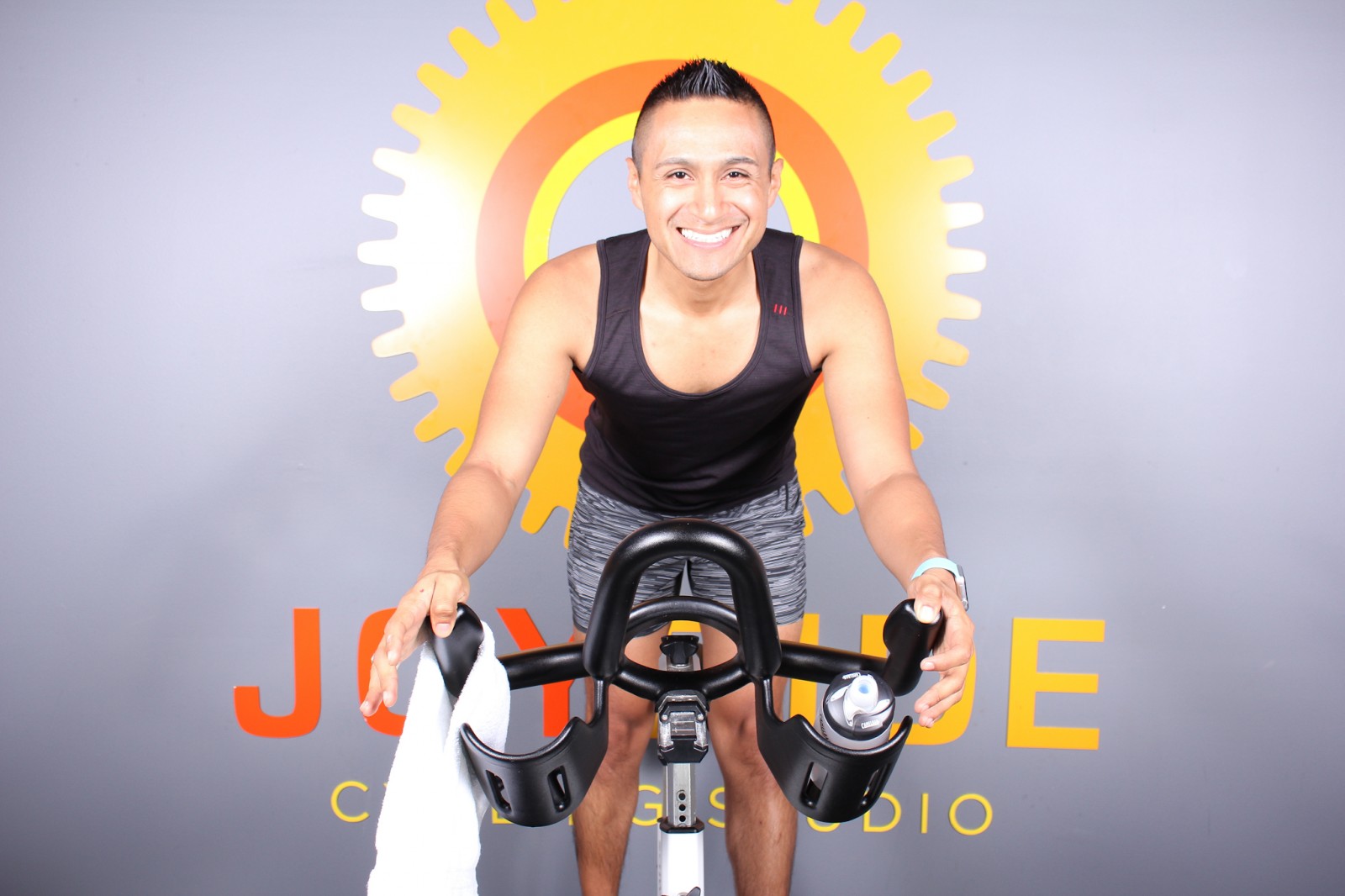 The doors close, the lights go out, the music starts pumping and an assembled crowd start to move and sweat to the beat. No, it’s not Saturday night on the Main Strip. It’s just a typical indoor cycling class led by Wesley Salazar at JoyRide cycle studio. Thanks to his high-energy playlists and magnetic personality, Salazar’s classes frequently sell out, with people clamoring for spots on the wait list.

To watch him in action, it’s hard to believe that this 32-year-old cyclist and marathon runner was ever a couch potato. But as a high school student at South San Antonio Independent School District, Salazar was overweight and under-motivated, eating at McDonald’s up to three times a week (sometimes twice a day). “Supersize” was a regular word in his vocabulary.

“I couldn’t run a quarter mile without stopping,” admits Salazar, who finally topped out at almost 200 pounds on his 5’9” frame. “I was in band, but other than that I was completely inactive.”

After being accepted to Texas A&M, Salazar realized that going away to college would offer him the opportunity to reinvent himself. Over the course of the next few years, he got off the couch, came out of the closet and started the journey to get fit. It was an uphill ride at times but Salazar stuck with it, relying on determination and focus to change his body — and his life. And today, when he isn’t working with the landscape architecture firm Kudela & Weinheimer, Salazar is planting the seeds of inspiration in others who want to do the same.

Putting the Wheels in Motion

When he decided to take charge of his life and his health, Salazar hit the ground running — literally. He cut out his beloved Big Macs, started jogging around the block and dropped 60 pounds in just four months. As a result, he developed hypoglycemia and became lactose intolerant — a condition he still suffers from today.

“I didn’t really know how to lose weight in a safe and healthy way,” he confesses. “I had been overweight for so long, I just didn’t think that being too skinny could be unhealthy.”

After that rocky start, Salazar began to educate himself. He joined a gym in College Station, began weight training and added more protein, vegetables and healthy foods to his diet.

By the time he graduated from A&M in 2006, Salazar weighed in at a healthier 150 pounds.

Later that year, Salazar moved to Houston and spent the next few years building his career and his endurance. He began competing in races, starting with 5 and 10K runs and moving up to half and full marathons. But after a few years he grew bored with running and started looking for more motivation. In 2010, he found it in the form of the MS 150, a bike ride from Houston to Austin that raises funds for the National Multiple Sclerosis Society. Although he didn’t own a bike at the time (and hadn’t ridden one since he was a child), Salazar signed up.

“It started because I was tired of running and I wanted a new challenge,” says Salazar, who will participate in his fifth MS 150 in April. “But over the years it became about so much more than that to me. It became about helping others.”

As part of his training for the 150-mile, two-day event, Salazar began taking indoor cycle classes, which sent his life spinning in a new direction. He became certified to teach and started leading classes in gyms in and around Houston. When he and his partner, a food service director for Central Market, moved back to San Antonio in 2015, Salazar took his cycling skills to JoyRide, and started selling out classes in less than a year. Spend just five minutes with Salazar and it’s clear why he has such a devoted following: He’s the real deal. There’s no ego here — just authenticity and a genuine desire to help people be the best versions of themselves. He puts his own spin on every class, tweaking the standard JoyRide drills and formats to keep it fresh and challenging.

And then there’s those playlists. For this devoted Britney Spears fan, the music is as much a part of the class as the drills. And he never uses the same playlist twice. “People tell me they love my class for the music and that means a lot to me,” Salazar says.

He spends hours combing the Internet to find just the right beats and mixes designed to get people moving, and carefully crafts his playlists to complement the JoyRide choreography. “Music is a driving force in exercise,” he explains. “It motivates, inspires, and pushes you. Rather than background noise, it becomes an essential part of the workout.”

Salazar expects 100 percent from his riders, but more importantly, he expects 110 percent from himself. In other words, this isn’t the guy to go to for a low-impact workout. “I can only push my riders as hard as I push myself,” he says. “I wouldn’t feel right telling them to sprint for 30 seconds on the bike if I couldn’t do it. I should be able to do that and more.”

This “all-in” attitude is a big part of Salazar’s success. He’s been where some of his riders are, and he understands how hard it can be to make major lifestyle changes. By giving his all every time he gets in the saddle, he hopes to make each and every rider feel like anything is possible. They look to him for inspiration, and that’s not something Salazar takes lightly.

“It’s a performance,” he says with a grin. “People pay good money to be there and I want to make sure I am giving them the best workout they can get. I want to help them grow and change and feel good about themselves along the way,” he adds. “I want them to be glad they came.”

Though Wu Tsang and Tosh are hard at work on their Artpace residency project, they agree to spare me half...