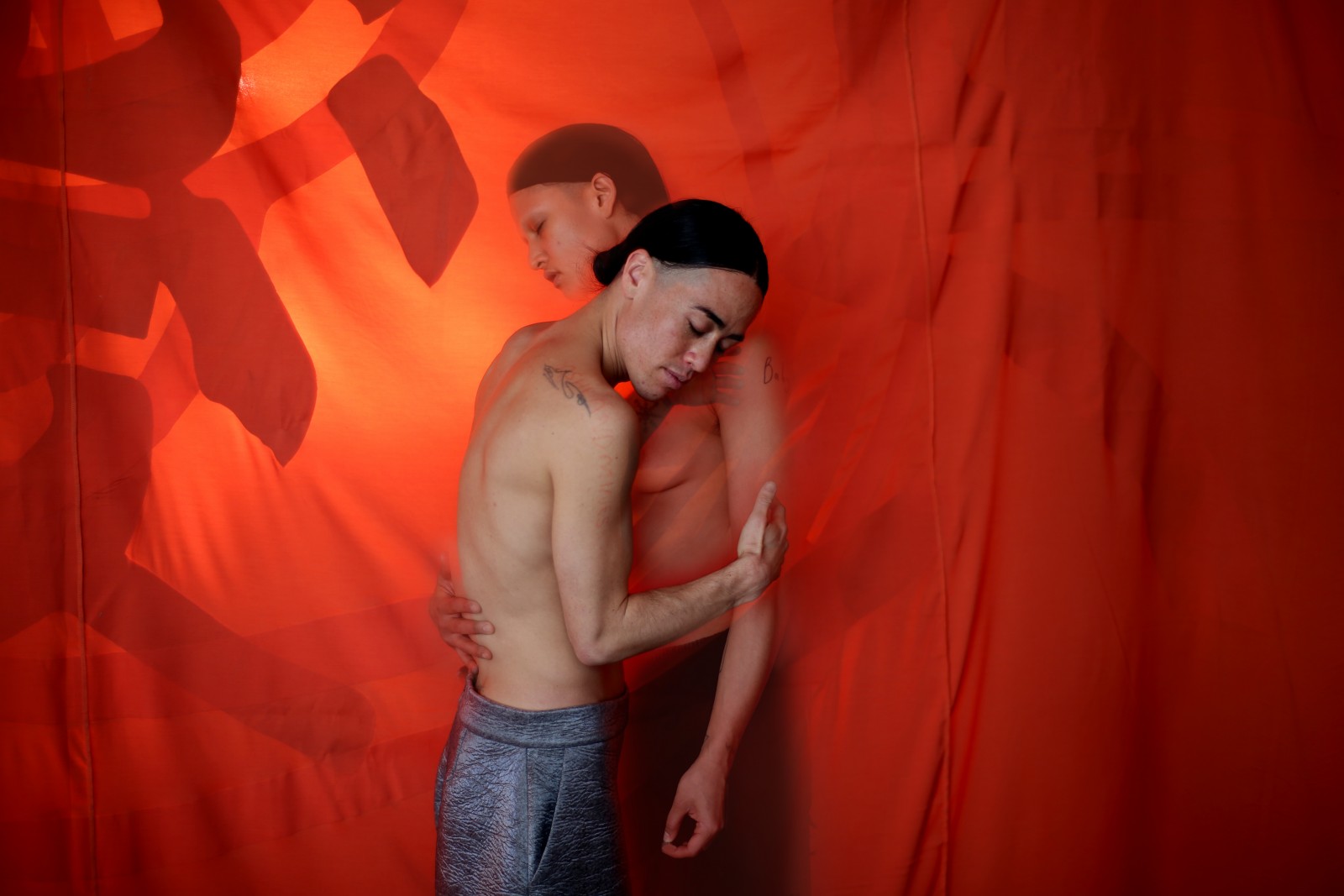 Though Wu Tsang and Tosh are hard at work on their Artpace residency project, they agree to spare me half an hour. The Los Angeles-based couple have received a dizzying number of intriguing deliveries, Artpace staffers tell me. In addition to their International Artist-In-Residence exhibition (on view through May 15), Wu and Tosh are readying a performance for the following week, a chapter of the ongoing text and movement project Moved by the Motion entitled You Sad Legend.

Wu Tsang is a filmmaker, performer and visual artist who annotates queer and trans experience, particularly as it intersects with communities of color. Her work has been exhibited in the 2012 Whitney Biennial, the New Museum Triennial, London’s Tate Modern and Stedelijk Museum in Amsterdam. Notably, her documentary WILDNESS won the Grand Jury Award for Outstanding Documentary Feature Film at Outfest in 2012, and centers on a redoubtable LA Latinx gay bar whose premises are overtaken on Tuesday nights by a cohort of younger, more deliberately political trans art performers, illustrating a kind of queer genealogy of nightlife practice. She’s patient and polite and writerly; she considers her answers.

Tosh is known on Instagram and sometimes in performance as boychild (@boychild). Her performance art has alighted at MoMA PS1, the Museum of Contemporary Art in Chicago and MOMA Warsaw. In person, Tosh inhabits a restless and lanky body self-territorialized with tattoos, including a prominent one across her throat reading “Bliss,” the name of a film character she and Wu continue to develop as a gender-fluid superhero. Tosh as boychild shares an ongoing saga of frame-by-frame performance with over 46,000 Instagram followers; her compositions, costuming, elegant bald head and symmetrical face in otherworldly makeup are captivating.

A guiding spirit of Wu Tsang’s is Qiu Jin (1875-1907), a legendary Chinese feminist revolutionary, writer and martial artist. Qiu Jin’s surviving body of written work is marked by ferocious political mission; calling for an end to the depredations of the Qing dynasty, for an equitable new chapter in Chinese history, for the rights of women and, poignantly, expressing her gut-level longing for an often-absent love — her intimate friend Wu Zhiying (1868-1934), herself a noted calligrapher. In 1904, Qiu Jin unbound her feet, adopted male dress, and sent to Wu Zhiying a love poem wrapped in the bridal gown from her earlier marriage to a man. Three years later, Qiu Jin was beheaded for treason after leading an anti-government insurgency.

“[Qiu Jin] had this very kind of gay/trans lifestyle. Her friendship with Wu Zhiying is [that of] a calligrapher and a poet, and the poet is also a swordfighter revolutionary, whose life is preserved and remembered mainly because Wu Zhiying became her biographer and wrote the story of her life.”

“I’ve been calling it a lesbian kung-fu film, and it’s not quite that,” Wu notes, “but it’s winking at it, as though it were a genre.”

While You Sad Legend takes inspiration and text from this couple’s story, I gather it is less literal, fully present in the moment, and pared down.

“[You Sad Legend] takes a form that Tosh and I have been developing,” Wu explains. “I play this figure of a voice, and she takes the figure of a mover, and we have a back-and-forth between language and body language.”

“[The back-and-forth] usually starts from text or some form of content,” Tosh says, “and the form comes from this necessity to communicate with each other, and each of us having two ways to communicate through different mediums. It’s all translation, actually. Language gives people a platform to come into [the live performance], and then we get to blossom into a moment … [whereas] the film will have its confinement.” She pauses. “Everything has its confinement.”

Wu adds, “I’ve been thinking about language lately as something that escapes. Neither of us speaks Chinese. I’m Chinese-American, and Tosh is Filipino-American. We have various connections to our Asian ethnicities, but the Chinese classical poetry has to come through translation, or mistranslation. There are Chinese poetry experts, and translations into different languages, and queer theory interpretations, but in the end, it becomes a calling forth of the language that you need.”

I have no idea what to expect from this performance. They seem fine with this. 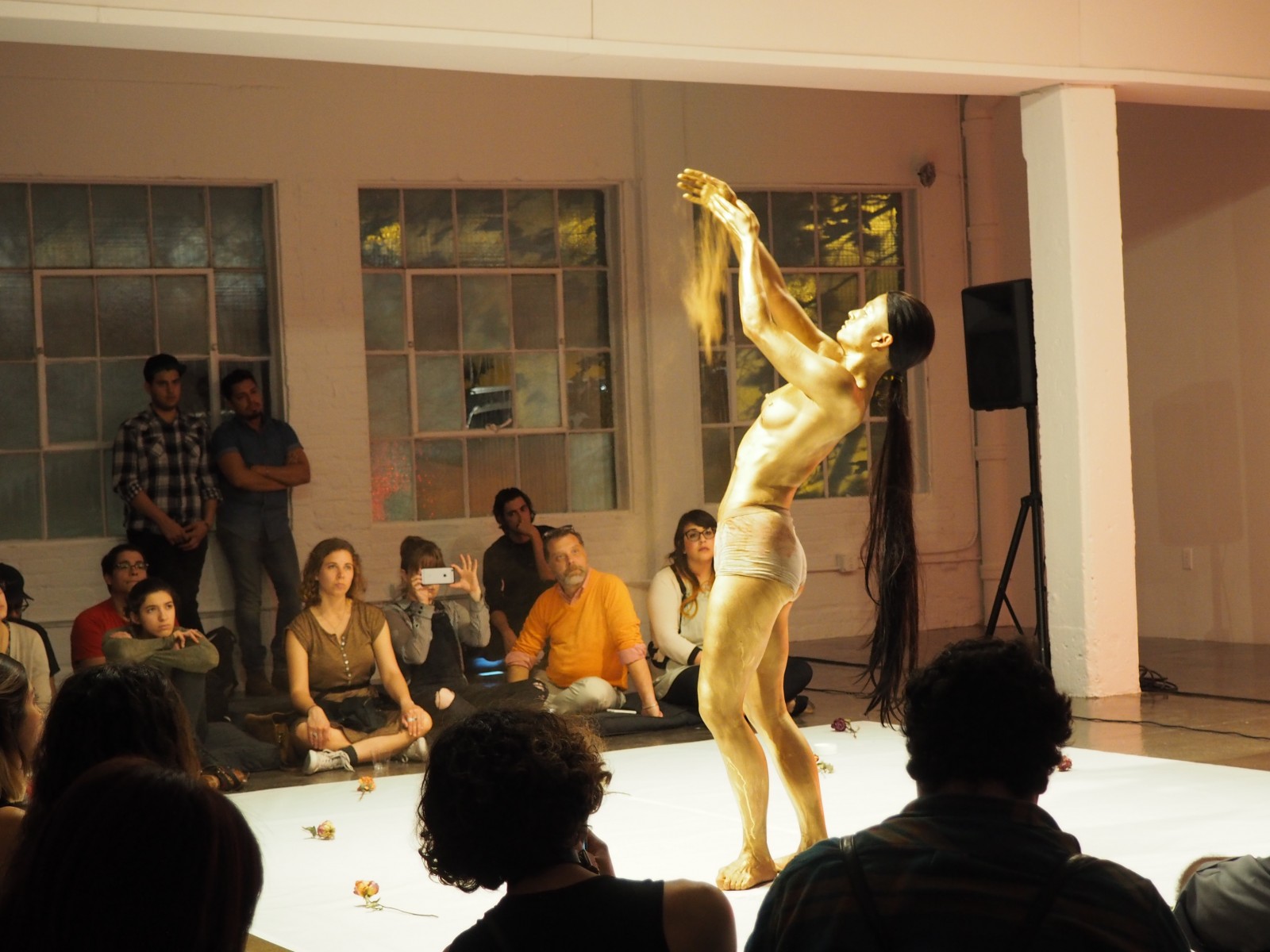 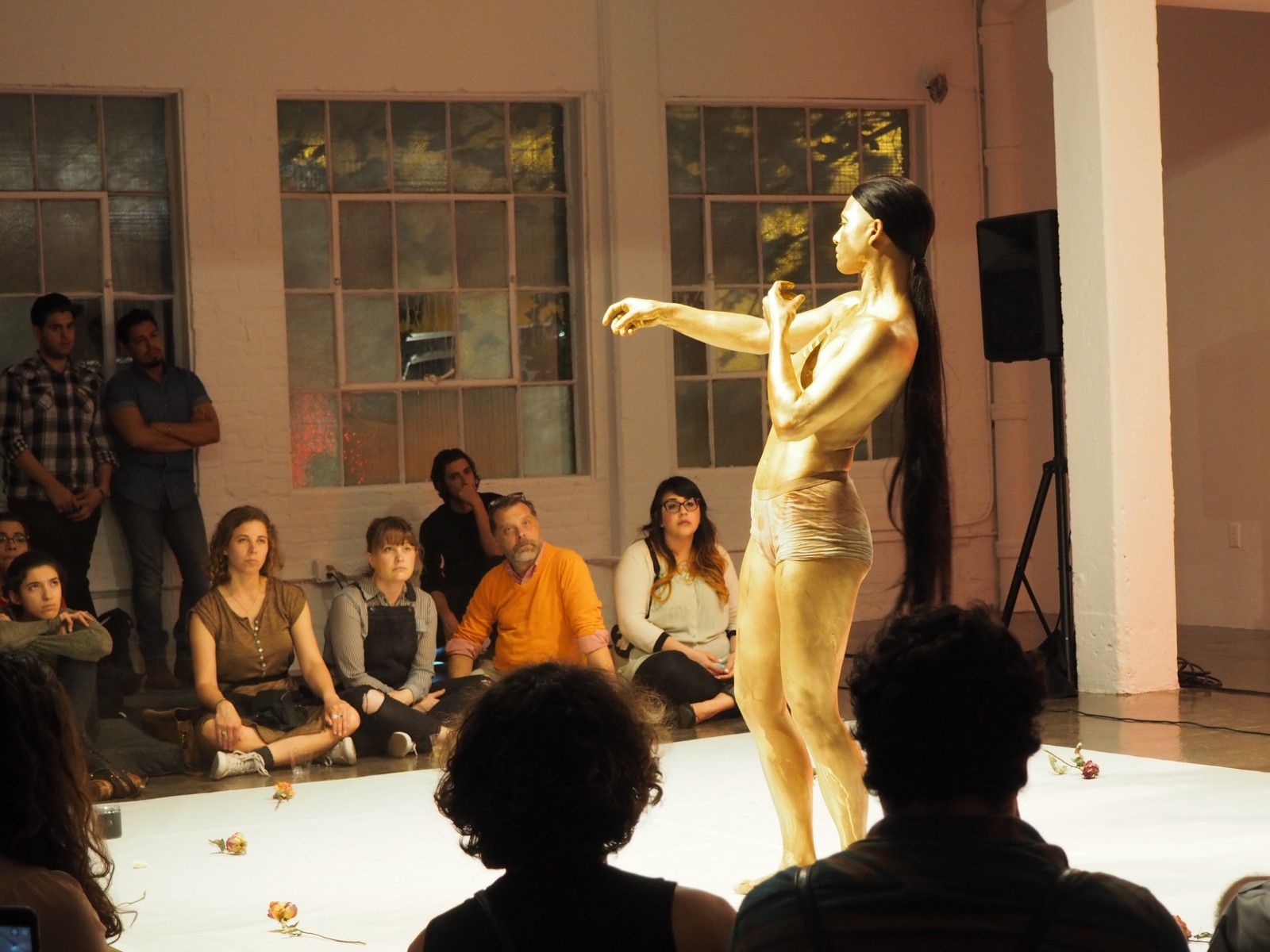 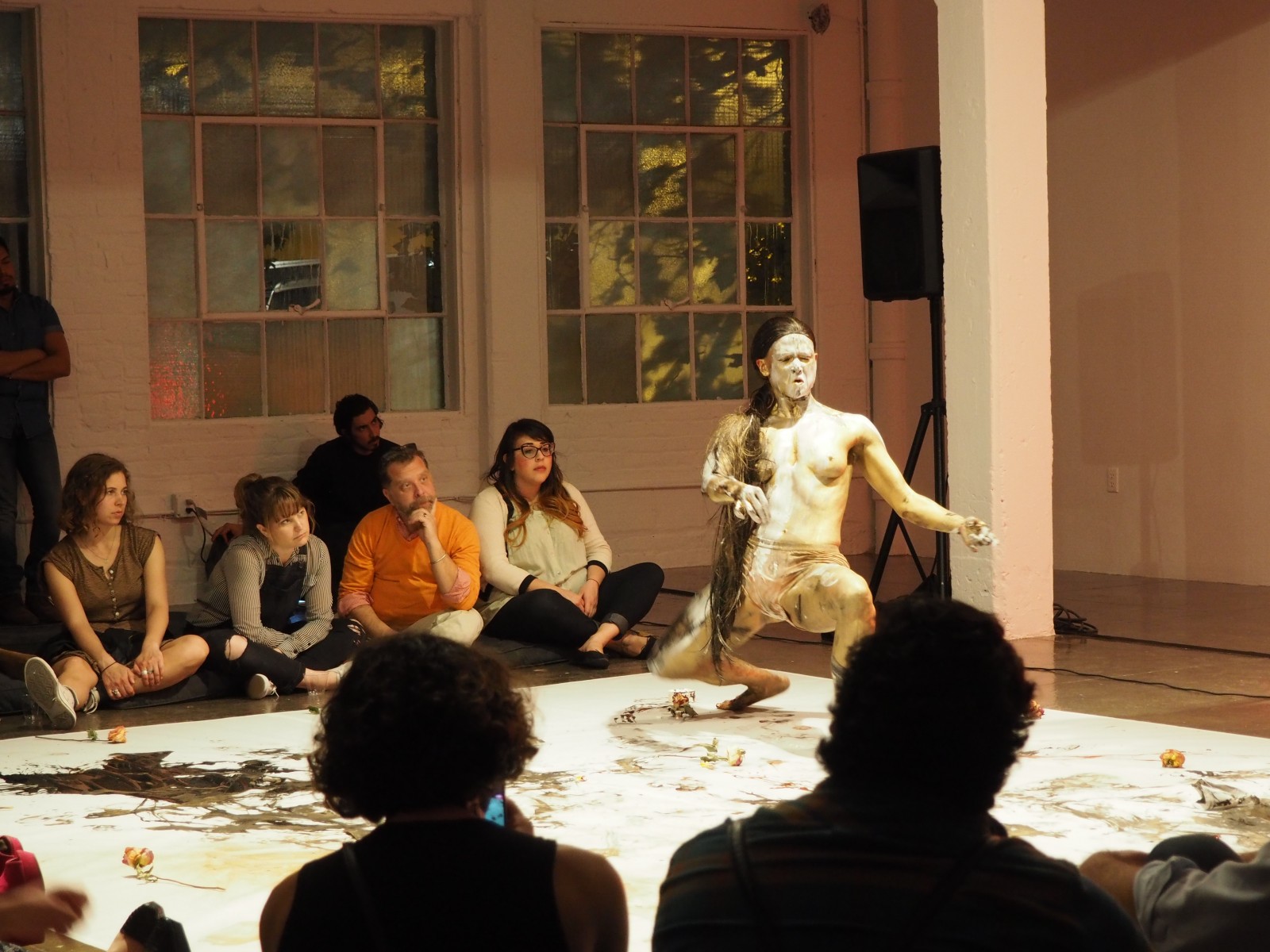 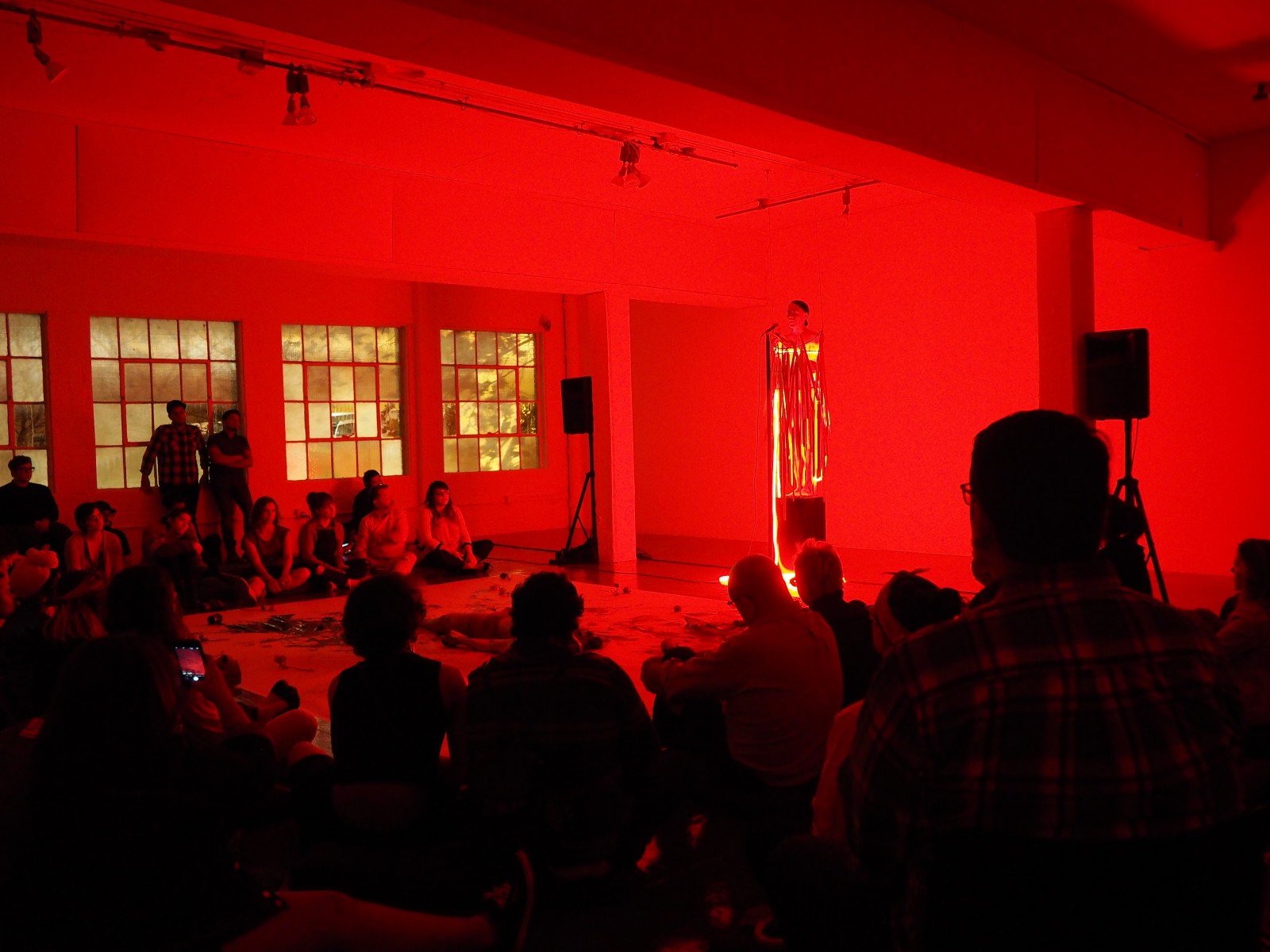 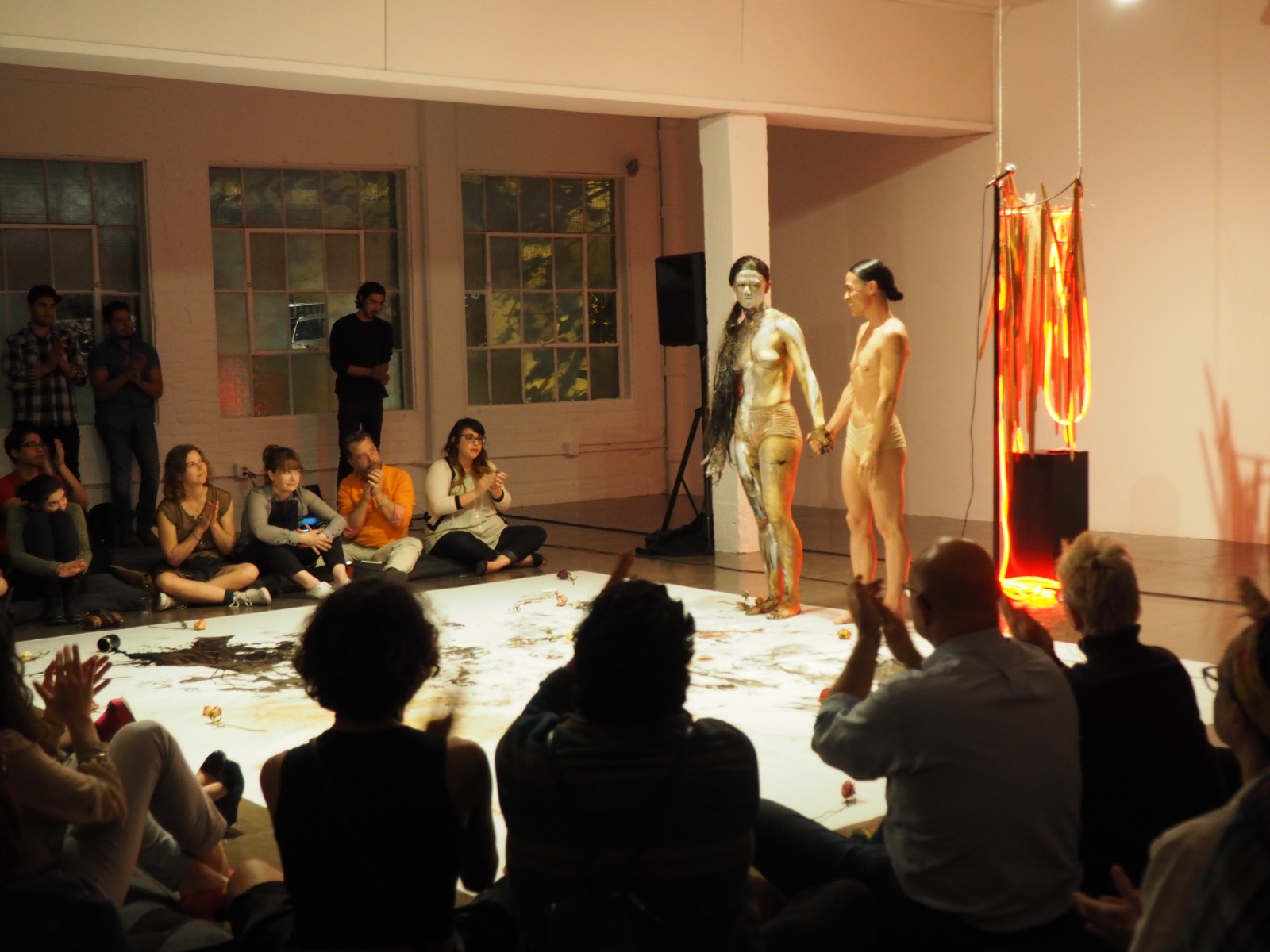 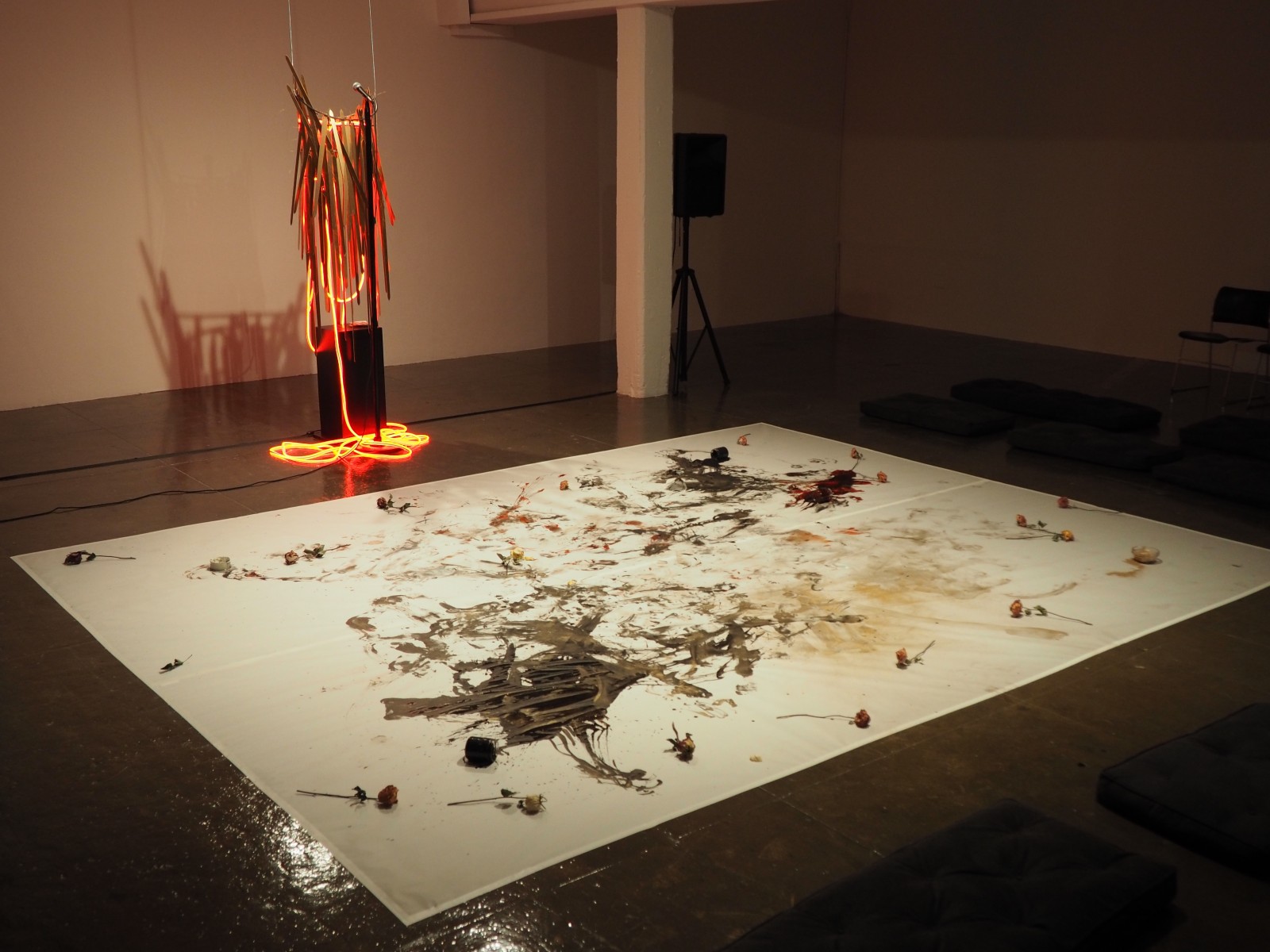 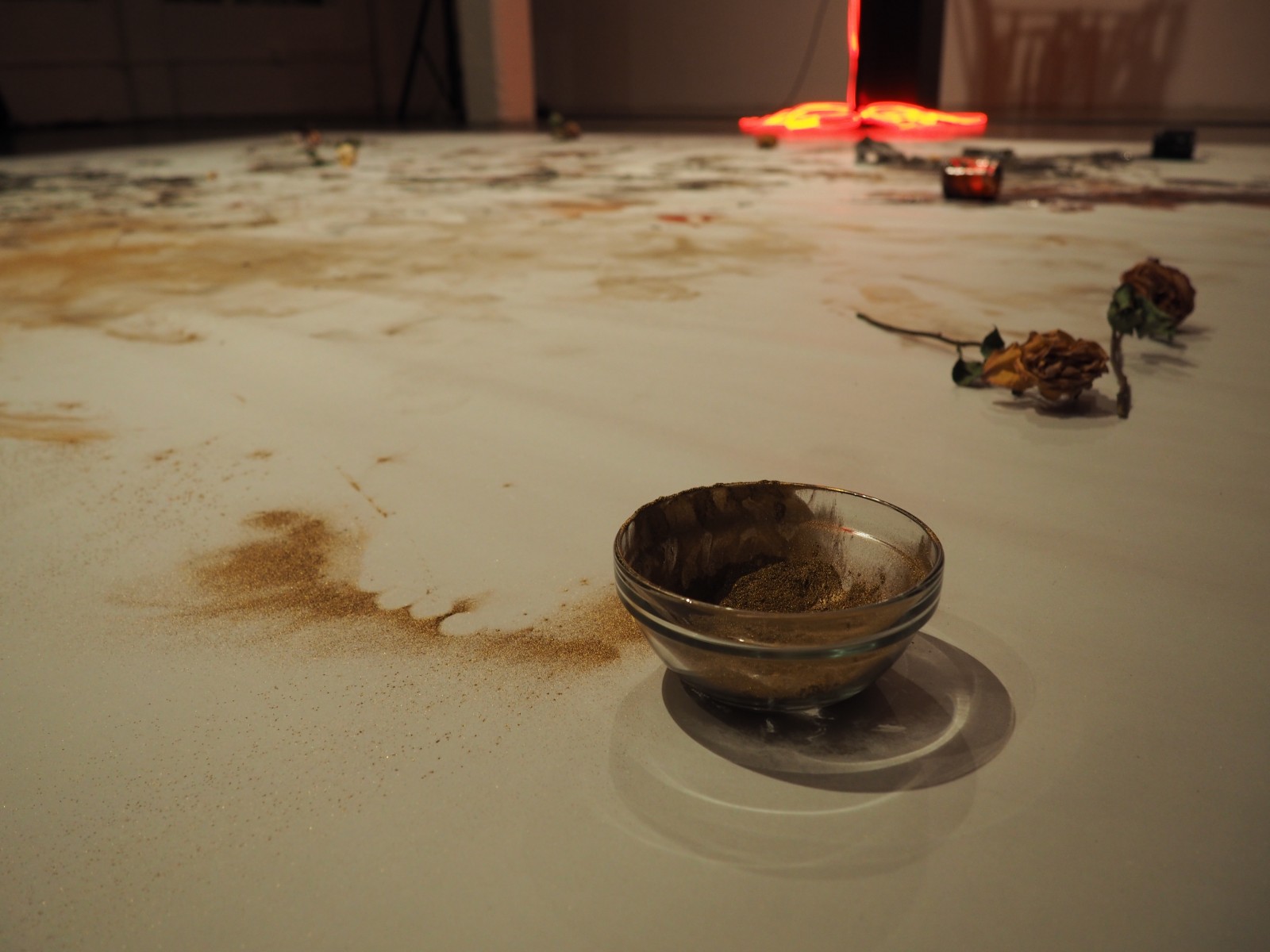 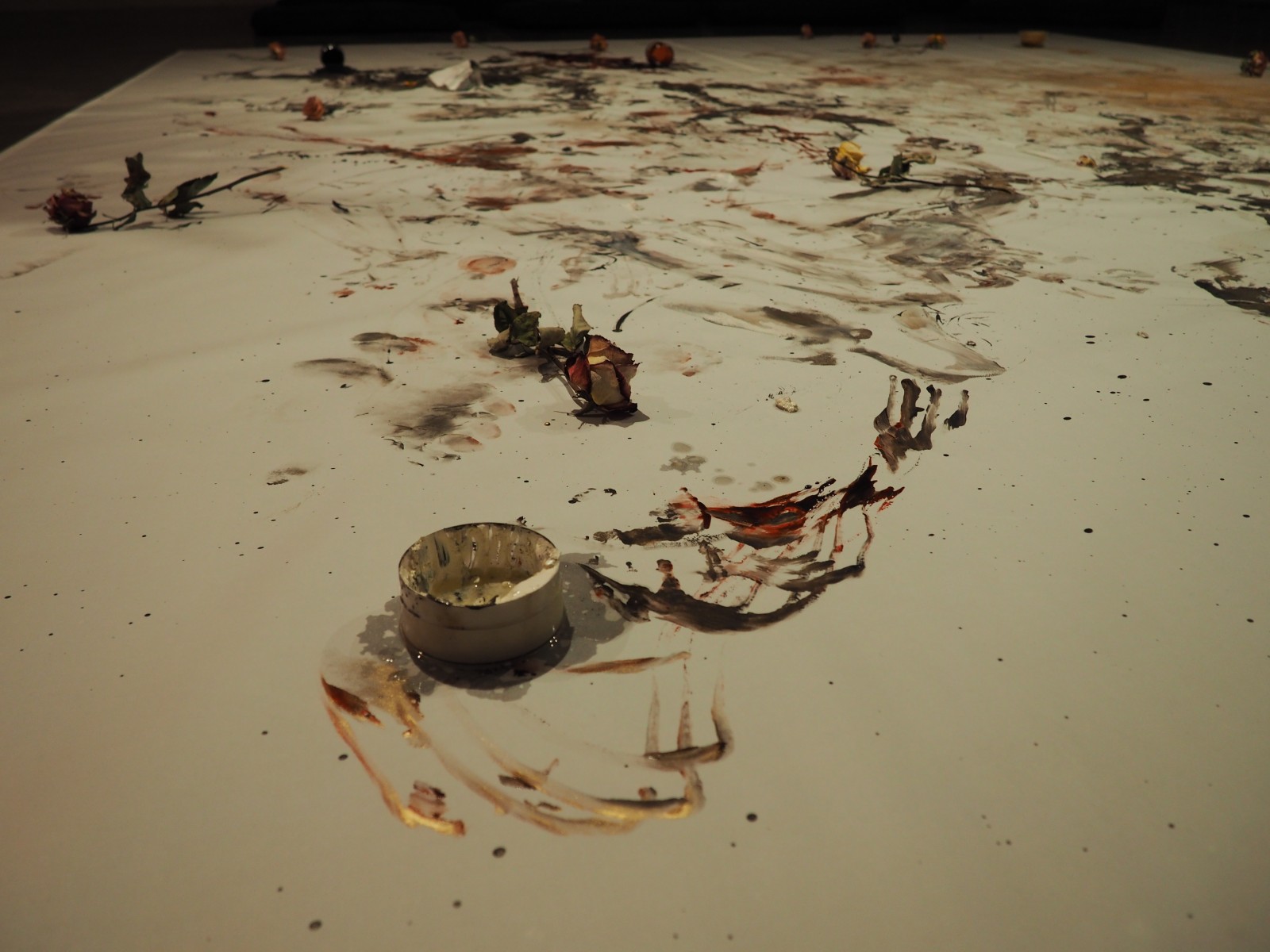 On the evening of March 2, a hushed crowd sits in chairs and on the floor in Artpace Studio C. The audience rings a tarp-like stage on the gallery floor the size of a solitary jail cell, upon which containers of powders and fluids sit alongside scattered flowers. Wu Tsang mounts a step into a spare, upright armature — a dress of swords, long brass-colored blades and a coil of red rope lights, poised behind a microphone.

She reads Qiu Jin’s poetry in a gentle, resonant voice and boychild enacts it, swinging her torso low to the ground or bending it backwards in bouts of concentrated breath. She smears white gobs of pigment across her upturned face, dusts herself with earth, crouches, pivots, extends, sweeps her ponytail through a puddle of viscous black ink, making calligraphy with it on the tarp’s white page.

Only once does boychild turn, and Wu meets her gaze. It’s for just a few seconds, but the moment between them embraces everybody.

At the press preview on March 17, neither Wu or Tosh is present, having both left for their movie premiere in Hong Kong. In Studio C, the tarp stands in for boychild’s performance. The dress of swords presides over it. There’s a feeling of aftermath; the calligraphy remains, the puddle of fake blood, the withering flowers.

But photographs have been installed — three are banner-like on the wall farthest from the entrance and look like grave rubbings. English text accompanies Chinese characters. The English reads: “THE LUSCIOUS LAND OF GOD IS SINKING,” “RAGE AKA FUCKIN ANGRY” and “I IMAGINE THE BREEZE IS YOUR CARESS.”

To the right, a trio of images act as a collaged portrait; the top photo depicts a carving of Qiu Jin’s face, proportioned believably over a live woman’s nude torso as two elements of the same body, half-historical, half-“live.” The hands clutch a sword between her thighs, pointing upwards, reminding us of Qiu Jin’s swordsmanship and showing us what “lesbian kung fu” might be. Lower, a photo of a stone brazier, below where the feet would be. On the ground, there’s an offering; a real grapefruit. In a portrait photo to the wall on the right if you’re facing the windows on the other side, Wu and boychild are in costume as the mythic couple. The image is filtered and cloudy, and looks like it could be a hundred years old. The heroes gaze at the camera in triumph.

Wu Zhiying resurrected Qiu Jin, according to tradition, after her lover’s execution. It was she who erected a memorial, wrote the story of her life and ensured her continuance. In their performance and exhibition, Wu Tsang and boychild achieve much the same, resurrecting those artists’ revolutionary partnership in their own.