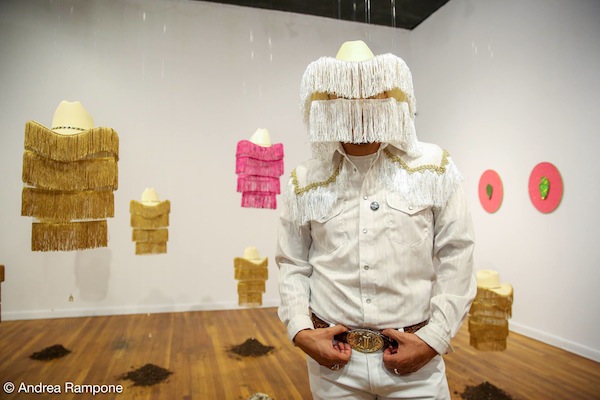 The 22nd installment of the Young [email protected] Artists exhibition at the Mexic-Arte Museum in Austin, Texas brings together eight emerging artists from around the state. Among the featured artists is San Antonio resident Jose Villalobos, whose work deals with LGBT issues and gender restrictions.

Born in El Paso, Texas to a conservative Mexican-American family, Villalobos is a graduate of the University of Texas at San Antonio and current artist resident and co-director at Clamp Light Artists Studios and Gallery.

In the installation Sin la S, Villalobos presents a series of chandelier-like cowboy hats that hang from the ceiling and are meant to “to explore the dichotomy of feminine and masculine materials within cultural symbols.” At the exhibition’s July 14 opening, which set an attendance record for the museum, Villalobos arrived dressed to the nines in a white cowboy outfit with the words Macho Maricon inscribed on the back.

“I think it just shows how versatile he is,” said curator Alana Coates. “Jose was trained in ceramics and his powerful installation work in YLA really demonstrated his ability to take his conceptual practice to new heights … His outfit was just as carefully and ingeniously designed … from the hidden text under the fringe and the glitter on the boot heels.”

Tell me a bit about your work Sin la S. What exactly does the title mean?
It means ‘without the letter S.’ It’s like a missing component to my last name … each hat represents a letter to my last name. They each have a jewel with a letter from my last name encrusted into it except the one with the ‘S’ isn’t present. The work is about my inability to pass on my last name in the tradition my family wants, which would be by giving a child to a woman. It becomes kind of like a broken chain…

Where did the idea for the chandeliers come from?
I’m not sure I’d call them chandeliers but I think it can be an appropriate term for them. The original idea I had was for them to impersonate people, like maybe they were floating, but that was before I decided to add the fringe and I slowly started editing my work. They kind of look like chandeliers but they also look kind of ghostly to me. It’s not kinetic so the result was kind of like a chandelier but also very ghostly for me. 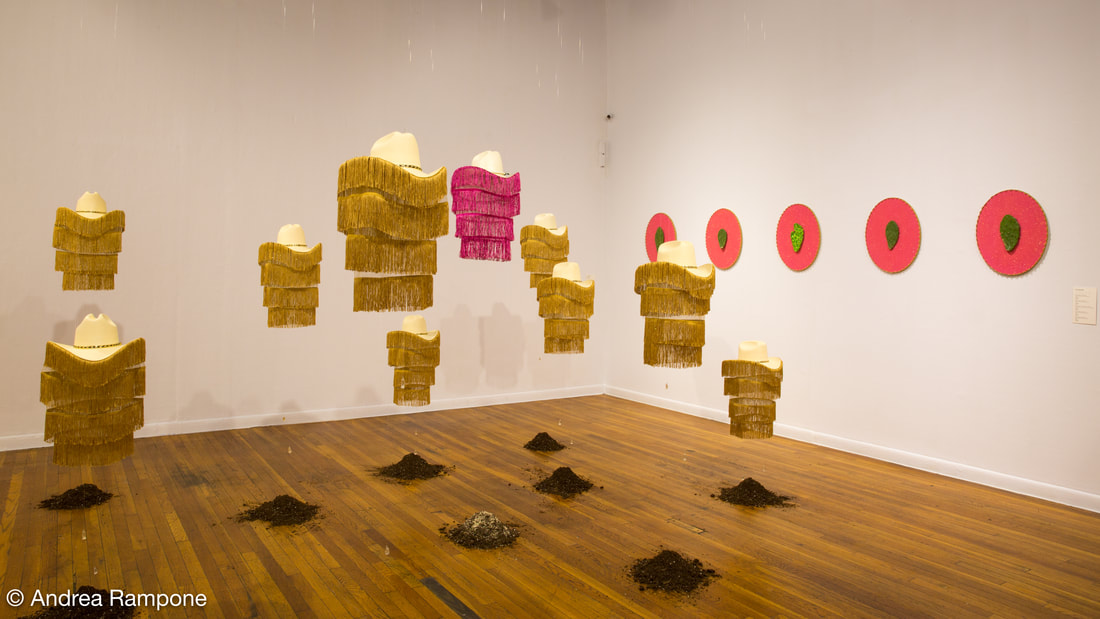 Is this your way of feminizing these cowboy hats?
I wouldn’t say feminizing … I’ve used that term for a lack of a better word. It’s a mix of things. It’s almost like poking fun at it but it’s also this way of breaking down and deconstructing these symbols of masculinity. Especially something that has power … I always see this in my family … the men wear these hats or sombreros as a symbol of power.

It also seems you’re glamorizing the feminine qualities.
Right. I think for machistas, they have such a fragile masculinity but they deny a lot of things. Something as simple as a color … no macho guy is going to be wearing fucking pink. Just growing up, I would notice these musicians or banda members, and they have theses suits that are very flamboyant. But it’s okay for them to wear it because they are making music…

Can the hats be worn?
Yes, they can be worn. The one I had on is probably easier to wear because there was only two layers of fringe and the others have two more added layers. 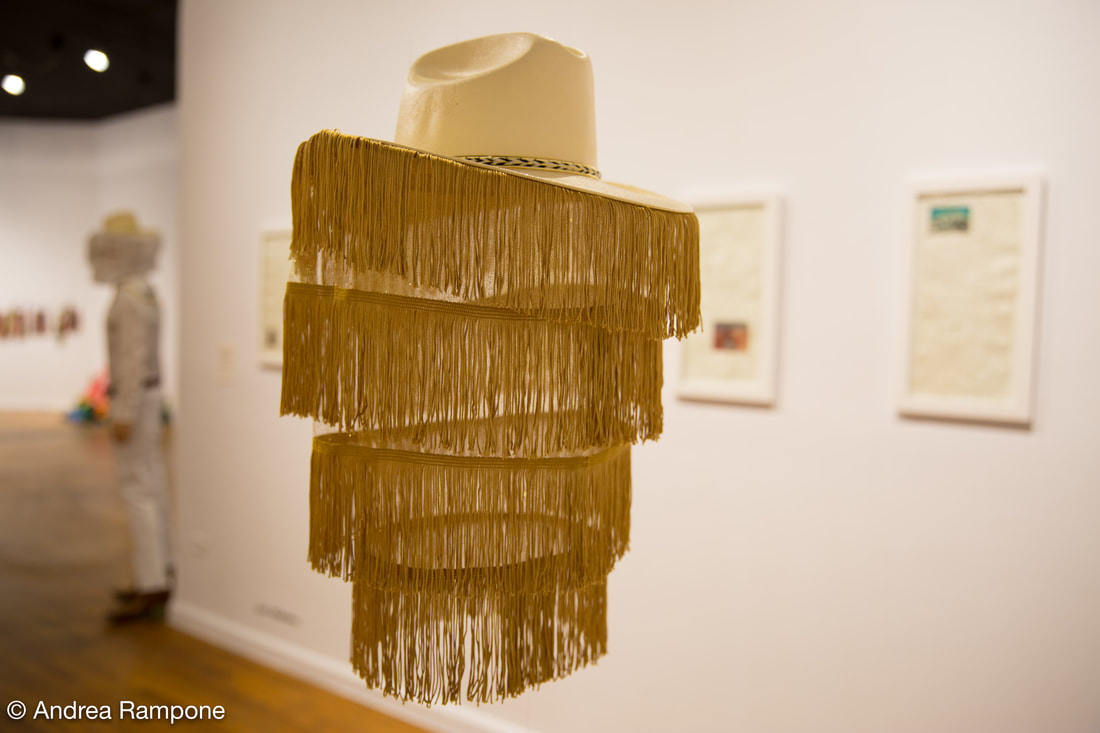 Tell me about your new Joterias collection.
The jewelry is just something I’m doing on the side … I kind of try to have some type of connection to my work but it not necessarily associated with my work.

How did you come up with that name?
Whenever me and my friends used to go out to the gay strip, we called it la joteria. It kind of came from that but also when I lived in El Paso there was this joyeria, meaning jewelry store, and I would always associate it with the word joteria for some reason. It’s funny; it’s not meant to be taken seriously. Some of the stuff I’m developing for the shop is a bit more comical and stuff geared towards gay pride.

With his 1932 play Blood Wedding and collection of poems Poet in New York (published in 1940), Federico García Lorca became one of Spain’s most revered poets...