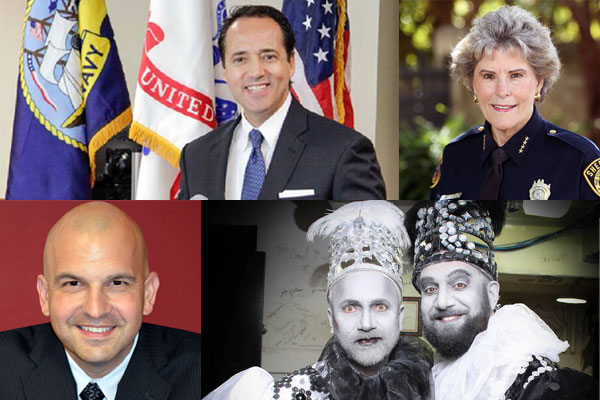 In April 2015, Menéndez worked to help prevent the passage of Senate Bill 2065, an anti-gay marriage bill that allows clergy and ministers to deny marriage services if doing so violates “a sincerely held religious belief.” He also co-authored Senate Joint Resolution 13 to repeal the amendment in the state constitution that prohibits same-sex marriage, a law that remains on the books despite the Supreme Court’s landmark ruling in Obergefell v. Hodges.

On November 14, Menéndez and State Representative Ina Minjarez introduced a law aimed at preventing and combating cyber-bullying. In December, he filed Senate Bill 269 which would increase the number of patients who would have access to medical cannabis in Texas.

As a result of his advocacy, in September, the Stonewall Democrats of San Antonio presented Menéndez with their Political Advocacy Award.

Candidates for equality: Javier Salazar and Susan Pamerleau
In 2016, the LGBT community had two candidates for Bexar County Sheriff who support equal treatment for all citizens of San Antonio.

When all the ballots were counted, Democrat Javier Salazar beat incumbent Republican Susan Pamerleau by about 4000 votes.

Salazar, a former SAPD officer, campaigned actively for LGBT votes. He marched in this year’s Pride Parade and said if elected he would appoint an LGBT liaison to the Sheriff’s Department.

Sheriff Pamerleau had a good relationship with the community. During her tenure, she met with local groups, most notably the San Antonio Gender Association, with whom she discussed issues relating to the treatment of transgender prisoners. Pamerleau also agreed to appoint an LGBT liaison. As a Republican, the sheriff was more circumspect in her support of LGBT issues, but was open and fair-minded in all her interactions with the community.

In September, both candidates were guest speakers at a forum organized by the local LGBT LULAC Council, Orgullo de San Antonio, marking the first time in the city’s history that two sheriff’s candidates debated before an LGBT group.

This is the first time Cornyation appointed two kings but not the first time it has had two monarchs. (In 2014, Steve and Jody Newman, proprietors of the Friendly Spot Ice House served as King and Queen Anchovy.)

Beers and Bobo, proprietors of W.D. Deli, were married in 2011 in New York City. In 2014, they were recipients of the Community Ally Award from the local chapter of the Human Rights Campaign.

Bobo and Beers worked tirelessly before and after Fiesta to help Cornyation raise a record-breaking $200,000 for local HIV charities and scholarships for theater arts students. Our unpopular mayor: Ivy R. Taylor
San Antonio Mayor Ivy R. Taylor remains an unpopular figure within the city’s LGBT community as evidenced by the boos and jeers she received when she appeared at a June 16 vigil for the victims of the Orlando shootings.

At the vigil, the mayor’s first-ever appearance before an LGBT audience, she offered a prayer but never mentioned the LGBT community. Many local activists saw Taylor as an unwanted guest at the event: Someone who came for the publicity in spite of the fact she never supported the city’s nondiscrimination ordinance, at one time calling it a “waste of time.”

Many have also been critical of Taylor’s LGBT Advisory Committee, which she formed in 2015 to much fanfare when she was interim mayor. Unfortunately, the committee only meets once per quarter and the agenda is set by the mayor. As a result, little or no progress has been made in addressing issues relevant to our community.

Local activists would like the city to enact an city-wide employment nondiscrimination ordinance but know such a measure will never be a reality as long as Taylor is at the helm. LGBT voters have an opportunity during the next mayoral election in May to move Taylor out in favor of a more LGBT-friendly candidate. Texas’ bathroom police chief: Lt. Governor Dan Patrick
Despite warnings from companies across Texas that a “bathroom bill” would be bad for business, Lt. Governor Dan Patrick remains steadfast in his plan to support such a law in the upcoming legislative session. The proposed measure would prohibit transgender people in Texas from using bathrooms that match their gender identity.

On December 7, the Texas Association of Business released a study that estimated Patrick’s  bill could cost the state up to $8.5 billion and the loss of more than 185,000 jobs.

In September, the NCAA yanked seven championship games from North Carolina where a similar law was passed. If the Texas Legislature passes a bathroom bill it could risk the City of San Antonio losing the NCAA Final Four basketball tournament which it is scheduled to host in 2018.

In September, the Stonewall Democrats of San Antonio presented Patrick (in absentia) with their Genitalia Fixation Award which is given annually to Texas politicians who consistently promote anti-LGBT legislation.

The wording of the Stonewall award says it all. “In recognition of his obsession with protecting people from the sight of chiles in public restrooms and other areas where Johnsons hang out, such as in the Texas Legislature where the biggest Dicks in the state expose themselves each biennium.” Serving cheap shots: Bartender Brett Speer
The issue of trans bathroom usage, which is making headlines not only in Texas but across the country, has given lots of would-be comedians the opportunity to take cheap shots.

One San Antonio bartender thought it would be funny to post a picture on his Facebook page of a bucket with a sign thumb-tacked above it that reads, “transgender bathroom.”

The photo, which started circulating on Facebook on May 17, was posted by Brett Speer, a bartender at Mitchell’s Sports Bar, located at 1923 Lockhill Selma. The image was snapped inside Mitchell’s next to the jukebox near the men’s restroom.

Speer’s bosses did not find the prank to be so funny, telling Out In SA in an email, “Obviously it is insensitive, against policy, and does not reflect the views of Mitchell’s Sports Bar.”

A select month-by-month recap of stories about our community reported here and elsewhere in 2016. JANUARY Rev. Mick Hinson to...