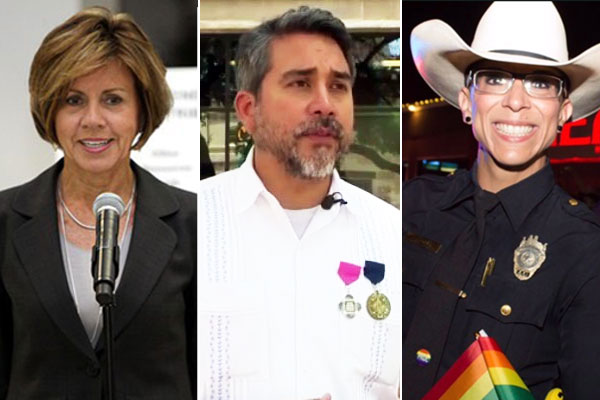 City Manager Sheryl Sculley: A Friend and Ally to Our Community

Whatever real or perceived transgressions City Manager Sheryl Sculley may have committed and led to her resignation, this much is true: She has been a friend to the LGBT community.

Just months after being hired in 2005, Sculley was the highest ranking city official to ever reach out to the LGBT community when she addressed a meeting of the Stonewall Democrats of San Antonio.

At that meeting Sculley invited the LGBT community to join several panels she was creating where citizens could discuss and devise ways to enhance the quality of life in the city. “Change is difficult,” Sculley told her Stonewall audience at the time, “but we all can change to make a better city.”

Sculley hired Police Chief William McManus, an equality-minded leader who went on to improve and enhance the SAPD’s thorny relationship with the LGBT community.

Sculley worked with city attorneys and the Affirmative Action Committee to amend the city’s anti-harassment and discrimination policy to include sexual orientation as a protected classification for city employees. In 2011, she unveiled a budget that included extending domestic partnership benefits to City of San Antonio, CPS and SAWS employees, including same-sex couples.

And who can forget Sculley’s star turn as King Anchovy in the 2009 production of Fiesta Cornyation?

Through a series of small steps, Sculley’s support helped set the stage for the eventual passage of the nondiscrimination ordinance in 2013, and for that we are grateful.

Two of the most highly-visible achievements for San Antonio’s LGBT community this year were the installation of the rainbow crosswalk at the corner of North Main and Evergreen and Pride Center San Antonio’s relocation to a new permanent home in the heart of the gayborhood.

Both of these milestones would not have been possible without the help of District 1 City Councilman Roberto C. Trevino.

The plan to create the rainbow crosswalk originated in the summer of 2017 when Treviño submitted a Council Consideration Request which the City’s Council’s Governance Committee approved as a pilot program on the condition the community would pay for half the cost of the installation.

A fundraising campaign was started in October 2017 but by the end of the year, the effort had fallen short of the goal. The campaign was jump-started in April of this year when Treviño unveiled a Fiesta medal he had designed and which was sold to help raise some of the needed money. The medal sales and additional donations Treviño solicited from businesses and community groups were enough to put the project back on track. The crosswalk was installed in June.

In comments he made to the City Council Treviño said, “The installation of this symbol in the heart of the LGBTQ community shows we are a city with a warm embrace of all of its residents.

When the Pride Center was having difficulties finding a permanent home, Councilman Treviño stepped in and helped move things along. His staff connected the Pride Center with the Metropolitan Methodist Healthcare System which owns an office building on Ogden Street and where a suitable space was available. The building is located just a block from the Main Avenue Strip.

A lease was signed and the Pride Center moved into the building in the spring.

“In these uncertain times, the opening of a safe space in San Antonio was long overdue,” Robert Salcido, Pride Center’s board president told Out In SA. “As the seventh largest city, not having a walk-in facility was no longer an option. It was this that drove the leadership team to build and strengthen relationships across the city over the last couple of years. Of these relationships, Councilman Roberto Treviño connected us to others who shared our vision of a more inclusive San Antonio.”

Sgt. Stephanie Flores: A Liaison Who is One of Our Own

In August, Bexar County Sheriff Javier Salazar unveiled his Community and Internal Liaison Program in which he appointed liaisons to several specific communities within the county. Among the deputies assigned to the program is Sgt. Stephanie Flores who will serve as the sheriff’s liaison to the LGBT community.

Flores is a go-getter who achieved the rank of sergeant just five years after she became a deputy. She is currently Sheriff Salazar’s administrative sergeant for special projects charged with helping him design and implement programs which help promote his goals within the community and with the department’s employees.

Flores is married to Leiana Flores who works as the assistant facilities director for Bexar County. The couple was married in 2014 in Santa Fe, New Mexico and currently live in a downtown condo.

For San Antonio’s LGBT community, having a liaison is an important resource when dealing with questions or concerns relating to the Sheriff’s Office. Having that liaison be a member of our community offers the added assurance we are dealing with someone who can relate to us in a personal way. 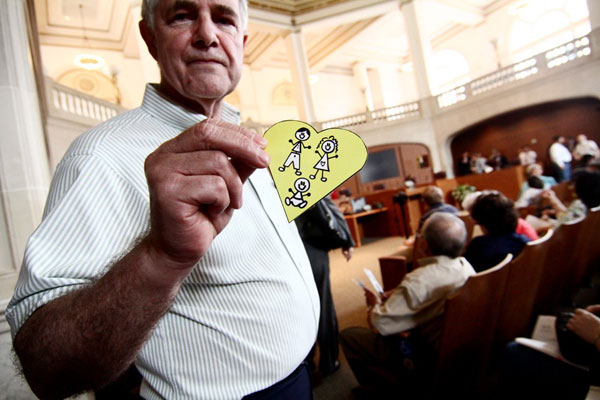 Minister of Hate Foiled by Defeat of Prop A

Pastor Gerald A. Ripley, a Christian extremist and the main organizer of the anti-LGBT Pastor’s PAC, was busy this autumn reaching out to San Antonians “who vote the Bible,” urging them to support Proposition A, one of three amendments to the city charter on the November 6 ballot.

Prop A would lengthen the amount of time to collect signatures for referenda, and reduce the number of signatures needed from 75,000 to 20,000. This would make it easier for special interest groups to challenge ordinances passed by the City Council, crippling its ability to govern effectively.

Prop A was of particular interest to LGBT voters because it offered those who opposed equal rights a vehicle by which they could roll back or deny equal treatment to the community.

Ripley has made something of a career out of opposing LGBT rights in San Antonio. After the city enacted the nondiscrimination ordinance in 2013, he was among those who sought to repeal the ordinance.

In 2011, Ripley organized protests against allowing domestic partnership benefits for city employees, a proposal which passed as part of the city budget with a City Council vote of 8 to 3. At the time, Ripley warned that “Demonic forces are converging over S.A. for the purpose of establishing immorality as a right at the government level.”

In an October letter to his followers, Ripley wrote, “If Amendment ‘A’ passes, it will give a realistic opportunity to undo the 2013 ‘Bathroom Bill’ (aka Non-Discrimination Ordinance) passed by City Council.”

Unfortunately for Ripley, Proposition A was rejected by 54 percent of voters. 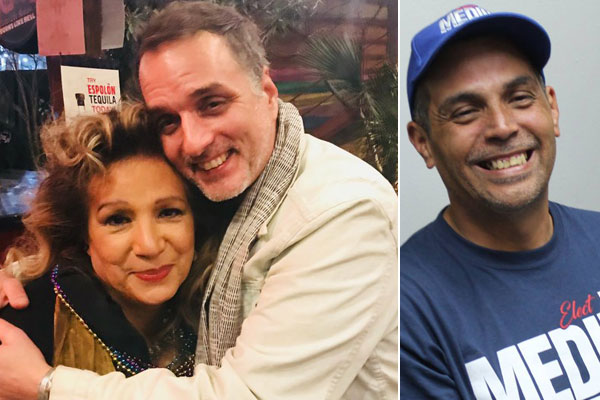 The Rise and Fall of the Bexar County LGBTQI Democratic Caucus

In an effort to convince voters that Manuel Medina, the chair of the Bexar County Democratic Party who was running for re-election, had the support of the LGBT community, three of his party stalwarts created a group and endorsed him.

“That is what took place. We had a meeting, and Garrett and Joan made a motion to endorse Manuel. It was just us three,” Rosales told the San Antonio Express-News. They did not endorse any other candidates. Medina touted the endorsement on campaign flyers he mailed to voters shortly afterward.

The three Medina loyalists had hoped to influence the the Stonewall Democrats of San Antonio, who held their endorsement forum on January 28. However, Stonewall endorsed Medina’s opponent, Monica Ramirez Alcantara, who went on to defeat Medina by garnering 67 percent of the vote.

The Bexar County LGBTQI Democratic Caucus held a few meetings but seems to have faded into the woodwork. Mormando, who is still party secretary, is now part of a group of Democrats dubbed the Manuelistas who appear to remain loyal to Medina, who continues to wield influence behind the scenes as if he were still party chair. 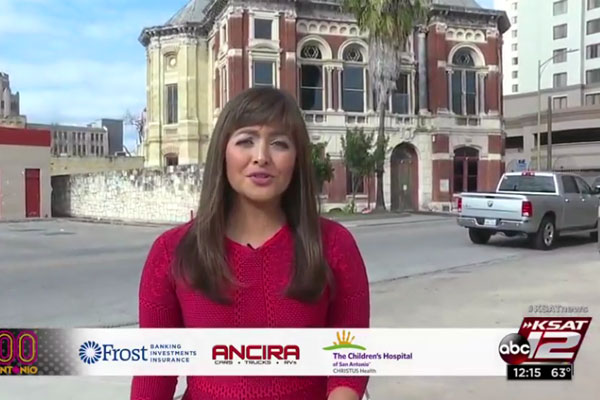 Sarah Acosta in front of the Bonham Exchange. (Video capture)

A December 17 profile of the Bonham Exchange produced by KSAT-TV for its Tricentennial Moments series, failed to mention it was established as a gay bar.

In the segment, reporter Sarah Acosta, details the building’s history as a German health club and as a USO facility but when she describes it’s opening as a night club she never mentions it’s gay origins. Instead, Acosta describes the club as, “an open safe space for all individuals.” This is coded language at best.

On social media, many who saw the segment commented on the omission. “It is an important part of our city’s gay history, they absolutely should have mentioned it,” one Facebook user posted.

It’s hard to ignore the facts:

1) The club was established by Arthur “Hap” Veltman, who was an openly gay real estate developer, restauranteur and nightlife impresario. He died of AIDS in 1988. His longtime companion, Kenneth Garrett, still owns the club.

2) Veltman opened the Bonham as a replacement for a gay bar he previously owned, the San Antonio Country, which was closed after the land and building were sold to real estate developers.

3) The Bonham is home to the Happy Foundation, San Antonio’s LGBT archive that contains decades of research and artifacts collected by curator Gene Elder and others.

Out In SA reached out via email to Acosta and KSAT News Director Bernice Kearney asking why the segment failed to mention the Bonham’s gay lineage.

The magazine received a response from Carlos Hernandez, the producer of the segment who wrote, “Thank you for bringing it to my attention about Bonham Exchange’s history. I understand where you are coming from, but the vignette was focused on the building’s history.”

Hernandez went on to say the station was doing “a vignette on Hap and all his amazing contributions for our city and our LGBTQIA community,” which he said would air during the holidays.

Update Dec. 31, 9 a.m. — We are pleased to report that the segment on Hap Veltman, which began airing today, helps make up for the omissions in KSAT’s previous report.

A select month-by-month recap of stories about our community reported here and elsewhere in 2018. JANUARY MCC SA Pastor Resigns...