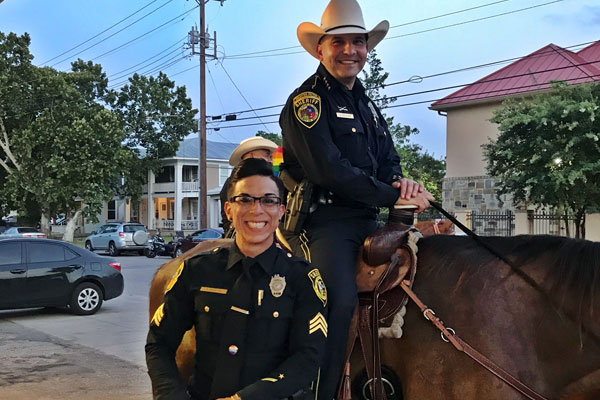 Last month, Bexar County Sheriff Javier Salazar unveiled his Community and Internal Liaison Program in which he appointed liaisons to several specific communities within the county.

Among the deputies assigned to the program is Sgt. Stephanie Flores who will serve as the sheriff’s liaison to the LGBTQ community.

Sgt. Flores is a native of Corpus Christi who attended Angelo State University on a soccer scholarship. In 2004, she moved to San Antonio where she started a successful business as an LGBTQ event promoter. However, by 2010 she had entered the Sheriff’s Academy and was on her way to a career in law enforcement.

Flores is married to Leiana Flores who works as the assistant facilities director for Bexar County. The couple was married in 2014 in Santa Fe, New Mexico and currently live in a downtown condo.

For Flores, the jump from event promotion to law enforcement was motivated by a bit of sibling rivalry. “Event promotion was not something I wanted to do forever but it was something I was very good at,” she told Out In SA. “I got frustrated because my sister is an RN and my family was always bragging about how well she was doing. To them, I was just a partier who worked in nightclubs.” 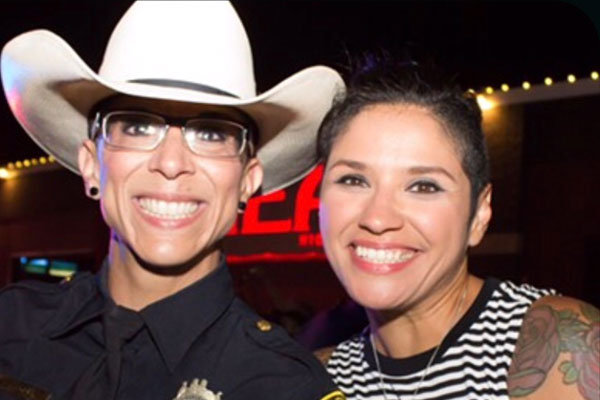 The choice for Flores’ career change was inspired by an acquaintance. “One night, at one of the events I was promoting, I ran into a friend who was a sheriff’s deputy at the time and was working security. There she was in her deputy’s uniform. Just seeing her made me think, ‘Man, if she can do it, I can do it. Why not?'”

Not long after that chance meeting, Flores enrolled in the Sheriff’s Academy.

“To become a sheriff’s deputy you must first become a detention officer,” Flores explained. “You must attend the Detention Academy which is 12 weeks of training after which you get your peace officer’s license. After two years of working in the jail you get the option to go out on patrol. I achieved the rank of sergeant within five years.”

Currently, Flores is Sheriff Salazar’s administrative sergeant for special projects charged with helping him design and implement programs which help promote his goals within the community and with the department’s employees.

Recent programs include one for local youth called “A Day In the Life of an Inmate” that shows the stark reality of what it’s like to be incarcerated; a therapeutic dog program for inmates; and a medals award program for deputies who have gone above and beyond.

As the LGBTQ liaison, Flores is starting to make the rounds of local organizations, introducing herself to the community. She will be attending the National Coming Out Day celebration on October 13 at the Mission Marquee Plaza and the Pride Families Trunk or Treat event at the Pride Center on October 28.

Flores says she’s available to speak to members of the community who may have questions or concerns relating to the Sheriff’s Office or who would like her to attend a local event. She can be reached by telephone at (210) 335-5117.

For Flores, her career with the Sheriff’s Office has become a source pride for herself and for her family. It’s a job she pursues with continued fervor. “I plan to stay here until I retire and am testing for lieutenant in November,” she confidently told Out In SA.

The San Antonio-based Zombie Bazaar Panza Fusion Dance Troupe is hosting an event on October 19, Danza Revolución, that will...