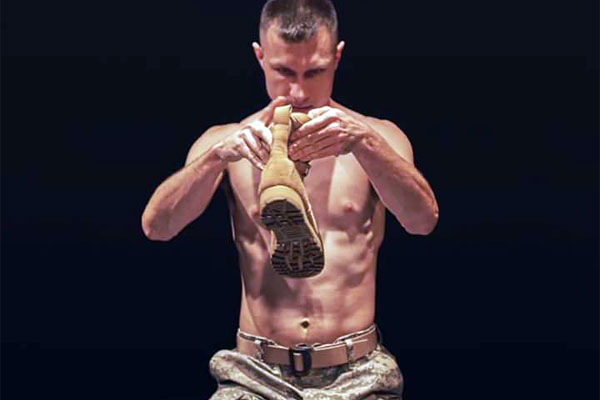 Zach Lewis in "9 Circles" at the Classic Theatre. (Photos by Siggi Ragnar)

9 Circles, Bill Cain’s 2010 play based on the real-life crimes committed by Private Steven Dale, has made its San Antonio premiere at the Classic Theatre in partnership with the Surround Project.

The play is a heart-wrenching look into the long-lasting psychological effects of war on the minds of young soldiers.

Structured around the nine circles of hell in Dante’s Inferno, the play follows the life of Daniel Reeves from his honorable discharge from the U.S. military due to a “personality disorder” to his subsequent civilian trial for crimes committed while in Iraq.

Unlike Dante’s Inferno however, the main character in this play is left to fend for himself. Having grown up a poor Texas teenager with a drug and criminal background, Reeves enlisted in the U.S. Army in hopes of a better life. The Army was supposed to be his saving grace, yet, in the end, it seems Reeves is just another casualty of war.

One of the central questions raised here is whether the U.S. government has a moral obligation to deny enlistment in the military to members of society who come from unstable backgrounds. Makenzie Jené Hernandez and Zach Lewis in the regional premiere of “9 Circles” at the Classic Theatre.

Directed by Eva Laporte, 9 Circles stars Zach Lewis as the nineteen-year-old Reeves, and Makenzie Jené Hernandez in double roles as a young female lawyer and shrink. The cast includes Torence B. White and Andrew Thornton in multiple roles.

This is an adults-only performance due to nudity and explicit language.

Newly-elected Mayor Ron Nirenberg will make history when he becomes the second mayor of San Antonio to participate in the...