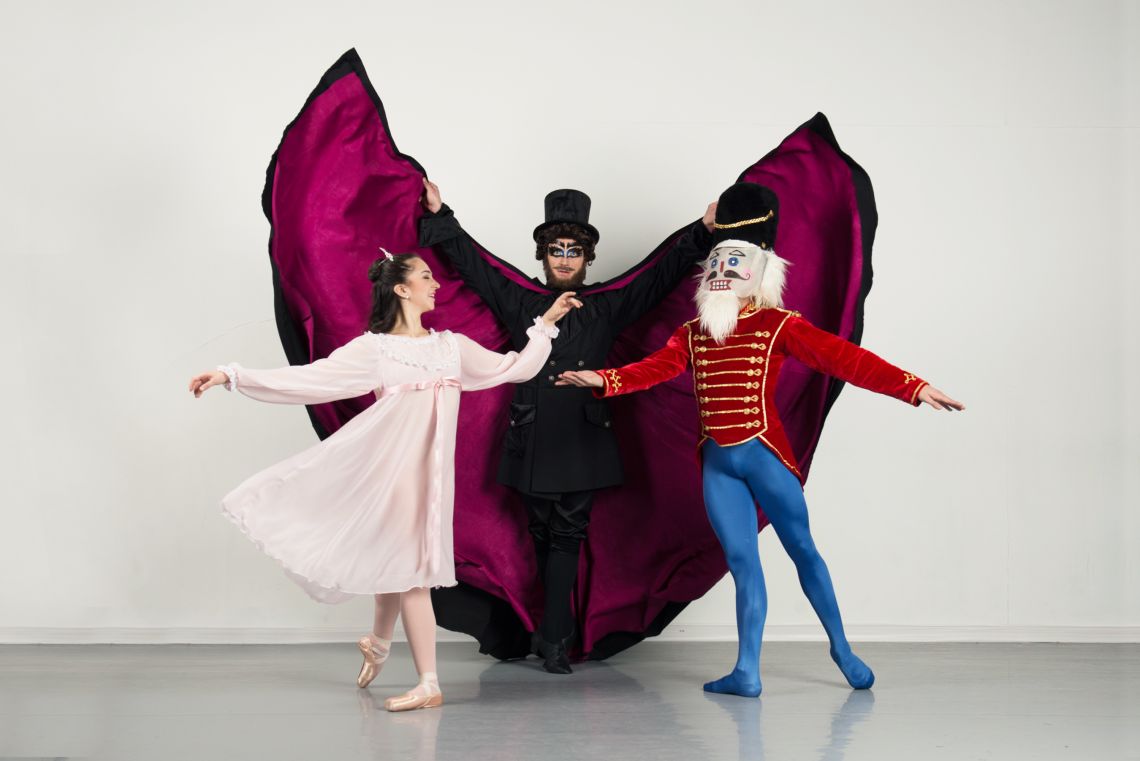 The Nutcracker
In April, it was announced that the San Antonio Symphony would not provide live accompaniment for this year’s production of Ballet San Antonio’s The Nutcracker. We can now breathe a sigh of relief, however, as it seems the two organizations have reached a compromise that would allow the symphony to provide live music for the entire engagement of The Nutcracker. Beginning Thanksgiving weekend, Ballet San Antonio and the San Antonio Symphony (both resident companies at the Tobin) will come together for nine performances that run through December 3. Based on the story by E.T.A. Hoffman, The Nutcracker brings to life the magical tale of Marie and her Nutcracker Prince who travel to the land of sweets where the beautiful Sugar Plum Fairy reigns supreme. As ballet companies across the country struggle for funding and live orchestras become a relic of the past, the opportunity to see the ballet with live musicians is one not to be missed. Choreographed by artistic director Willy Shives (after Marius Petipa and Lev Ivanov), this production brings together the company’s professional dancers with a cast of 100 local children. $35-$114, 7:30pm Fri, Nov. 24, 2pm & 7:30pm Sat, Nov. 25, 2pm Sun, Nov. 26, 7:30pm Thu, Nov. 30, 7:30pm Fri, Dec. 1, 2pm & 7:30pm Sat, Dec. 2, 2pm Sun, Dec. 3, Tobin Center for the Performing Arts, 100 Auditorium Circle, (210) 223-8624, tobincenter.org. All Is Calm: The Christmas Truce of 1914
As the country heals from one of the most divisive presidential elections in modern history, The Playhouse will present Peter Rothstein’s musical All Is Calm: The Christmas Truce of 1914. Based on actual events that took place during World War I, All Is Calm tells the story of the English and German soldiers who emerged from their trenches into no man’s land on December 24, 1914. There, the soldiers exchanged gifts, sang Christmas carols and buried their dead. It was an unofficial Christmas truce frowned upon by officers, but one in which thousands of soldiers partook. Although the war would resume the following day and continue until the general armistice of November 1918, for the surviving soldiers, the Christmas truce of 1914 would be remembered as nothing short of miraculous. $20-$35, 7:30pm Friday-Saturday, 3pm Sunday, Nov. 24-Dec. 24, The Playhouse, 800 W. Ashby Pl., (210) 733-7258, theplayhousesa.org. Las Nuevas Tamaleras
After the passing of her mother, playwright and director Alicia Mena was moved to write Las Nuevas Tamaleras, a play that honors her mother’s legacy and preserves her family’s rich cultural traditions. Since its premiere in 1990 at Houston’s Latino Playwright Festival, Las Nuevas Tamaleras has become a holiday favorite performed around the state. The one-act comedy centers on three Mexican-American women who try their hand at making tamales for the very first time. Things don’t go as planned, however, when the ghosts of the legendary tamale experts Doña Juanita and Doña Mercedes decide to pay the three tamaleras a visit. This year’s production, staged at Our Lady of the Lake University’s Thiry Auditorium, will star Mena as Doña Mercedes and Ruby Nelda Perez as Doña Juanita. The tamaleras will be played by Patricia Zamora, Sonya M. Rodriguez and Kristina Keller. $20-$25, 8pm Friday-Saturday, 3pm Sunday, Nov. 24-Dec. 10, Our Lady of the Lake University, Thiry Auditorium, 411 SW 24th St., (210) 223-2009, lastamaleras.com. The Hip-Hop Nutcracker
A contemporary re-imagining of Tchaikovsky’s classic score, The Hip-Hop Nutcracker features pioneering rapper and producer Kurtis Blow alongside an all-star cast of dancers, a DJ and a violinist. With help from the mysterious Drosselmyer, Maria-Clara and her Nutcracker Prince travel back in time to a 1980s-era Brooklyn nightclub. $39-$59, 8pm Wed, Nov. 29, The Majestic Theatre, 224 E. Houston St., (210) 226-3333, majesticempire.com. Conspirare Christmas
Now in its 25th season, the Austin-based choral ensemble Conspirare returns to the Tobin for an evening featuring holiday favorites and original tunes. Under the direction of Craig Hella Johnson, the group’s live performances blur the lines between pop, classical and folk music. Their most recent recording, Considering Matthew Shepard, was hailed by the Washington Post as a “brilliant, heartfelt performance.” This year’s concert will feature the talents of “Ameri-Chicana” singer/songwriter and violinist Carrie Rodriguez (pictured). $20-$75, 7:30pm Sun, Dec. 10, Tobin Center for the Performing Arts, 100 Auditorium Circle, (210) 223-8624, tobincenter.org. The Santaland Diaries
Imagine working as an elf dressed in a green velvet outfit at Macy’s department store. That’s the idea behind The Santaland Diaries, the one-man show being presented by The Classic Theater of San Antonio. Based on the essay by David Sedaris (originally read on NPR’S Morning Edition in 1992), Santaland Diaries recounts Sedaris’ real-life experiences as his alter ego, the disgruntled Crumpet the Elf, one unfortunate holiday season. The Classic Theater’s production is directed by Kelly and Bart Roush and features John Stillwagon as Crumpet the Elf. $25, 8pm Friday-Saturday, 3pm Sunday, Dec. 8-17, The Classic Theatre of San Antonio, 1924 Fredericksburg Road, (210) 468-3900, classictheatre.org. The Great Russian Nutcracker
For 25 years, the Moscow Ballet — an American company that hires Russian dancers — has toured its production of The Great Russian Nutcracker around the country. While the basic structure of The Nutcracker story remains unchanged, many of the dances and characters in this production are a bit different from the more traditional versions. The ballet employs the talents of local children (who perform as mice and party-goers) but its main character, Masha (aka Marie) is played by an adult ballerina. Noticeably absent is the Sugar Plum Fairy, who is replaced by Masha and her Nutcracker Prince as they perform the grand pas de deux in one of the final scenes. Among the the most striking elements in this production are the painted backdrops created by La La Land set concept designer Carl Sprague. $52.25-$126.25, 3pm & 7pm Tuesday-Wednesday, Dec. 26-27, The Majestic Theatre, 224 E. Houston St., (210) 226-3333, majesticempire.com.