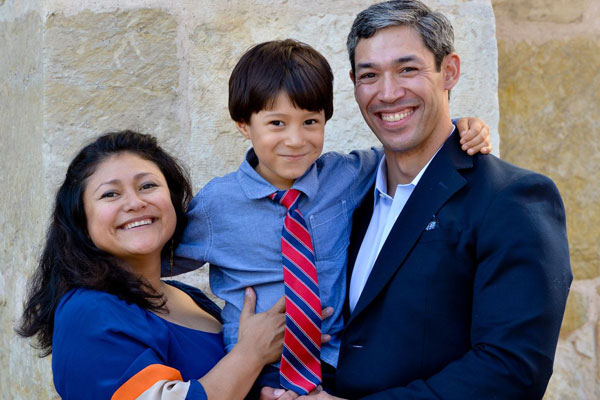 Mayor Ron Nirenberg has been named a Grand Marshal for the Pride Bigger Than Texas Parade. His wife Erika and son Jonah have been named Spirit Marshals for the event. (Photo: VoteRon.com)

Newly-elected Mayor Ron Nirenberg will make history when he becomes the second mayor of San Antonio to participate in the Pride Bigger Than Texas Parade, which this year takes place on Saturday, July 1.

James Poindexter, board secretary of Pride San Antonio, told Out In SA Nirenberg has been named a Grand Marshal for the parade. His wife, Erika, and 8-year-old son, Jonah, have been named Spirit Marshals for the event.

Two other Grand Marshals were named earlier this month. Eight-year-old Joe Maldonado of New Jersey, and 18-year old Mack Beggs of Euless, Texas were selected for their trailblazing efforts to help advance the acceptance of trans youth.

Nirenberg will ride on a float with his wife and son along with members of the City Council. As of press time, Robert C. Treviño of District 1, Rebecca Villagran of District 3, Shirley Gonzales of District 5 and John Courage of District 9 had confirmed their participation. Additional council members are expected to confirm in the coming days.

Poindexter says this year’s parade will have the largest number of local dignitaries ever. He explained that in past years, invitations to participate were often ignored by the City Council and others. Since Castro marched in 2009, the number has slowly climbed as local politicians have become more comfortable with supporting the city’s LGBT community.

The defeat of Mayor Ivy R. Taylor by Nirenberg in the June 10 runoff election was widely seen as a victory for San Antonio’s LGBT community. In a speech to supporters on May 21, then-mayoral-candidate Nirenberg said, “We deserve a city that treats everyone fairly whether you’re transgender, bisexual, lesbian, gay or straight or whatever your definition, you deserve to be treated fairly by your city government.”

Nirenberg’s appearance in the parade will serve as a victory lap for LGBT voters who almost unanimously supported his campaign.

Pride San Antonio Festival and Parade, Saturday, July 1, 2017. The festival is from 11 a.m. to 7 p.m. in Crockett Park 1300 N. Main. The parade begins at 9 p.m. at 1812 N Main Ave and continues south to Lexington Avenue where it ends. For more information, check out Pride SA’s website.

Taking Gin & Tonic to the Next Level

Gin freaks tend not to think of this bracing spirit in seasonal terms: just as you are perfectly justified in...