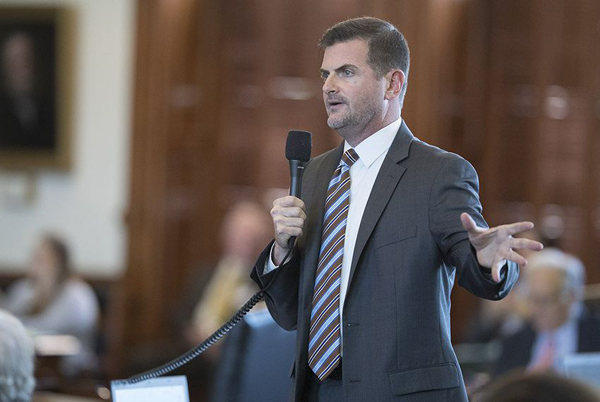 A now-erased provision in Senate Bill 15 explicitly said a potential new state law would not supersede local non-discrimination ordinances. Without that language, many LGBTQ advocates fear Texans could be exposed to some discriminatory employment practices.

What started as seemingly simple state legislation hailed as good for Texas businesses is drawing skepticism from legal experts and outrage from advocates worried it would strike employment protections and benefits for LGBTQ workers.

As originally filed, Senate Bill 15 by state Sen. Brandon Creighton, R-Conroe, would have prohibited cities from requiring that private companies offer paid sick leave and other benefits to their employees. It also created a statewide mandate preventing individual cities and counties from adopting local ordinances related to employment leave and paid days off for holidays. But it made clear that the bill wouldn’t override local regulations that prohibit employers from discriminating against their workers.

Yet, when Creighton presented SB 15 to the Senate State Affairs Committee, he introduced a reworked version — a last-minute move, some lawmakers said, that shocked many in the Capitol.

Among its changes: A provision was added to clarify that while local governments couldn’t force companies to offer certain benefits, business could do so voluntarily. But most notably, gone was the language that explicitly said the potential state law wouldn’t supersede local non-discrimination ordinances.

There’s widespread debate about what the revised language for the bill means. And the new version has left some legal experts and LGBTQ advocates concerned. Axing that language, they say, could undermine the enforceability of local anti-discrimination laws and allow businesses to selectively pick and choose which of its employees are eligible to receive benefits that go beyond monetary compensation.

“You could see an instance where an employer wanted to discriminate against employees who are in same-sex marriages and say, ‘Well, I will offer extra vacation time or sick leave to opposite sex couples, but I won’t offer those benefits if it’s for a same sex couple,” said Anthony Kreis, a visiting assistant professor at Chicago-Kent College of Law.

A spokesperson for Creighton said SB 15 was filed strictly as a response to local governments — like Austin and San Antonio — imposing “burdensome, costly regulations on Texas private businesses.”

“The bill is limited to sick leave, predictive scheduling and benefit policies,” Erin Daly Wilson, a spokesperson for the senator, said in a statement to The Texas Tribune. “The pro-business climate in Texas is something we have worked hard to promote, and need to protect.”

Unlike 21 other states and the District of Columbia that have some sort of employment protection for LGBTQ workers, Texas’ statewide employment discrimination laws don’t explicitly protect LGBTQ employees. Neither does federal law. Since proposed bills to enact such a measure at the statewide level haven’t had any luck in the GOP-dominated Legislature, local ordinances often serve as some of the only protections for LGBTQ workers at the local level, said Cathryn Oakley, a state legislative director and senior counsel for the Human Rights Campaign.

“If these ordinances are so hollowed out by the SB 15 substitute that they’re not meaningful employment protections anymore, that’s going to have a huge impact on folks in Texas who rely on these ordinances to keep themselves and their families safe,” Oakley said.

When asked to address the fears of groups like Oakley’s, Creighton said that “private businesses are best equipped to determine what benefits they can provide to their employees.”

“Senate Bill 15 addresses local governments placing burdensome regulation on private employers and creates a patchwork across the state, therefore it is purely a jurisdictional issue,” he said.

Still, lawyers are sounding the alarm even though Creighton’s bill doesn’t explicitly mention the protection of local employment protection laws already in place.

“When it comes to non-discrimination ordinances, ‘terms of employment relating to’ various benefits and scheduling practices are as integral as decisions relating to hiring, firing and promotions,” said Dale Carpenter, a Southern Methodist University constitutional law professor. “While it’s true that [the bill] should not be read to preempt local ordinances forbidding discrimination in hiring, firing and promotions, employment practices encompass a wide range of benefits.”

And, legal experts question: If Creighton’s intention is to make sure local non-discrimination ordinances aren’t gutted under his bill, why was the language removed in the first place?

“The fact it was removed and there’s an unwillingness to put it back in even though there’s concerns about that, suggests to me there’s an intent to discriminate — it isn’t some kind of inadvertent oversight,” Kreis said.

Lt. Gov. Dan Patrick has made the legislation a priority this session and denied that there’s an attempt to discriminate — or that the law would even impact ordinances protecting workers.

“Senate Bill 15 is very specific. It doesn’t change the law one way or another regarding [non-discrimination ordinances],” a spokesperson for Patrick said when asked about the potential for employment discrimination under the revised language for the bill. “Anyone who is desperately in search of an issue in order to engage in political theatre won’t find it in this bill.”

Creighton’s SB 15 sailed out of the Senate State Affairs Committee and could get be debated on the upper chamber’s floor as early as this week. Meanwhile, the House is moving slower on the matter — it’s companion bill has yet to go before a committee. So the lower chamber’s version still includes the language protecting local non-discrimination ordinances. State Rep. Craig Goldman, R-Fort Worth, who’s authored the lower chamber’s companion measure did not respond to request for comment on the revised version of Creighton’s bill.

The business community has also maintained that the bill’s intent isn’t to hurt employment protections put in place by Texas cities. Annie Spilman, the state director for the National Federation of Business, insisted that SB 15’s aim is to simply set a uniform set of employment laws for all employers in the state. She said the business community is “not trying to interfere” with any non-discrimination ordinances and that the removal of the clause was likely “an oversight.”

“We’re probably going to have to amend this bill several times,” Spilman said.

Disclosure: Southern Methodist University has been a financial supporter of The Texas Tribune, a nonprofit, nonpartisan news organization that is funded in part by donations from members, foundations and corporate sponsors. Financial supporters play no role in the Tribune’s journalism. Find a complete list of them here.

For the second time in two years, the Stonewall Democrats of San Antonio have endorsed Ron Nirenberg for Mayor of...