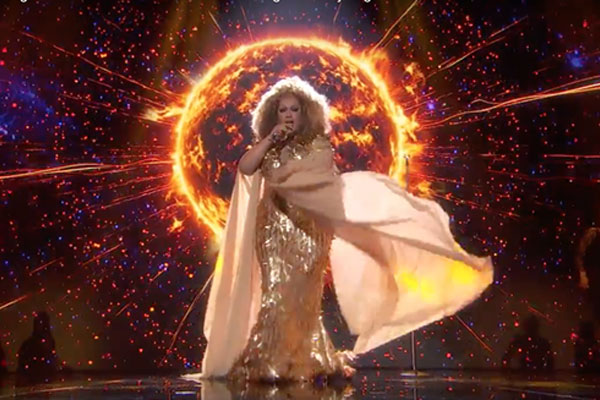 We’ve got some pretty mixed feelings over here, y’all.

America voted. Unfortunately, they didn’t vote for Ada Vox to make it to the top seven on this season of American Idol.

If you haven’t been keeping up with the singing drag queen from San Antonio Ada Vox, who’s been SLAYING every one of her performances since her first audition on the newly revamped American Idol. Here’s a quick recap of her time on the show:

Adam Sanders, better known as Ada Vox when in full drag, made it through the grueling rounds auditions and performances during the notoriously intense Hollywood Week. A few weeks ago, she destroyed her cover of Radiohead’s “Creep” and left us completely gagged. Next came her incredibly powerful rendition of “Feeling Good” by Nina Simone, which brought judge Katy Perry to her knees. Sunday, April 15, the South San High grad sang a duet with Glee’s Lea Michele as part of the top 24 duets portion of the contest, which ultimately secured her a spot in the top 14.

Last Sunday, Ada strolled out in a dramatic, raven-like ensemble combining black feathers, silver fringe and rhinestones fit for the likes of Diana Ross and decimated the audience with her rendition of “The Show Must Go On” by Queen. This past Monday, even though this fierce queen wasn’t voted through to the next round by American Idol viewers, Ada Vox was given a chance to redeem herself and sang a extraordinary cover of Jennifer Holliday’s “And I Am Telling You I’m Not Going,” and was saved by the judges who automatically put her into the top ten.

Last night, Ada showed us even more of her vocal range and overall stardom bringing down the house with a commanding and dare I spiritual (I mean, she did take us to church) rendition of The Lion King’s “The Circle of Life” whilst donning another vintage soul queen ensemble – this time with gold chains and a bronze hair as majestic as Mufasa’s mane. Without getting too much into her outfits, let’s just say Miss Ada has been serving vintage soul-queen LERKs and they are WERKing for her in every possible way (see her raven cloak ensemble from two weeks ago).

“You have never let us down,” says Lionel Richie, fighting the roar of the crowd. “Listen, I want to say you – you have to know how special this is to have you on this show. You are a movement unto yourself. I am telling you, I’m so proud of you, keep it up my dear, it’s fantastic.

“I remember your very first audition,” says Katy Perry. “You dropped the mic then, you keep dropping the mic now, but we did talk about making sure it wasn’t a shtick that it was really authentic, and tonight I feel like your really embodied Ada Vox.”

Luke Bryan also commented “You know, getting to sit with Idina [Menzel] and her telling you some of those tricks that you need to hear with the subtleties of your voice – ‘cause you have the voice that can take our head off the whole time – but hearing you take that more subtle route and just milk the song, and make it happen was so great … the first time I’ve really seen you capture that on the show thus far.”

With all the continued praises from the judges since the beginning of the competition, the only way to continue onto the the top seven would’ve been to capture America’s vote, which unfortunately, Ada wasn’t able to do.

But, it’s not that Ada Vox wasn’t aware of that this whole time. “I’m not sure that the majority of America is ready for someone like me to be on that platform of saying that I am the next American Idol,” said Ada Vox in a recent interview with The Advocate. “But what I do know is that there is a big part of America that is ready to accept me into their hearts. It’s the people that love what I do that are the reason that I do what I love.”

And the story of Ada Vox is far from over, with shout outs from RuPaul herself, and the continued support from Vox’s fan base that is continuing to sky rocket, this South San High School graduate already has all she needs to build a strong musical career and we’re looking forward to watching it explode.

Volunteers with Pride San Antonio have spent the past few weeks planning and executing the design of their float in...