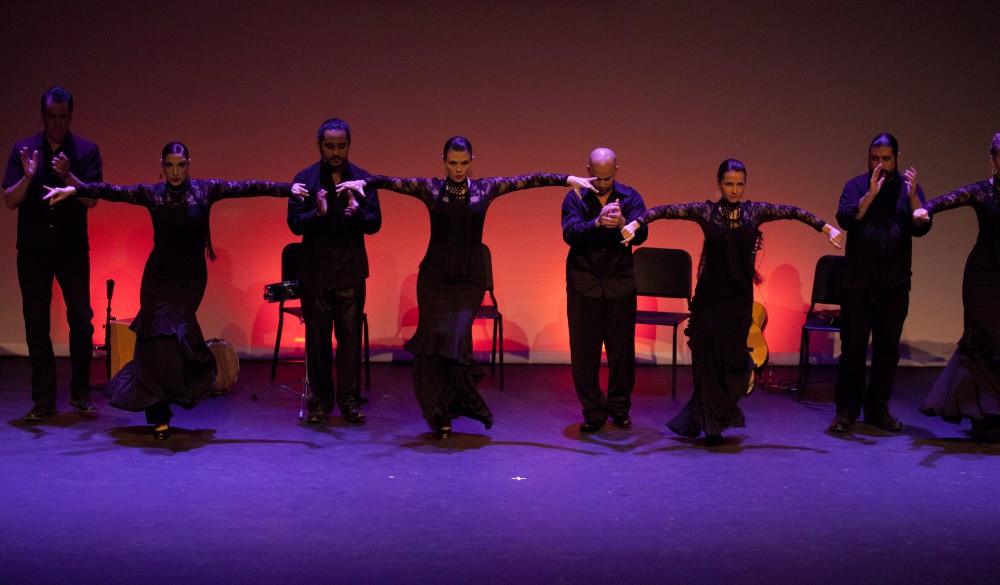 January 10  and 11, Austin-based A’lante Flamenco will debut “Prophecies” at the Carlos Alvarez Studio Theater in the Tobin Center. Set to flamenco choreography, “Prophecies” is a modern-day adaptation of Kahlil Gibran’s classic prose poem “The Prophet.”

I spoke with Olivia Chacón, choreographer and artistic director of A’lante Flamenco, who shared her vision and enthusiasm for this latest production.

“The Prophet is a book I remember from college. It was written in 1923 but it’s had many different lives,” Chacón said. “So that was something that was always in the back of my head for many years now, and so finally, we just got the opportunity last year to put this piece together.”

“Prophecies” reimagines Gibran’s prophet in a contemporary setting, facing such dilemmas as cell-phone and online etiquette, but its music and choreography are an exploration of the past– something Chacón refers to as “proto-flamenco.”

“We do very few things that are not very firmly rooted in tradition and, in fact, in this piece we go back to some of the oldest flamenco music, some things that are very obscure, that people no longer hear very much–they’ve grown out of fashion,” Chacón said. For example, the trilla, one of the pieces included in the show, is performed barefoot and often mistaken by audiences as a contemporary dance. “This is a very old song nobody does anymore. Very few people use it, and it was something we wanted to rescue.

“We also have a song that’s a Sephardic song–that’s something that’s at the root of flamenco music. You know, flamenco came from this combination of Muslim and Jewish and European influences, all mixing up at the same time in the same place. So we’ve tried to kind of dig down a little bit.”

Chacón believes staying true to flamenco’s roots should not limit the performers but should be used as a means to achieve a goal. “For me, my main goal is to use flamenco as a language, as a medium to tell a story, or to express myself. So, however I need to do that, I’m going to get it done,” she said. Here, Chacón’s determination and boldness shine through. “Although were always based in tradition, my teachers thought me that if you’re not being yourself, and you’re not adding something new, there is no reason to present your work. You never want to be a copy of anyone else.”

Chacón, along with her husband, Isaí Chacón, A’lante Flamenco’s musical director, has been a regular performer in San Antonio for years, often appearing at Carmen’s de la Calle Café on weekends. It was here that I first became acquainted with Chacón’s dancing. It can be aggressive, sharp, and downright emotional.

As a dancer, Chacón’s list of accomplishments is impressive.  In 2006, she decided she wasn’t “gonna mess around with day jobs” but would fully commit herself to flamenco. She moved to Madrid, where she studied at the prestigious Amor de Dios Centro de Arte Flamenco. “There, I was able to study with many amazing artists and just spend my whole day, almost every day for almost four years, just studying flamenco and performing,” she said. Eventually, she would be invited to join the company of Cristóbal Reyes–the uncle of Joaquín Cortéz, one of flamenco’s most famous dancers. She spent two years in the company, traveling through Spain, Mexico, and Cyprus.

“Honestly, it was very, very, hard. It was wonderful, but it was very tough, and a lot of people think I was just on vacation–but no. It was a lot of blood, sweat, and tears, and very difficult work, and it was really when I made myself a dancer,” she recalled. “I was just dancing every day, and trying to get by, and trying to just gain new experiences all the time.”

She returned to Texas in 2010 and founded Flamencura Music and Dance Studio, Austin’s first dance school dedicated to flamenco. The following year, she formed A’lante Flamenco Dance Ensemble, taking the group across Texas as they performed in their first production, The Red Shoes: A Flamenco Fairy Tale. In 2014, A’lante Flamenco received the Austin Critic’s Table Award for Best Dance Ensemble for “Prophecies,” which the group performed during a five-night stint at Austin’s Long Center.

Now, A’lante Flamenco is ready to take “Prophecies” on the road, bringing it to a San Antonio audience that Chacón considers as “very informed.” “To take it to San Antonio, which is my hometown, is very exciting to me, and a little bit stressful, because San Antonio has such a strong flamenco community, and I think even beyond the community, the population generally has such a great appreciation not only for flamenco, but also for dance and for music,” she said.

Indeed, flamenco has had a considerable presence in San Antonio, with a history that goes back to the first half of the 20th Century. “In many places, especially in places that don’t have as much Hispanic culture, people don’t even know how to say the word, they’ve never heard of it, they don’t know what country it’s from,” she said. “So I think the connection that San Antonio has with Hispanic arts and culture has helped flamenco grow there. And people like Bertha Almaguer, from back in the 30s, who instituted the Spanish dance programs at the Parks and Recreation Department, that’s been a huge help. Families like the Champions, the Linares family, have really kept that tradition going strongly, and we’ve never had any group like that here in Austin.”

A’lante Flamenco is also preparing for their next project, Desplazados which is inspired by the current political debates around immigration reform. “Each one of our members has their own story about immigration, or even just displacement, within their own community, and so that’s what Desplazados is about,” Chacón said. It continues the company’s mission to use flamenco to tell stories and spark dialogue. Desplazados debuts in April, with plans to bring it to San Antonio in the summer.

A’lante Flamenco comprises 11 permanent members–five dancers and six musicians. The San Antonio performance of “Prophecies” includes a sixth dancer as special guest. Among the members with San Antonio connections are Karen Vilches who grew up in San Antonio, and guitarist Luisma Ramos and vocalist Chayito Champion, both of whom live in SA.

Tickets for “Prophecies” are available at https://www.tobincenter.org/