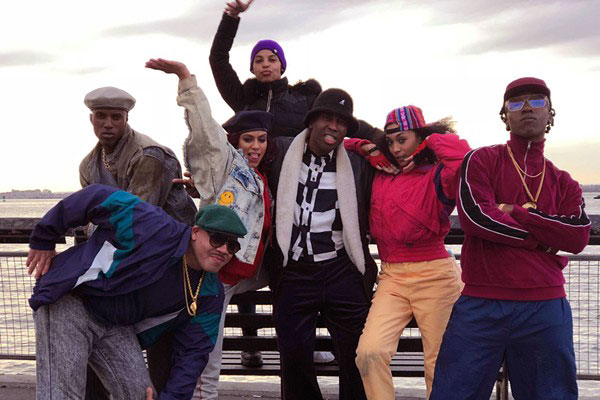 It’s been almost a year to the day since we first mentioned Karma Styles, one of the original members of the San Antonio-based vogue/dance/art collective House of Kenzo. Karma moved to New York City in 2015 to pursue his dreams as a dancer.

Born Charles Wilborn, Karma graduated from Communications Arts High School at Taft in 2008 and shortly after landed a gig with the Harlem Globetrotters, which took him dancing across the U.S. for four years. Shortly after returning to San Antonio, the dancer connected with a few other dancers that would eventually become the first inception of House of Kenzo (who now get booked regularly at festivals like SXSW and Day for Night).

Before House of Kenzo began blowing up, Karma moved to New York, originally to learn how to teach yoga. That didn’t work out, but Karma had already moved, so he figured he’d try to make it work as a dancer.

And we’ve been cheering him on since.

From dancing for Lil Mama to landing Nike and Alexander Wang X Adidas ads, Karma has tirelessly pushed to actualize his dreams as a dancer.

Recently, the San Antonio-born dancer was featured in the new Ryan Murphy (Nip/Tuck, Glee, American Horror Story) show Pose, which takes place in 1987 during the initial AIDS crisis. Similar to Paris is Burning, a documentary that chronicled the mid-to-late 1980s Harlem ball culture in New York City (and the black, Latin, gay, drag queen and transgender communities involved in it), Pose goes steps further and highlights the unique struggles of QPOC in the late ’80s, as well as the discrimination transgender women (especially transgender women of color) experience from cisgender, gay, white males.

“Ryan Murphy is on set right there with you,” Karma told the Current over the phone. “I’ve worked on a lot of different sets and sometimes you don’t even get to to talk to the director – but he’s very hands on. It was cool to see him in action and working right there with us, in the cold, seeing the scene, putting it together, seeing his vision and just talking to us, and giving us [direction].”

Karma explained that on many sets that he’s been on, a lot of the extras get “hushed,” and aren’t really allowed to talk very much; a really strict sort of atmosphere. He explained that he thought it would be similar experience since this was going to be one of Murphy’s productions. What Karma found was the opposite.

From the actual stars on the show, to the extras dancing in the background, to the consultants on the show (some of whom worked on or were in Paris is Burning), Karma says he felt that Murphy and the show did a good job of making sure the NYC ballroom scene past and present was welcome and that the history was treated with respect.

“[Murphy] seemed really honored and happy to meet us and have us on the show. It was cool to see someone appreciate us and not use us – like he wants this to actually look legit and put [the ballroom community] in a good light.”

For many kids, the beginning of a new school year sparks nervous excitement. For trans students and their parents, however,...