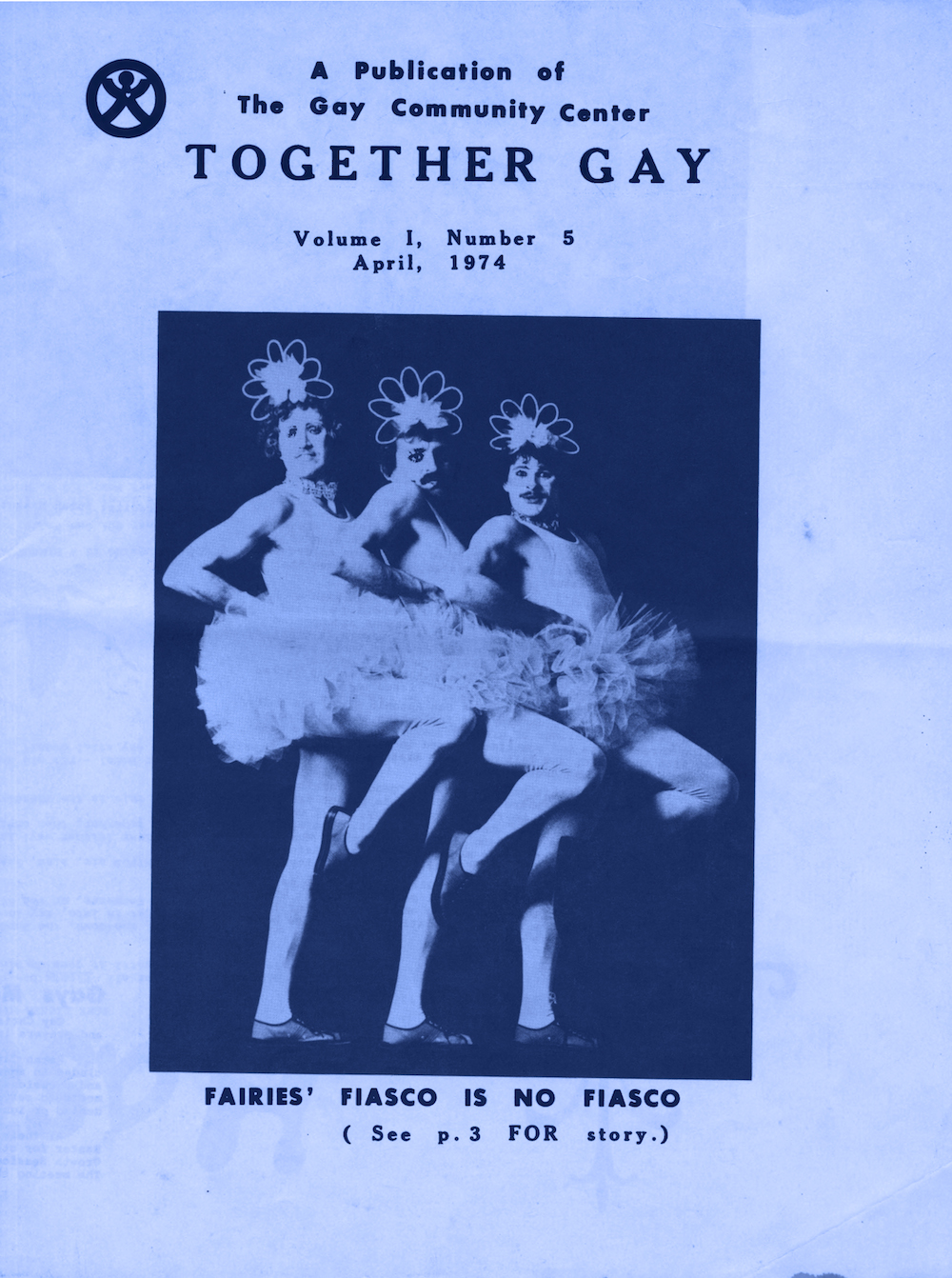 San Antonio has had many queer publications over the decades, some lasting only a few months, others having remarkably long runs.

This 1974 issue of Together Gay, a publication of the San Antonio Gay Community Center, provides an interesting example of how some queer San Antonians creatively responded to the challenges they faced. Gene Elder, owner of the San Antonio Country (an iconic gay bar known as the largest gay disco in the US during the 1970s) crafted a play spoofing military incursions into queer space and sending out a call for tolerance and solidarity. Fairies Fiasco artistically challenged military harassment of gays and proposed that fairies should be able to gather and frolic wherever they please. The lifespan of Together Gay is unknown as few copies survive.

Queer publications proliferated in San Antonio during the 1980s. The Calendar, produced by the San Antonio Gay Alliance (SAGA) between 1982 and 1987, started off as a diminutive biweekly serial that fit easily into a pants pocket. Those seeking out San Antonio’s queer social scene need only flip to the Calendar’s “Community Directory” to point them in the direction of the city’s thriving nightlife. The Calendar ceased publication in 1987 after AIDS decimated SAGA’s board, taking the lives of eight board members including the serial’s creator, Michael Stevens.

Bar Talk enjoyed one of the longest runs of any of San Antonio’s queer periodicals. Published from 1985 through 2000, provocative photos and illustrations of scantily clad (often nude) males dominated the pages of the publication and content clearly catered to the interests of gay men. Gracie’s gossip column kept readers abreast of the latest goings-on in the River City’s queer quarters.

Alternatives appeared briefly on the shelves at queer establishments in the late 1980s through the early ’90s. The objective of the publication was to “project a professional and positive image” of San Antonio’s lesbian and gay community. Although it was seen by some as a more female-friendly alternative to the Calendar, creators of Alternatives denied any rivalry between the two publications.

Several new queer pubs appeared in the ’90s, two of which were short-lived. River City Empty Closet and Out in San Antonio came out in 1991 and offered San Antonio’s LGBTQ community updates on national, regional, and local news and events. When Out in San Antonio ceased publication at the end of 1991, Randall Sherman and Frank Bara stepped in to fill the gap with the Marquise.

In 1992 the Marquise cranked out its first volume and began connecting San Antonio’s queer residents to the rest of the LGBTQ world. The publication covered news stories from coast to coast and often featured headlines from abroad in its “International News Roundup.” The Marquise tackled issues important to the city’s LGBTQ community: gay marriage, lesbians and gays in the military, hate crimes, queer parenting, AIDS, and anti-gay legislation. While the Marquise did carry advertisements for local gay and lesbian bars, activism and serious news stories supplanted tales of drag divas and bar features so popular in local publications during the 1980s. In 1996, Ted Switzer took over creative control of the Marquise, a task he continued until the magazine folded in late 1997.

As the 1990s wound down, another new queer serial appeared on the horizon. San Antonio Community News enjoyed a brief stint characteristic of so many of San Antonio’s gay publications. Like the Marquise, SACN offered an amalgamation of national, regional, and local news and happenings. 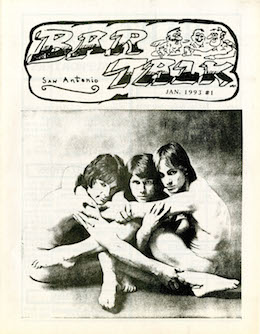 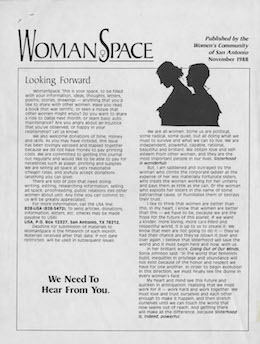 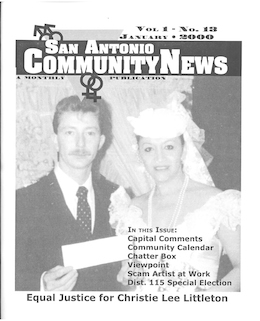 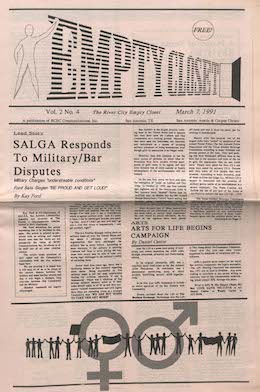 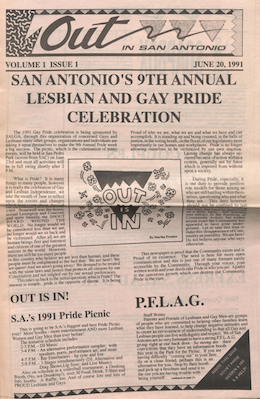 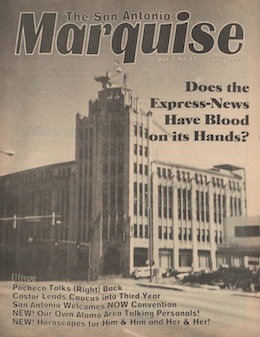 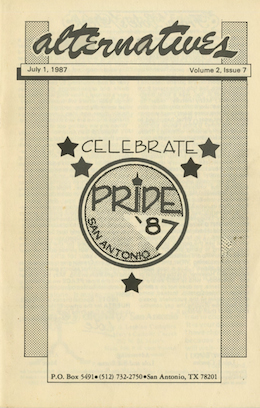 When the millennium rolled in, other queer pubs came and went—there was always at least one LGBTQ serial in production, such as Ignite, to keep queer San Antonians connected and informed. Through partnerships with the Happy Foundation Archives and community members, the University of Texas at San Antonio Libraries Special Collections is working to ensure that these valuable resources will be preserved for future generations. UTSA Special Collections has made many of San Antonio’s LGBTQ publications available digitally on its website. UTSA Special Collections is committed to the preservation of local and regional LGBTQ history and has identified LGBTQ materials as one of its top collecting priorities.

Melissa Gohlke is an urban historian focusing on San Antonio’s LGBTQ history. She is currently working on a book version of her Master’s thesis:  Out in the Alamo City:  Revealing San Antonio’s Gay and Lesbian Past, World War II to the 1990s. Gohlke is employed by the University of Texas at San Antonio in the Special Collections department of the library. Please direct inquiries to [email protected]a.edu.

While the quality of work in San Antonio’s theater community continues to improve, the lineup for the 2014-15 season is...