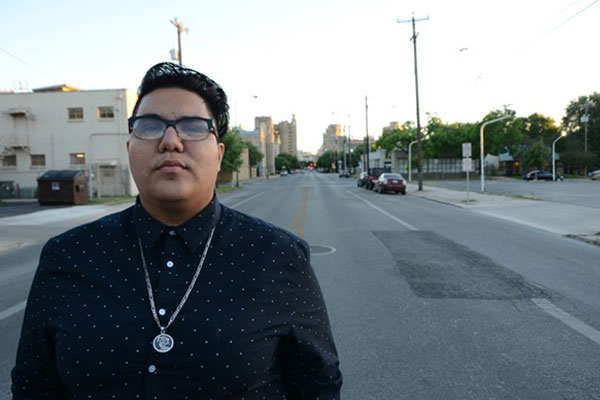 Watching Alyson Alonzo sing is a spiritual experience. When she’s performing at a bar or venue, you can hear a hush wash over the crowd as soon as she releases a string of breathy notes from her lungs. She’s that good. Apparently, she’s been that good for a while.

Alonzo told the Current that when she was 6 or 7, her grandfather knew she had vocal talent and recorded her singing “America The Beautiful.” He played it back to Alonzo’s family as she, not yet being able to stand the sound of her own voice, hid in a refrigerator box in the next room. Eventually, the siren from San Antonio’s South Side started writing her own music, and through the encouragement of an online collaborator she met on Myspace, discovered for herself that she actually could sing.

Alonzo then began working with people in local music community, including Jeff Palacios (who plays with The Foreign Arm and Femina-X) as well as Omar Nambo (who used to play with Piñata Protest). Eventually, the singer invested in a loop station and began programming and looping her own beats live on stage, crafting a fascinating blend of electronica and neo-soul.

After several years of playing solo gigs, including a slot at last year’s Maverick Music Festival two performances with Youth Orchestra of San Antonio where she slayed covers of Radiohead and Prince, Alonzo has released a long-awaited solo debut she’s calling The Romantic EP.

The EP is sexy from the start, as the first track “Love Memory” opens with Alonzo singing “I crave a love so deep the ocean would be jealous.” The bass-driven opener walks listeners down a corridor of synth pop keys and hip-hop inspired beats as Alonzo exhales lush vocal runs over the music. It’s raw and so intimate the chismosas will definitely wonder, “Damn girl, who was that about?”

The rest of the tracks on the EP are as solid as the first, but “Your Return” sticks out — a looped beat-box track that braids together echoing vocal harmonies as Alonzo croons about dishonesty and heartbreak in relationships. It’s definitely got that Toni Braxton “Unbreak My Heart” edge to it, a song that will leave you thinking about your own love life.

Though 30-year-old artist doesn’t have a record release show scheduled yet, the EP’s available on Spotify, Google Play and Apple Music.

Originally published in the San Antonio Current. From its early days in the Blue Star Arts Complex to its stint...