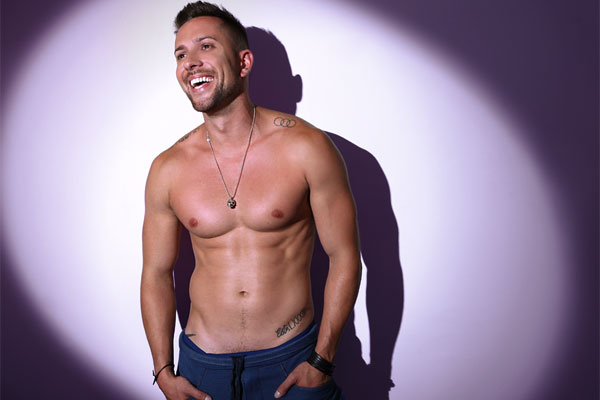 The San Antonio AIDS Foundation’s Webb Party returns after a one-year hiatus on April 21 at the Bonham Exchange with the 80’s theme, “Reboot,” and a live entertainment roster headlined by American Idol alumnus David Hernandez. An enthusiastic participant at the 2015 Webb Party (Party photos by Julian P. Ledezma)

As one of SAAF’s signature fundraising events, the Webb usually attracts over 1,500 guests and helps raise over $100,000 annually for SAAF’s client services including free HIV testing and hot meals program.

“All of us are dedicated to making Webb an unforgettable extravaganza that will not only raise money for the San Antonio AIDS Foundation, but also raise awareness of the fact that HIV/AIDS remains a serious public health problem in our community and that we must continue to fight the good fight. Webb is a perfect way to both educate and entertain,” SAAF CEO Cynthia Nelson said in a press release. First held in the early 1990’s, the fundraiser’s popularity has spurred its growth over the years and in 2004 WEBB became an official Fiesta event. According to local legend, the Webb’s name is inspired by an Ethiopian proverb: “When spider webs unite, they can tie up a lion.” On the main stage

David Hernandez gained national attention with his powerful voice and affable personality during the seventh season of American Idol where he emerged as a finalist. On his American Idol “Fast Facts” page, he cites musical influences as: Stevie Wonder, Donny Hathaway, Alicia Keys, Anthony Hamilton, Michael Jackson and Peabo Bryson.

Hernandez recently starred in the national and international-tour of Ballroom With A Twist, which is a spinoff of TV’s hit show Dancing with the Stars. His appearance at the Webb Party will mark his second time in performance at the Bonham Exchange, where he took the stage last November.

The singer, who recently came out as gay, talked to Out In SA about his journey toward self acceptance and his latest music video, entitled “Beautiful.”

Congratulations on your recent coming out. Would you say your fears about coming out publicly were unwarranted and do you regret not coming out sooner?

I don’t think my fears were unwarranted – I think everyone comes out on their own time. I had a really different kind of childhood – I grew up in a Mexican American family that was very religious. A lot of the things I talk about now really weren’t acceptable to talk about growing up like that. I had girlfriends, I went to college, I was signed to a label where I did the photo shoots with the half-naked girls and sang the songs I didn’t really want to sing, all because I had a dream of doing what I do now for a living. I was willing to do anything possible. I didn’t want to sacrifice my career just because…well, I didn’t want to be who I was because I thought it was going to sabotage my career. Fast-forward ten years later and we are living in a whole different time now. Ten years ago, we weren’t as progressive as we are now with equality. So that’s how things unfolded for me but I don’t really regret coming out sooner because everything happens as it’s suppose to.

It’s been about 8 years since you last appeared on American Idol. You were on season seven of course, with David Cook and David Archuleta and perhaps the biggest break-out star that season – Danny Noriega (aka Adore Delano). Do you still keep in touch with anyone?

Yeah I love Danny – we text occasionally. I call him Danny because that’s how I originally met him. I’m super proud of him – he’s an incredible person and an incredible singer. I’ve always thought that. We had a friendship on the show and then he went on to do his thing and I went on to do mine. I watched the recent season of RuPaul’s Drag Race All Stars and I shot him a text – all is good. We have a tight knit family within the Idol community because there are not a whole lot of us that have been through this experience.

Talk about the concept behind your new single and video “Beautiful.”

Honestly, when I first heard the song I just fell in love with it. I just thought it was a great concept and it was positive. With everything going on in the world, I felt it was a song that could inject some light and positivity. We see all over the news about people dying – and all the negative news – so when I heard the song and recorded the vocal, I immediately had an idea for the video with a buddy of mine. Originally, the video was going to be shot with everyone being completely naked…But we refined it a bit and it actually came out better than I originally thought. We wanted to show the love that the couples had for each other, and the self-love. All these people in the video have overcome these different struggles and you didn’t need them to be naked to show that.

How do you relate to the song personally?

I relate to it so deeply because growing up and stuff, my parents divorced when I was two. I lived with my mom till I was about seven and then I lived with my dad. I had siblings and stuff, but there was always this constant need for solid ground. I don’t think that I’ve even found that yet, even now into my adulthood. It’s always been a struggle with my sexuality and my confidence, my self worth, and my image, you know. When people see pictures and stuff, I’m giving you my best angles. When you see me in real life, I’m not what I look like in those pictures – most of us aren’t. People have this idea that you should be perfect because you’re in show business or you’re an entertainer but the truth is that I’m not. I get picked apart on social media. You know, some of those things I’m really insecure about – people comment about it on YouTube. It’s like what!? I’m human! For me, this song is just an affirmation for feeling beautiful….

What’s your definition of beautiful?

It’s in the eye of the beholder – whatever you think is beautiful – different sizes and preferences. I mean that’s why I always laugh when I see “sexiest man alive” on the cover of a magazine. Who decided these things? It kind of baffles me. I mean, beautiful for me is intellect. If you want to get me to go on a date, take my mind in a fucking circle and make me think about things – give me some good conversation. I think beauty extends a lot deeper than just your appearance.

San Antonio AIDS Foundation Webb Party, Friday, April 21 from 7:30 p.m. to midnight at the Bonham Exchange, 411 Bonham Street. General admission tickets are $75 pre-sale (at the Fiesta Store or online at the SAAF website ) and $90 at the door.

Check out our slideshow from the 2015 Webb Party.

Originally published in the San Antonio Current. The first-ever Pride parade to be held in Corpus Christi will take place...