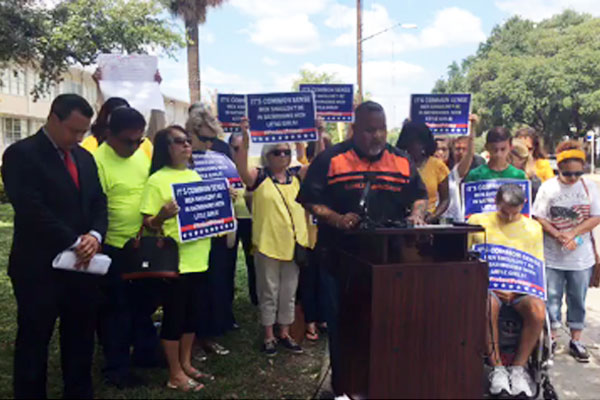 The anti-LGBT group Texas Values is protesting changes made on August 21 to the nondiscrimination policy of the San Antonio Independent School District which now includes protections for sexual orientation, gender identity, and gender expression.

Jonathan Saenz, the president of Texas Values, was the featured speaker at a protest rally with about 15 people in front of the SAISD’s Burnet Learning Center on September 11, ahead of the district’s school board meeting later in the evening.

“Many people in San Antonio feel the school board did not ask them what their opinion was about the issue, did not bring them into the discussion,” Saenz said at the rally. “Instead they fast-track a policy that anytime this policy comes up it has been a part of controversy . . . The parents were not given consent. They did not participate in the drafting of this policy and from what we understand discussion of this policy had been going on behind closed doors for quite some time.”

Also present was Charles Flowers, senior pastor of the Faith Outreach Center, who in 2007 was charged with dragging a 15-year-old girl behind his van at a Christian boot camp run by him and his wife.

In an August 24 blog posting, Saenz blames Texas House Speaker Joe Straus and Chairman Byron Cook for the failure to pass the so-called “bathroom bill,” a state law which would have regulated bathroom use for transgender Texans. The result, says Saenz, is school districts taking the matter into their own hands.

“Texas leaders were warned that this is what would happen if the Texas House was not allowed to vote on this issue,” Saenz says in the blog. “The liberal LGBT left wasted no time in implementing a new policy with little opportunity for the public to weigh-in. Now it’s time for San Antonio parents who are blindsided by this to call their school board members and request a chance to be heard.”

“Texas Values uses fear and hate against transgender people,” Chuck Smith, executive director of Equality Texas said in an email to supporters. “When Texas Values arrives in San Antonio they will focus on spreading lies and misinformation all intended to vilify our LGBTQIA friends and families. We cannot let their dishonest and hateful agenda shape the future of the community we live in.”

“Equality Texas is working with local students, families, and civic engagement groups such as MOVE San Antonio, PoltiQueers, Fiesta Youth, and others to defend the policy from those who want to undo the progress we have made in San Antonio public schools,” Smith added.

The SAISD board of directors is set to meet on the evening of September 11 at 5:30 p.m. at 406 Barrera Street. Equality Texas plans a press conference at 5 p.m.

Comedienne Poppy Champlin is coming back to San Antonio on September 20 with her unique comedy revue, The Queer Queens...