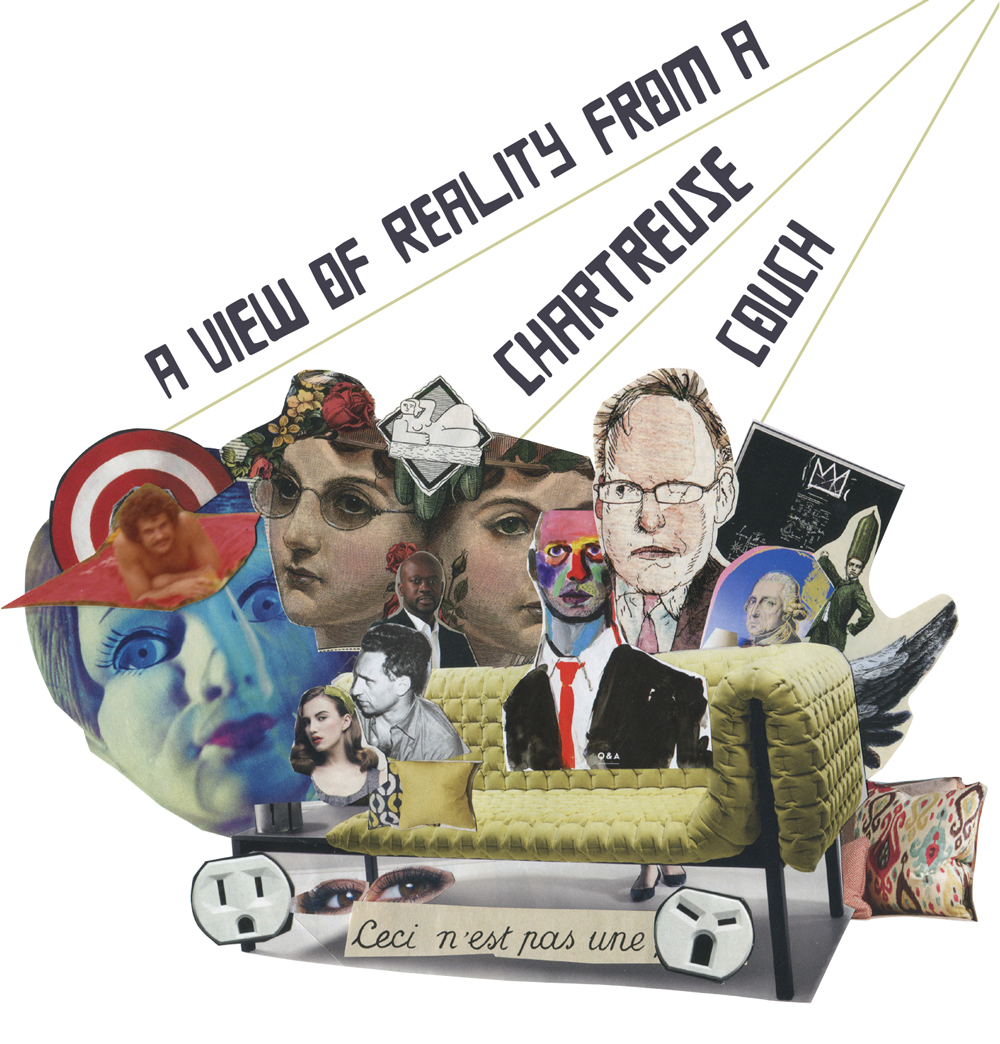 *My Own Private Alamo. Original collage by Gene Elder

Gene: So, Chris, we finally get you on the Chartreuse Couch. There are several topics that I want to inquire

about. As you have heard, In-Queering minds want to know–such as your current opinion about art, and your deep thoughts about the San Antonio River, your vision for downtown development, UFOs, political art–my favorite–and whatever else comes to mind. So, you pick. We have plenty of time. Just sit your butt down on the Chartreuse and feel the love.

Chris: Oh, let’s start with the Esquire and the San Antonio River. That’s always a good place to start.

Gene: Yes, it is. Well how is that going with the Esquire? That was good of you to preserve this important history and keep it going.

Chris: Knock on wood. The Esquire is doing well! Food has gotten really good … thanks to Brooke Smith, our chef. Our cocktail staff, meaning bartenders and bar backs, are better than ever. Houston Eaves, our head bartender, is off on sabbatical in Oaxaca, learning more about mescals and agave spirits. Maybe he will come back with a mescal specially made for The Esquire. What is most exciting is that we are working hard on the river level now. It had been an old restaurant back in the ’80s or so. We will make it a very loungey space … without any fancy signs or calling too much attention to itself. We want it to be more of a discovery … or for locals in the know. It might be even darker than the Esquire, if that’s possible.

Gene: I like that “locals in the know” attitude. I think that is what the river needs. And then, El Mirador. Did you ever think you would be waist-deep in the restaurant business?

Chris: I initially dubbed myself “the reluctant restaurateur.” Then someone asked, “Now that you have two, does that mean you are less reluctant?” I have to plead guilty.

Basically, our intent is to bring El Mirador back to its origins–pretty much farm-to-market Mexican with some Tex-Mex. Believe it or not, some of the cooking was French influenced; Doña Mary was a chef. The bar area will be remodeled and the outdoor patio off the bar expanded. I’m not a fan of the patio out front in the parking lot; I think that makes for better parking! We also plan to expand on the planting that Diana Treviño started years ago … and, yes, all the fig ivy stays!

Gene: Your ideas are marvelous. And we are all glad to know our important history and favorite places to eat are in good hands. Well, let’s see, what’s next? How about door number 3, contemporary art–what do you think about that? And have you seen a UFO?

Chris: I’ve certainly seen a UFO in contemporary art! Contemporary art, what a big topic. … and, of course, my partner Rudy Choperena, when asked what he does now, responds, “Artist.” So I am enmeshed thoroughly in art.

My favorite contemporary art scene in SA is, of course, Artpace. Artpace has singlehandedly put SA on the map of worldwide contemporary art. The caliber and mix of artists curated by some of the top curators across the U.S. and abroad is simply jaw-dropping. Are the shows always super successful? Perhaps not, but Artpace provides an incredible laboratory for artists to expand, to dream, to experiment out of the limelight. We get to see local artists, national artists, and international artists truly put themselves out there. Pretty exciting stuff.

Gene: What concerns you about contemporary life?

Chris: Boy, Gene, you like asking the big questions. Maybe I’ll narrow it down to contemporary life in SA, OK? I am worried about urban sprawl and lack of a good urban transportation system–meaning a light-rail system or even long-term thoughts for a subway or some other solution that allows us to travel the city easily and efficiently. We may have one of the best bus systems in the U.S., but a bus doesn’t offer the same efficiencies. OK, maybe Japanese buses are punctual, but here buses are subject to the same delays we see when driving.

I worry about downtown being a vibrant, incredible urban place. We need retail, we need better designed parks. The re-dos of Main Plaza and Travis Park may have been valiant efforts, but they could have been so much better designed. We need street parking. New Yorkers have street parking all over the city. Why don’t we? I will say, however, that despite some of our deficiencies I wouldn’t trade living in San Antonio for any other city in Texas. We are the best kept secret in the state.

“I am worried about urban sprawl and lack of a good urban transportation system.”

Gene: I’m not so sure about this “secret” business: There is Alamo Plaza. And since you’re not any fun with UFOs, let’s just talk about architecture and Alamo Plaza. What do you think about that discussion and do you think Alamo Street should be closed off?

Chris: We may be less a secret than we used to be, but most of the U.S. sees us in the shadow of Austin. Most don’t know we have five Spanish missions. If  we succeed in getting the missions listed as a UNESCO World Heritage Site we just might get a little more attention. As to the Alamo, I don’t advocate closing Alamo Street. The plaza in front of the Alamo is fairly ample … and a lot of visitors who are here for a very limited time like to do a drive-by. The whole plaza, however, could use an upgrade. It would be nice to use past designs of the plaza, starting with the initial layout of the Alamo in 1718, to assist in the ultimate design. Not that I’m advocating for a “restoration,” but I think historical references could be interesting. It would be even nicer to see a search for a top landscape firm. Houston just hired Thomas Woltz for the $200-million revamp of Memorial Park. He spoke here this last spring. It was one of the best talks I’ve heard in years–smart, thoughtful, intensely researched work. We need someone similar … if not Thomas himself!

While we are on the topic, let’s talk about architecture around the city. You’re an architect, are you not? Tell us about some of your favorite architecture in San Antonio.

Chris: The most often overlooked little jewel has to be the Spanish Governor’s Palace. Tucked away near City Hall, it gets little attention and is certainly one of the most significant early buildings remaining in SA. Best house may just have to be the Marshall Steve’s house that O’Neil Ford designed with Chris Carson as project architect. It’s Mexican-influenced, it’s modern, it’s crafted. It’s very San Antonio.

Gene: What I was going to ask next would be about architecture in other cities that impresses you.

Chris: I seem to be drawn to work that incorporates both art and architecture, and three or four immediately come to mind. The first is Chichu Art Museum in Naoshima, Japan, designed by Tadao Ando. It is an underground museum on an island that had formally been a leper colony. It features three artists: James Turrell, Walter De Maria, and Claude Monet. Monet looks as contemporary as the other work in this context. Extraordinary!

I’m also a big fan of Peter Zumthor, the Swiss architect. We visited his spa, Therme Vals, a couple of hours out of Zurich. You get to marvel at stunning architecture while exploring artfully designed thermal water pools of different temperatures.

Just recently we experienced Shigeru Ban’s new museum in Aspen. While a little controversial (it seems anything that moves beyond the norm is; you and I sure understand that), it has really raised the bar for architecture in Aspen.

The place I most want to go is James Turrell’s Roden Crater.

Gene: Now we want to get your advice about ideas in other cities that San Antonio could learn from. You recently went to Santa Fe and you travel around Europe. What do other cities do that make them interesting?

Chris: Big ideas can be transformative. I’ve enjoyed cities that have committed to urban parks, and to major urban art: Millennium Park in Chicago, the High Line in New York, for new examples. Tuileries in Paris, English Garden in Munich, for older examples.

“I’ve enjoyed cities that have committed to urban parks, and to major urban art.”

Chris: Let’s get some art in Brackenridge Park!

Gene: That sounds like a bumper sticker. I hope everyone heard that. We should print up some bumper stickers. Good idea. I always let my guest ask the last question. What would you like to know? You can ask me anything. Wellll, not anything. I don’t know everything–it’s hard to tell but it’s true. And then you can sign the couch.

Chris: Tell me a little more about the HAPPY Foundation and/or, better yet, what is your favorite memory of Hap Veltman? He was such a force in San Antonio. He was inspirational to me.     .

Gene: Well, I am glad to hear that you were inspired by Hap. He did serve a great purpose in pushing San Antonio along. I think the most valuable lesson that Hap leaves with us is the way he was really curious about everything and incorporated all these disciplines into his businesses and restaurants. Of course, you are a perfect example of what he believed in: respect for the San Antonio River, downtown business and growth, being an entrepreneur, a history enthusiast, supporter of the Conservation Society, interested in contemporary art, lover of architecture, and out. And Hap would figure out how to integrate all that into his businesses. All those interests at one time was a new and fresh idea. On top of that, Hap encouraged everyone to be his supporter and join the parade. That in itself is a rare quality. Now we see that many of us think this way. The Bonham Exchange is a good example of all this. And, of course, in 1973 putting me in charge of a gay disco would be his gift to me. I really cannot believe I had that opportunity, to have a front-row seat to the gay-rights movement. I always felt I should have gotten a certificate in psychology from that experience. My, my, my, what I learned about the gay world night after night, talking with gay men and women and drag queens from all over Texas. We are where we are now in the gay civil-rights movement because Hap took a chance opening a gay disco in 1973. This was right during the Watergate-investigation era. Who knew what would happen? Very brave and forward thinking of Hap–while the Nixon White House was lying about everything the gay community was trying to tell the truth.

I do hope the HAPPY Foundation will outlive us all as a tribute to Happy and as a repository of our history at this time. History may not seem like much to us now, but it will to future generations who don’t know us and will enjoy knowing how fabulous we were. I want you to be sure to take lots of pictures of you and Rudy and be sure you write the dates on the back.