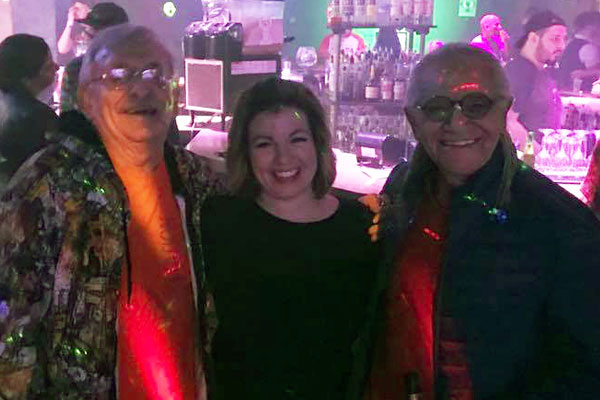 They say loose lips sink ships but in the case of Fiesta Cornyation a bit of tequila “truth serum” led to to revealing the name of the next King Anchovy during the 80th birthday party for Cornyation founder Ray Chavez on October 21 at the Bonham Exchange.

A post on the Fiesta Cornyation Facebook page announces: “Happy birthday to our fearless leader Ray Chavez and congratulations to King Anchovy LIV Mindy Miller Hill! Thanks to King Anchovy Emeritus Justin Arecchi for being with us to celebrate. Thanks also to tequila, the ultimate truth serum!”

Most years, Cornyation organizers reveal the name of the new King Anchovy after the holidays. However, it appears the spirit of celebration at Chavez’s soirée provided just the right atmosphere for the early announcement.

Hill is a graduate of Texas A&M University where she received a degree in Recreation, Park & Tourism Sciences. She is currently director of Destination Sales at the JW Marriott San Antonio Hill Country Resort & Spa. Prior to that, she worked at Marriott Rivercenter and the San Antonio Convention & Visitors Bureau (now known as Visit San Antonio). In 2017, she was on the list of Man and Woman of the Year Candidates for the South Texas Chapter of the Leukemia and Lymphoma Society.

As King Anchovy LIV, Hill will preside over six performances of Cornyation, billed as “the raunchiest, cheapest event of Fiesta.” The shows will take the stage from April 23 to 25, 2019 at the Charlene McCombs Empire Theatre.

Cornyation is one of the most popular events held during Fiesta San Antonio, typically selling out weeks ahead of time. It has donated over $2 million to local charities over its life as a nonprofit organization.

In recent years, Cornyation has raised around $200,000 annually. Past recipients of those funds include the San Antonio AIDS Foundation, BEAT AIDS and the Thrive Youth Center for homeless LGBT youth.

Your Ballot is Your Voice: Early Voting Begins on October 22