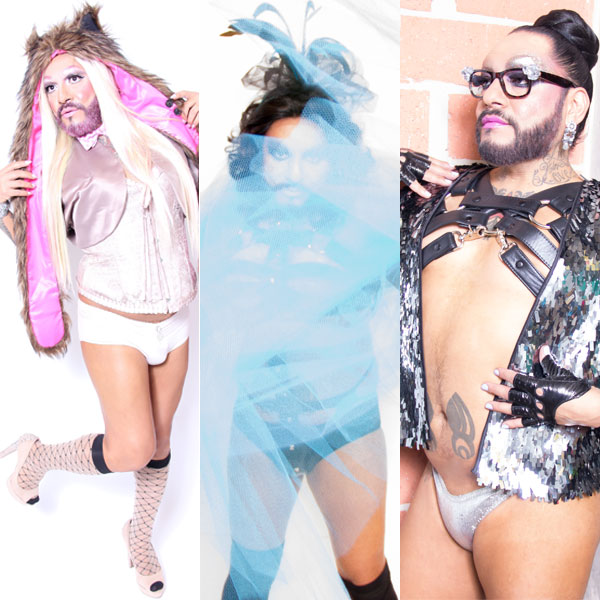 A one-night multimedia installation will examine the concept of gender fuck, the process of consciously and conspicuously challenging traditional ideas of the gender binary often through androgyny, hyperbole, or cross-dressing.

The images, which began as photographs by Julian P. Ledezma, were printed on canvas. Afterward, Magz altered them with paper, clay, acrylic gel, pencil, and acrylic paint. “On them are various memories, short stories and or dreams,” says Magz.

The evening also features a short film created in collaboration with award-winning, local filmmaker Hector Bojorquez. According to the press announcement, the reel is a 12-minute “exploration into beauty and non-conventional binaries. The success of the original exhibition in Austin inspired further co-creation into a lengthier short film that will be submitted to experimental and LGBTQ film festivals.”

“Gender fuck is a simple idea that non-conventional beauty plays hand-in-hand with non-conventional gender binaries. One simply does not exist without the other. Magz wanted to share an intimate yet whimsical point-of-view that would help everyone understand that no matter who or what you are, we are all simply human first,” says press spokesperson Dino Foxx.

Magz’s installation was first presented in Austin at the Ground Floor Theater. “Attendees were brought to their feet after a powerful talk-back with the artists. Now the show returns to the creators’ hometown where attendees will be treated to a never before seen live performance art component performed by Magz’s alter ego, Maxxy Radd,” says Foxx.

Gender F♡ck by Logan Magz was created with support from Allgo, a statewide queer people of color organization and in part by the Cultural Arts Division of the City of Austin Economic Development Department.

Gender F♡ck by Logan Magz, Saturday January 23, 2015 from 8 to 10 p.m. at Lucha Art Gallery, 316 N. Flores. Admission is free. Complimentary sweets and drinks. Guests are encouraged to attend in their interpretation of gender fuck.

On the 2012 hit single “Same Love,” a call for greater acceptance of same-sex love within hip-hop culture and beyond,...