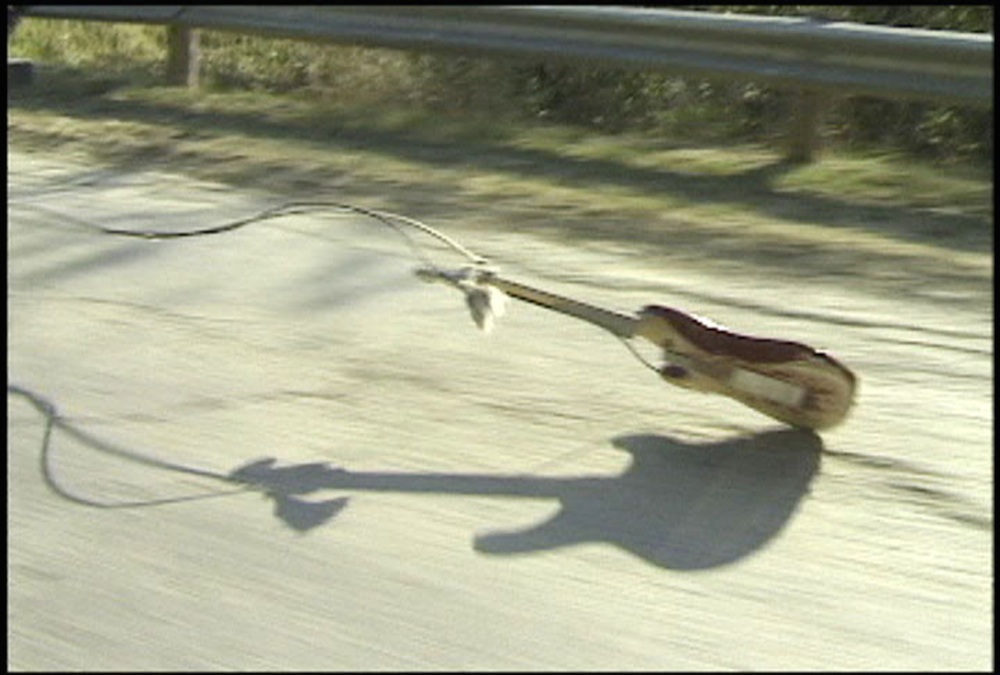 “In other countries, the reference to James Byrd is kind of lost, but the violence is

very much there and present.”

As an Artpace International Artist-in-Residence in 1999, Christian Marclay produced a 14-minute film titled Guitar Drag depicting an amplified electric guitar being dragged along a Texas road by a pickup truck. As part of Artpace’s continued 20th-anniversary celebrations, the short film makes it Texas premiere 16 years after it was first created. Guitar Drag is on view at Artpace’s Hudson (Show)Room through August 30.

The short film evokes the rock star practice of smashing guitars on stage during a concert and the possibility of new sounds as it is dragged across asphalt and dirt.

It was also a response to the 1998 murder of James Byrd Jr., a 49-year-old African American man in Jasper, TX. On June 7, 1998, Byrd was walking home by himself, when three white males approached him. He was severely beaten, tied by his ankles to the back of their pickup truck, and then dragged for three miles. His decapitated body was later found at the entrance to the town’s African American cemetery.

In 2009, President Obama signed into law the Matthew Shepard and James Byrd Jr. Hate Crimes Prevention Act.  Shepard and Byrd were victims of separate but equally horrific hate crimes in the same year.

Marclay first learned of the incident after reading an article in Time during a flight. A photograph of a pickup truck with TX license plates struck Marclay and later became the impetus for the project.

“As much as I was shocked by the violence–it seemed so barbaric, but because it was a race crime, I felt uncomfortable addressing it as a white artist,” Marclay explained during an exhibition walk through at Artpace.

It was not until discussing it with fellow Artpace Artist in Residence Isaac Julien that he felt comfortable embarking on the project. Julien, a black British artist, suggested to Marcaly that he should do it. “In a way, he gave me the courage to do it,” Marclay said.

Due to its controversial nature however, Guitar Drag was never screened. Marclay chose instead to display a set of newly invented “instruments” he had created in the storefront of the neighboring Alamo Music Center. “Because it was at the end of my residency, I never showed it here,” Marclay said. “I didn’t really want to be controversial or revive something that was still so present a year later. The murder happened in 1998 and I was here in 1999.”

In the 16 years since, Guitar Drag has been screened all over the world and even had an accompanying “soundtrack” released at one point.

“In other countries, the reference to James Byrd is kind of lost, but the violence is very much there and present,” Marclay said. “The reaction changes depending on where you show it.” He said he has seen teenagers walk out of a screening totally “exhilarated” by the idea of destroying a guitar, but that he has also seen people walk out in tears. “It really depends on how you approach the work. I want the work to be open to all these things. I never want to define the work. I think both reactions are totally acceptable and correct.”

Interestingly, Marclay says he still owns the guitar used in Guitar Drag and has kept it in storage all of these years. “The guitar actually never broke. It was quite amazing.”

The City of San Antonio's Department of Culture and Creative Development and the Parks and Recreation Department are sponsoring the...