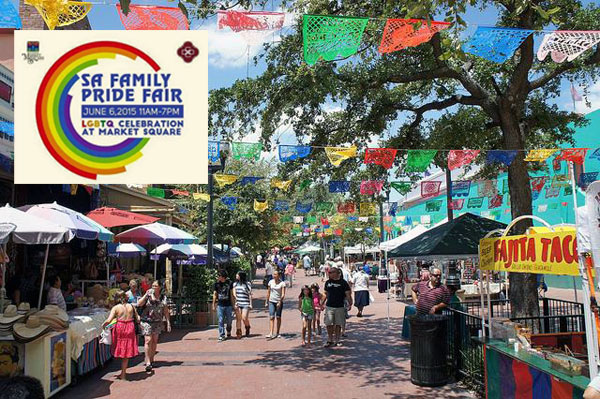 The SA Family Pride Fair will be held on June 6 at Historic Market Square.

The City of San Antonio’s Department of Culture and Creative Development and the Parks and Recreation Department are sponsoring the first annual SA Family Pride Fair on Saturday, June 6 at Historic Market Square.

The event will be a kick off to Pride Month which is observed worldwide during the month of June. It also marks the first time the City of San Antonio is underwriting the cost of an event to spotlight the LGBT community.

Market Square hosts countless festivals and fairs throughout the year, attracting crowds with the lure of food, music and a colorful location. This new event appears to fit that template which is designed to bring people to the West end of downtown and to the businesses that make Market Square their home.

According to promotional material, “Everyone is invited to bring their families to learn in a relaxed and festive atmosphere, about Gay, Lesbian, Bisexual, and Transgender programs and services available in the community. This first-of-its-kind event will include food booths, musical performances, give-aways, and other family-friendly activities. Admission is free.”

The purpose of the event was outlined in a letter to participating organizations by Sebastian Guajardo, the special projects manager for the Department for Culture and Creative Development and one of the main organizers.

“The goals of the event are to celebrate with PRIDE San Antonio’s diversity, provide opportunities for families to learn about Gay, Lesbian, Bisexual, and Transgender programs and services, and to support the health and well-being of San Antonio’s community including youth and empowering them in building a future where all people are accepted.”

Entertainment for the event has been coordinated by the San Antonio Queer Collective and will include performances by Azul, Pink Leche, Saakred, Bianca Sapet, Los De Esta Noche, and Langton Drive. DJ’s will be Neto and Celeste Le Sneak.  Emcee for the the performance stage is Dino Foxx.

Texas Public Radio, Out In SA magazine and the San Antonio Current are media sponsors.

This will be the second time in recent history that San Antonio will have two Pride observances. For many years, Pride San Antonio coexisted with PrideFest, an event that ended in 2012 after board members revealed that they had racked up a $23,000 deficit.

The SA Family Pride event on June 6 is different from Pride SA in that it is not a fundraiser.

This year, Pride SA will hold its annual festival and parade on July 4. That event usually attracts several thousand people to the Main Avenue Strip in the heart of San Antonio’s “gayborhood.” Pride SA also sponsors several other events throughout the year including a softball league, a volleyball tournament and a bowling tournament. Over the last 12 years, Pride SA raised about $100,000 for their beneficiary organizations.

Though their group was small, their message was clear; Tania Bruguera should be free to practice her art. Standing in...