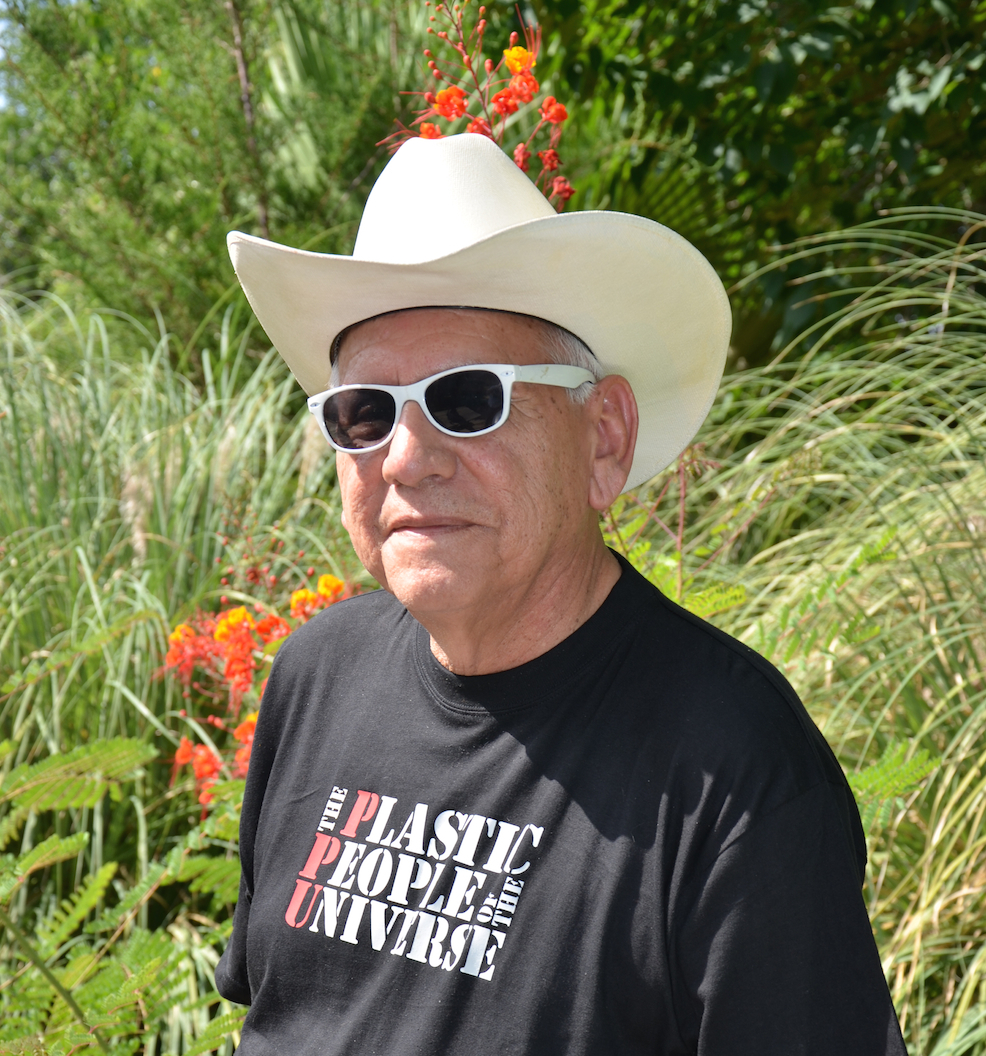 Gregg Barrios. Photo by Bryan Rindfuss for Out In SA.

When he was a young man in Victoria, Texas, playwright, poet and critic Gregg Barrios joined the Air Force medical service, encouraged by uncles who had served in the military during the relatively peaceful years that followed World War II. U.S. involvement in Vietnam consisted of 16,000 “advisers” when he enlisted. By the time he was discharged four years later, it was a full-scale war, with more than a half-million troops on the ground.

“I got to see a lot of young people my age dying, when they should have been about to be dating,” Barrios said.

Like many survivors of the Vietnam era, he became an anti-war activist after his service ended, a trajectory that led to a life of social and cultural criticism, including his own literary insurgency: Rancho Pancho, his play about the Latino from Texas who was Tennessee Williams’s lover and, Barrios argues, the real model for Streetcar‘s Stanley Kowalski.

Barrios is one of 10 veterans who will recount their stories for Telling: San Antonio this week at the Tobin – and he is anything but bitter about his service.

“It exposed me to people outside of Texas, and many of them were not as prejudiced as people are here,” he said. “I think that opened my outlook on life.”

While he was stationed at Bergstrom Air Force Base, he was able to take advantage of night classes and cultural events at the University of Texas at Austin, including an appearance by Norman Mailer. Barrios brought a secondhand copy of The Naked and the Dead, Mailer’s World War II novel about the Philippines Campaign. After the reading, he approached the author to ask him to sign it. Mailer eyed Barrios’s dress uniform carefully before asking him where he was from.

“He said, ‘One of my best buddies in the service was a young Latino man,’” Barrios recalled. Later, when Barrios read the book: “It was the first time I’d ever seen a Mexican-American in a major American novel, and it just blew me away.”

Barrios “was not at the point where I identified myself as heterosexual or homosexual,” when he enlisted, but coming from a small town in South Texas, he didn’t find the military oppressive.

“Looking back, I see it was the military that first desegregated – the barracks and the ranks,” Barrios said. “Then you can fast-forward to stupid ‘don’t-ask, don’t-tell’ is no longer there.”

But Barrios would not necessarily encourage his younger self to enlist today. He’s troubled that the end of the draft means that the country is divided into people who are invested in our military engagements, and people who are not – including presidents who haven’t served, and he fears are too quick to send other people’s children to war.

And, as he reminds the audience in his Telling monologue, we’re quick to forget our “wounded warriors” once they’re back home.

“I bring up the homeless Vietnam vets, in a sense abandoned by society and the military,” he said.

Since playwright Jonathan Wei launched The Telling Project in 2008, it has put veterans and their families onstage in almost 20 cities. Barrios is one of two vets in Telling: San Antonio from military campaigns that pre-date our current Middle East quagmires. Most of the participants served in Iraq or Afghanistan, he said, and he’s excited that more than half of them are women. “It brings a different kind of take on the whole military experience,” he said.

During tech rehearsal Tuesday night in the Tobin’s Carlos Alvarez Theater, the sound of the Experience Hendrix concert rolled in through an open catwalk door. Out In SA noted that Paul McCartney would be playing the the H-E-B main stage during Telling’s opening night: What would be an appropriate background song?

“‘Why Don’t We Do It In the Road’” Barrios suggested.

His fellow vets, he promised, “are very open about how they had to serve and under what conditions.

“So it’s not all ‘God Bless America,’ etc. Not that all of us aren’t devoted … but there’s a lot to be done to make it better for service members and their families.”

QSanAntonio joins Out In SA

On October 1, QSanAntonio.com joined forces with Out In SA as part of their new web site and quarterly print...