Tech. Sgt. Jamie Hash re-enlisted in the U.S. Air Force in a ceremony at Luther's Cafe on November 15. (Photo: Parker Radbourne The PK Photographs via Facebook)

A transgender airman stationed in San Antonio at Joint Base Randolph says she chose to re-enlist in the U.S. Air Force as a way to show that trans people can serve honorably in the armed forces. “I feel that it’s critical I continue to serve for those who cannot,” she told the San Antonio Express-News.

Tech. Sgt. Jamie Hash, who re-enlisted on November 15, was referring to a proposed policy announced in March by the Trump administration that bans transgender individuals from serving in the military except under “limited circumstances,” insisting they pose a threat to military readiness.

The new policy has been stalled in the courts by three lawsuits brought by current and aspiring military members who are transgender. However, on November 23, President Donald J. Trump asked the Supreme Court to uphold the ban even as those cases make their way through federal courts.

Luckily for Hash, she is among those who began to transition under the previous policy and who can continue to serve openly.

In a re-enlistment ceremony at Luther’s Cafe on the Main Avenue Strip, Hash took her oath, which was administered by her former flight commander, Capt. Dawnisha Peagler.

Hash’s partner, Emily Gerson, was there with the couple’s dog Bacchus and a group of friends. Army veteran Danny Ingram, a member of the local chapter of the American Veterans for Equal Rights (AVER) and Staff Sgt. Chelsea Serviss, who works with Hash, held a U.S. flag behind her as she recited the oath.

“This week is Transgender Awareness Week, and I believe that recommitting to serve this country as an out and proud transgender person is the best way that I can spread awareness and be visible for those who can’t be,” Hash wrote in a Facebook post. “Here’s to the honor and privilege of six more years of service.”

Hash began her Air Force service in 2011 working as an aircraft armament systems technician and was eventually deployed to Southwest Asia. After returning to the U.S., she retrained as a manpower analyst and was stationed at Joint Base Randolph. It was during this time that Hash decided to come out as trans to her superiors and to the rest of her unit. 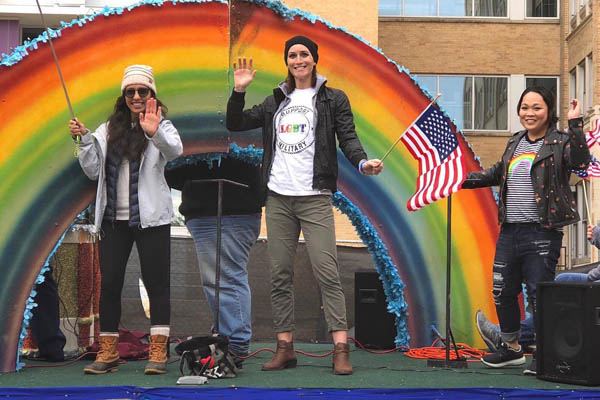 During her time in San Antonio, Hash has been active in the community, serving on Mayor Ron Nirenberg’s LGBTQ Advisory Committee and taking part in local events. She recently participated in the Veteran’s Day Parade where she rode on the AVER float with veterans and service members.

Hash will soon complete her Master of Science degree in Organizational Performance Improvement. In August 2019, she will leave San Antonio and begin a new assignment at a U.S. installation in England.

In that article, Fram asked Hash what she wanted people to know about transgender members of the military. “I believe transgender service members are more resilient, because we all have to be publicly vulnerable and authentic in the face of potential judgment in ways that the majority of other military members do not go through,” Hash responded.

“Since I’ve been able to be my true self at work, I have been more engaged and outgoing, and I have excelled professionally and personally. It has actually helped me get closer to many of my fellow Wingmen and it has bonded us more as a team,” she added.

A rainbow mural located in the heart of Houston's LGBT neighborhood has fallen victim to vandals who defaced the wall...