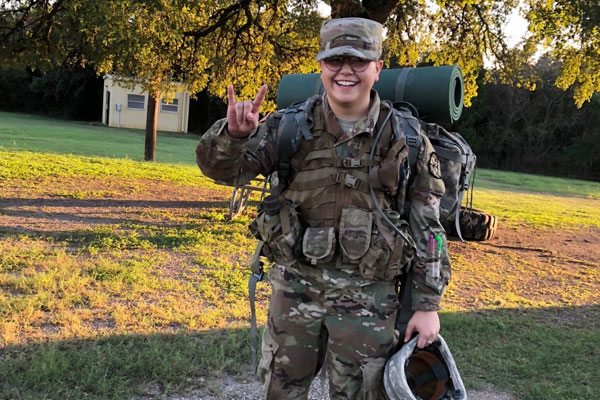 A trans student from San Antonio who attends the University of Texas at Austin has lost his three-year Army ROTC scholarship as a result of President Trump’s newly-instituted policy banning transgender people from serving in the military.

UT freshman Map Pesqueira’s scholarship was voided by the Department of Defense on April 12, the day the new policy went into effect.

The new regulation blocks trans troops from serving in the military and forbids use of federal funds to pay for gender affirmation surgery. All transgender soldiers currently serving will be allowed to remain in uniform. However, going forward, trans people can serve only if they remain their biological gender.

“Since I’ve already had top surgery, hormone replacement therapy, gender marker and (a) name change, I can’t go in under this policy,” Pesqueira told the Daily Texan. “I’d automatically be discriminated. I really do see (Trump’s policy) as a waste of resources, money, time and personnel.”

The Daily Texan reports that Lieutenant colonel Matthew O’Neill, UT’s army ROTC department chair and Pesqueira’s military science professor, attempted to keep the student’s scholarship from being rescinded but was unsuccessful in his efforts.

Pesqueira’s situation is further complicated because the scholarship was covering the total cost of his education. Without it, he may not be able to continue to attend UT. “If UT Austin isn’t able to help me get back to school, I’m going to have to come back and go to community college just to get myself back on my feet,” he told KSAT-TV.

In an effort to raise funds for his education, Pesqueira started a GoFundMe page which as of April 17 has raised over $8,000.

On the GoFundMe page, Pesqueira, who is a Radio/TV/Film major, writes, “Since I was a kid, one of my biggest dreams was to pursue a career in the Army to serve my country. While growing up in a military city, my dad often took me to the Fort Sam Houston Army Base for public events and I was always captivated by the uniforms the service people wore, knowing that they belonged to an elite team rooted in pride and unity that protects our country. That was my inspiration for wanting to be a part of the military; that it wasn’t about the individual, it’s about being involved in something incredibly larger than myself.”

The State Affairs committee of the Texas House of Representatives has scheduled hearings on April 17 for what Equality Texas...